Who you callin' porky?

Way back at the first of August, WordVixen tagged me with a meme called show your face. I told her then I would get to it later but even I didn't figure it would take a month. By the way, to the best of my knowledge WordVixen was the first person to put up a link to this blog. Now I have displayed my hairy mug on this blog several times so this time I thought I'd give y'all a little something different. My answers to the meme questions will follow my take on the picture. 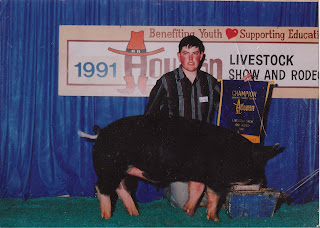 Yep, that rosy-cheeked, clean-shaven, baby-faced dork is me, circa. my senior year of high school. What you see there is 265 pounds of prize winning castrated swine. I'm talking about the pig now folks, back then I only weighed about 225 and luckily I still have all the parts God bestowed upon me.

As you can see from the board behind me this picture was taken in 1991 at the Houston Livestock Show and Rodeo. It must of been a hundred and ten in that show ring and I showed that pig for better than a solid hour before the judge pointed at me. If it had gotten any warmer I could have popped an apple in the pigs mouth and had a little baked ham.

Me and the pig, a Berkshire, were awarded breed champion. I guess technically the pig won, but I got to spend the money. How much money? $14,400 dollars and some change. Not bad wages for a high school boy used to earning $3.35 an hour at the feedstore. I had sold another pig for $2,800 dollars two weeks before at San Antonio which had paid my debt for the animals and their feed so the Houston winnings were all mine. This was February of 1991 and by summer of 1992 I was sporting the goatee that I have had ever since. (Except for one brief shaving incident in early fall of 97, but I try to forget about that.)

Okay, now back to the meme.

Blog title: One Word, One Rung, One Day
Description: It's at the top of the page but here I'll paste it here for any lazy people. One word ... because that is how all stories must start. One Rung ... at a time up the long, slippery ladder of success. One Day ... my name will grace the cover of a novel. A big, hairy Texan's pursuit to publish a novel

Name: Travis Erwin. Travis is a fairly common name here in Texas after William B Travis one of the fallen leaders in the Alamo. Legend has it I was almost dubbed Ty instead

Country: USA
Occupation: Postal Worker, but I use that last word loosely.

Email: travis @ donotspam traviserwin dot com (minus the do not spam, of course. Unless you're a spammer) I stole that directly from wordvixen
Birthday: December 21, 1972 Too bad I'm not a character in a fantasy novel 'cause all wizards born on the winter solstice have extra magical abilities. December 21st is the shortest day of the year which simply means you have a longer night in which to party.

Favorite color: Black - I'd say eighty percent of the shirts I own are either black or grey, but my reasoning is not nearly as noble as Johnny Cash's.
Favorite drink: Sweet tea for non-alcoholic and anything with Rum otherwise.
Favorite fruit: yeah right, like I eat fruit. This is my blog so I'm adding a new category.

Favorite dessert: A tie. Creme Brulee or Beignets. But both have to be consumed with a nice steaming cup of chicory coffee in the city of New Orleans.
Hobbies: Reading, writing (technically a hobby till it pays off), again stolen straight from Word Vixen. Hunting, fishing, and pestering, humoring and just generally harassing my wife and kids.
Some of the blogs I know that have posted pics of me: Like anyone else would want to scare off readers by letting the world know they associate with the likes of me.

Da Rules: Post a short article and include your photo. If you already have a pic online somewhere, get creative with a new one. Next, include a link to the others who have displayed their pic, or include their pic in your post, adding a reference to it.

I could tag you guys, but I'm not. However, I do expect at least five of you to pick up the ball and run with it. And think of me and my pig the next time you bite into a nice juicy pork chop.

Email ThisBlogThis!Share to TwitterShare to FacebookShare to Pinterest
Labels: blogworld, Me

Memes are a great way to get to know one another without being too invasive.

I think I posted an actual pic of myself on a few of my posts but I enjoy the incognito look that my current pic gives me. My Elvis wig and fake belly make me hard to recognize. Speaking of swine, we just got our supply from my wife's parents. Her dad is a farmer and they just slaughtered the pigs. It is so good. The best pork chops ever.

Whaddya do with the 14.4K you won for being the best of your type?

That picture always gives me a chuckle.

Awesome! Flashbacks are cool... shows us how far we've come.

Still thinking of a tome for you... since all of my books are currently in boxes (urgh!!) I'll need to think on this one :p

Keep writing about your writing! It's been a crazy year, but I need to get back in the seat...writers are a unique lot with so many "voices" in their heads just trying to get out!

Monnik- Yes I graduated in 91.

Angel- I agree it is kind of like interviewing yourself.

Mr. Shife - Next time you should dive in and bloody your elbows as well.

Alex- I bought an acre of land, a pickup truck, and the rest went towards college tuition and books.

Jenn - Like you need an excuse to laugh at me.

skiing red- flashbacks can be painful as well.

An acre of land and a pick up truck plus college? Impressive.

Cool post! I love the Favorite Meat question! It made me LOL.

Fourteen grand for showing a pig? And you left the pig-showing business to go to college? And said tootaloo to rosy cheeks?

I believe I have a pic of you and I without you wearing a black or grey shirt.

But the pig pic...You are right, I got a good holler out of that one. YESSIIIRRREEE...

And if I were you, I would write until my book sold and sell pigs on the side. Who needs the Post office?


And as for reposting. I believe I mention you in about every third or fourth blog with a link etc.. so you get that gratification from me on a regular basis and unless you come up in my particular story, which you might in the next day or two, you just have to rely on my usual crap.

Thanks for your kind words on the phone the other day..

You were a cutie! No wonder Jenn picked you up. Even if you are a bit of a copy cat. ;-)

I agree with chunks though- the favorite meat was a good addition. Like the answer too.

Now I feel old. Thanks Travis.