As evidenced by all these reviews I've been doing more reading than writing. The latest novel I read tracks a ninety-year-old ex-seminarian named Travis. Despite his age Travis has the body of a twenty year old. He also has an invisible sidekick. A demon he accidentally summoned from hell some seventy odd years ago. He's been trying to get shed of the monster ever since and now he just might have found a way to reclaim his solitary life. But, excuse the pun, the demon is hell-bent to remain on earth. 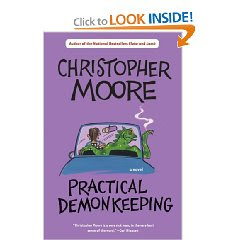 1) It's hilarious. I picked it up after a friend told me that Christopher Moore was one of the funniest authors he's ever read. An accurate description. The novel is chocked full of great lines and laughter inducing descriptions.

2) Great characters. Christopher Moore does a great job of weaving in the stories of multiple characters and an even better job of having each one play a vital role in the plot. Sure some of the characters are absurd but given that the entire plot is absurd, they are right at home.

3) As I said, the very premise of this novel is absurd, yet I read as if my life depended on it. The last few chapters had me in breathless anticipation. I finished the book on a day and a half because I simply could not put it down and walk away.

1) You are easily offended. As you will see from the page 33 excerpt, there is plenty of crude language and offensive material. It's funny as heck, but definitely not for virginal eyes.

2)You are unable to suspend your belief. Of course if you have no imagination, or toleration for those who do, what the heck are you doing reading fiction?

3) You do not like books that use a plethora of POVs. I found it easy to follow, but the author does hop around a good bit and it's not always easily evident where the story is headed when he first introduces a new character, but in the end it all comes together. If you don't like to keep track of a dozen or more POV characters this might not be your kind of novel.

3 Lines beginning with the 3rd sentence on page 33 of the novel.

"Look Pancho. I'm hungover, my wife just threw me out, and my life is not worth a shit. So if you want me to take messages, you can damn well tell me who the fuck you are. ..."

Email ThisBlogThis!Share to TwitterShare to FacebookShare to Pinterest
Labels: my reads

humor is such a delicate emotion. I might give this a try but it's hard to get me to laugh with fiction.

I will definitely pick this one up! Sounds right up my (reading) alley.

Travis, Christopher Moore takes up an entire shelf of my book case. I LOVE him! And you're right, some people might find his books offensive. I once recommended "The Stupidest Angel" to a book group, and they really felt uncomfortable with his humour.

Give me dark humour, and I'm a happy reader. I've since limited my book club attendance. (Edgy reads aren't on their menu.)

Travis, I absolutely love Christopher Moore. His dark humor cracks me up. I've read this one and it is hilarious.

I've read "The Stupidest Angel," and it wasn't my favorite, but I still enjoyed it. I loved "You Suck: A Love Story," "Blood Sucking Friends," and "A Dirty Job," but my favorite has to be "Island of the Sequined Love Nun."

Sounds absolutely lurvely. I will definately need to check this book out.

Somehow I think you and share the same taste in books. :D

I'm all about belief suspension... Sounds like a good read. I'll definatly check it out.

ok.. I just wrote down the name of the author!! I am soooo getting a copy of this one

You are such a positive person I can see the difficulty you have in finding three things not to like in a book!

I'll have to check it out. Not sure I can deal with that many POV changes, but it sounds worth looking into. Thanks for the review!

Hmmmmm, an invisible but actual side-kick?
Wait'll ya read about mine . . . heh, heh, heh.......Bwaaaaaaahhh!
Aloha, Travis-

Thanks for the tip.

IMO, humor is humor, no matter where it's written into. I don't think I can read straight humor from cover to cover, but when it's liberally sprinkled in with other types, then I have no problem with it.

Since I have read all of my favorite author's books, I just may see if the library has this one. It sounds pretty good!

my favorite Christopher Moore book is Lamb...another gospel of Jesus told by his best friend Biff...totally hilarious!! But only if you don't take your religion too seriously....

Christopher Moore is one of my favorite writers, specifically Lamb. I have the leather covered version that looks like a bible. Yes, I'm commenting on a very old post, but I just really love Christopher Moore.