Quick! When I say Morocco what's the first thing to pop into your mind?

Me? I think desert. Sand, heat, and sweat follow that thought.

I've seen Aladdin. I've even been the the Morocco section of the world showcase in Disney. They made a very fine Sultan Colada by the way. Matter of fact i was standing in line for either my second or third serving of the tasty rum filled drink when Jasmine, Aladdin's girlfriend, brushed past me, rubbing her girly jewels against my arm on the way out to sign more autographs. My wife claimed it was an accident, but I'm fairly certain she did it on purpose. Sure Aladdin has a magi carpet, but he's also a baby-faced, goofy-acting pipsqueak. You can see in this photo of my oldest son and our friends daughters that Jasmine doesn't even want to stand by him. Besides I think she dug my goatee every bit as mush as the Genie did. 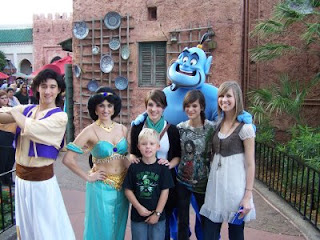 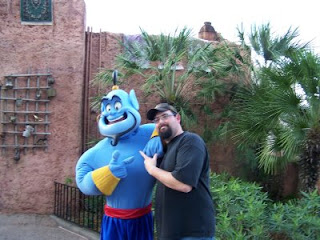 But I digress, back to Morrocco. Along with the Disney influenced opinion of Morocco there is also the few tidbits of info I gained from an episode of Bizarre Foods starring Andrew Zimmern on the Travel Network. You know the bald guy that covers the globe eating all kinds of weird and gross food. Usually he swallows it right down but in that Moroccan episode he actually gagged on some rancid meat dish call K'lia. He also strolled around where there were roasting goats and other things in the marketplace.

So here is the tally when it comes to my idea of Morocco. Desert. Sand. Heat. Lots of hot sweaty people. Aladdin and his monkey. Jafar and his Parrot. Rancid meat and egg dishes. Goats roasting on the street.

Now the big question. How to you reckon all of that stuff smells combined together?

If you guess like the drainage ditch out behind the zoo than you are riding the same camel as me my friend.

So imagine my shock when my wife comes home from the store with this.

Really? Moroccan Bazaar. That is the best the marketing people at febreze could do?

Okay so the can describes the scent as inspired by the fragrance of fresh-ground ginger that fills the air in the spice markets of Casablanca. Well play it again Sam, why the heck didn't they call it Casablanca Spice Market, or simply Casablanca, or Casablanca bazaar. I'm willing to bet Bogart smelled better than Aladdin.

And while the scent isn't all that bad I'm still not a big fan of air freshener scents. It's not like you are fooling anyone. No one ever walks into a bathroom and says, wow, I thought you were taking a crap but I guess you were grinding ginger. And yeah I know poop stinks, but these cans of spray only add to the aroma. Feces and Ginger. Doesn't quiet have the same ring as Astaire and Rogers does it?

I'll dance on out of here, but ladies explain your fascination with bathroom spray? Riddle me this ... What's wrong with lighting a simple match?
Posted by Travis Erwin at 2:32 PM

Email ThisBlogThis!Share to TwitterShare to FacebookShare to Pinterest
Labels: a strange world, I'm a Doofus, Riddle Me This, The Family

"No one ever walk into a bathroom and says, wow, I thought you were taking a crap but I guess you were grinding ginger."

That may be the best line I have read yet this year.

Having been to an actual Moroccan bazaar, I can tell you it's not something you'd want to spray around your house.

I'm not obsessed with bathroom sprays, hooray! I've never understand how people think that $h!t + lilac smells better than just $h!t, but maybe it's just me.
As for what Morocco brings to mind; the fez.
(Ironically, I just watched Aladdin on TV the other day.)

ROFL. Travis, how do you think these things up? I agree, light matches, just not too close to the methane.

I live with three guys - I wish they would use matches!
Guess I'm paying for all those years of telling them, "Don't play with matches!"

ROFL! Being allergic to all those air fresheners I don't use them at all. Instead, there is a wonderful thing called an exhaust fan, which can be found in most bathrooms these days. Or matches work.

Lighting a match is much more effective than gross room freshener.

I agree with Laura. That sentence is the best in a long time.

I agree with Laura K on this one... I laughed for a solid 5 mins when I read that line!!! OMG too funny

Haha. Now I REALLY don't want to go to a Moroccan bazaar.

However, I've found that some sprays are better than others in getting rid of the "smell."

*sigh* More Disney reminders. We're looking into taking the twins this summer, but aren't sure. Four years old just might be too young yet...

All that gas and a match striking equals an explosion, but I bet you already knew that.

You crack me up!!

Food scents in the bathroom are gross. I use air freshener there, but it's chamomile and lavender or something like that. Or Spring Breeze.

Lighting matches just isn't a good idea when you are raising a brood of boys.

"wow, I thought you were taking a crap but I guess you were grinding ginger"

You crack me up BIGTIME!!!!
Aloha-

ps: The reason for the spray or stick of insense is in your mirror and my husbands. LOL

Actually Morocco brings to mind: couscous, a wonderful wheat concoction to go with any type of meat dish.

Poo spray is important. I do not care if it mingles with the poo smell it is just polite. Goes along with the good old courtesy flush.

I totally could not see where this post was going! Loved it!!

There is no room for fresheners (scented or not) in our bathroom. I must admit that I liked to use the standard febreeze product when I had the dog - especially when he was wet.

And, I agree with the others about your ginger grinding comment ... zomg ... very witty, as always!

I have a friend from Morocco & she's shown me all the photos & told me great stories of her life there & I so want to go someday...it looks beautiful...but I'm guessing the room spray smells like sweat & camels...ugh.

Oh my crap, you have made me laugh and laugh this morning!!!!
Thank you!
"No one ever walk into a bathroom and says, wow, I thought you were taking a crap but I guess you were grinding ginger."
Frigging CLASSIC.

I just shared this post on my Google Reader. :)

I prefer a candle over bathroom sprays. (Plus, you get to light that match--double the effect!)

I prefer a candle over air spray. (Plus, you get to light that match--double the effect!)

LOL!!! Ok you have me laughing hard! GRinding Ginger?? I'm sharing that with my husband! And I use Lysol. At least it smells like you were cleaning the sink afterwards.

You got it dead right Travis.

Having been to a Moroccan Bazaar as well as bazaars elsewhere in North Africa, Arabia and Afghanistan, I can tell you they all have a common smell.

And it ain't somethin' I want in my house!

Floral poop smells better than burnt poop in my opinion. Kind of like working in a garden with fertilizer...the other is like a burning bag of crap.

I actually had tears from this one... well done!

I've had a dream about morocco. It involved sand, and giant dragonflies upon which people flew.

Thanks for stopping by anytime I can jog a memory for someone it is great :) stop by anytime :)

When it all boils down (as it does) they all smell of chemicals after the first two minutes.

You are hillarious!!! We simply open the window, works every time!!

You are hillarious!!! We simply open the window, works every time!!

I can't wait to see the Google Ads for this one.

My brother-in-law is Moroccan. I'll have to remember to ask him about the dish.

I wrote a post on this very topic not that long ago. I can't stand when someone sprays something "fruity" or "flowery" to try and mask the stench of fecal deposits. I think if you don't want your shit to stink either light a match or buy some ninja drops to kill the odor. If you can't do either of those then let it stand as is and blame the dog or the kids. ;)

I've been to Morrocco and what I remember is a lot of naked sunbathing and then the reverse once you left the hotel.

And the henna tat scarred my arm for several months.

I don't think I'd name a Febreeze scent after the place though, I AM a light-a-match kind of a girl.

OH MY GOD! This entire post has me cracking up! Yuo had quite a few zingers here. :)

I'm on the side of the match, personally. I hate air freshener.

Laughin out loud! I'm anti-spray so is hubby. We keep a large box of wooden Kitchen matches next to the toilet.....