Throw Me A Rope

One example gone awry and there I was, neck deep in quicksand. 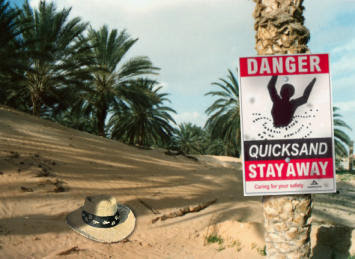 I've mentioned before that I have undertaken the pleasurable task of guiding a literature club for the Catholic School where both my boys attend and my wife teaches. The club is made up of forth and fifth grade students and we split our time between discussing the craft of writing and discussing books. This first semester we have been discussing Erica's fantastic YA novel, Magickeepers.

Yesterday we finished up our discussion of the novel as well as my planned talk about the craft. So I opened up the floor for questions.

Several inquiries in, one little girl asked, "Why do some authors change their names?"

I explained that some people wanted to keep their true identity secret and others changed it because maybe their name was too hard to pronounce or even another famous writer shared their name.

The same little girl then said, "But what about the lady who wrote Harry potter? She used her initials but everybody still knows who she is?"

"Well," I explained. " I have read that she went by her initials because someone, an agent, editor, or maybe marketing person thought young boys would be more likely to read the series if they did not realize a woman had written it."

At this point several of the little girls chimed in, "That's dumb. Boys are babies. they should know girls can write good books as well as they can."

I agreed but said it goes both ways. "Sometimes men who write romance books have to change their name so people will think a woman wrote it."

And then, I really blundered.

Pointing to a sweet and innocent looking little girl in the front row I said, "What if Mackenzie (name changed to protect the innocent) here wrote a book about spies or serial killers? no one would ever believe a young girl like her could write a good novel on those subjects so she would have to pick a pseudonym.

Thinking I had sufficiently answered the question I said, "Next question."

A blond little boy raised his hand so I called on him. "What's a serial killer," he asked?

I cringed, not wanting to try and explain this to a group of other people's children.

"That's not really important" I said trying to sweep my blunder under the rug. "I was simply trying to make a point that an author might need to disguise their gender to draw in their readers. Next question."

This time a girl stuck up her arm. She looked extremely pleased when I called on her. With a smile she announced, " a serial killer is a person that kills lots of people. isn't that right?"

Taking a deep breath I nodded. Yeah, but let's stick to talking about writing. Next question."

"Do serial killers cut off people's heads?" Came the next inquiry from a very eager young lad.

"If you want to know anymore about serial killers you are going to have to ask your parents," I answered. "It's not really my field of expertise."

"Why would anyone want to read a whole book about people getting their heads cut off?"

"How come they are called serial killers? Do they like to eat cereal?"

"Have you ever wrote a book about a serial killer?"

"Do you know any serial killers?"

No matter how hard I tried they questions kept coming, so finally I said, "Guys, we are supposed to be talking about writing and books you can read. I can hear it now, When class is over y'all are gonna run out to your parents car and when asked how was books club, the first words from your mouth will be, WE LEARNED ABOUT SERIAL KILLERS FROM MR. ERWIN. and guess what? That will be the end the end of me as your teacher, so unless you guys are trying to get rid of me let's please talk about something else.

One bright little girl threw up her arm and shouted, "Can I ask you about a book idea to see if it's a good?"

Pleased to talk about anything but serial killers I said sure.

I did the only thing left I could and called it quits for the day.

On the way home I thought man, do I respect teachers, not only for their wisdom and patience but their ability to avoid getting drug smack dab into a huge pool of quicksand.


To read more about the literature club please check out my other blog, here.
Posted by Travis Erwin at 3:35 PM

Oh, poor Travis... they smelt the discomfort on you like a dog smells fear. =)

Remember, don't mention anything you don't want to talk about because they will latch onto that like a burr to a stray cat.

How hilarious! Kids say the funniest stuff sometimes. You can't make up something better.
(Something tells me you were probably like them when you were young and now it's coming back to haunt you. :-))

I can feel you squirming from here!!! Absolutely brilliant!

LOL Too funny. That's kids for you!

Oh my. That is freaking hysterical!! Kids will often hone in on that one little thing you blurbed about...
Hahaha
Awesome. :)

I used to teach junior high kids, and that conversation sounds so familiar to me. I couldn't help but think, "This train has DE.RAILED."

Hang in there. And don't be surprised when one of them mentions serial killers out of the blue three months from now. :)

You're way more mature than I am, Travis.

I would've fallen over laughing at that one, and then given the kid a gold star for wit above and beyond her years... and then the parents would have me fired...

This made me laugh out loud, which I sorely needed this morning. Thanks, Travis.
E

OMG, I got tears in my eyes and just turned a little red from a coughing spasm, it was just that funny.

Personally, I like that little girls idea of a "cereal killer". I might give that one a crack sometime at a future date.

Dude, dude, dude. You stepped in it for sure then. Though I'm not sure it was quicksand.

Too funny.. gotta love when kids put you on the spot. It's rather surreal .. or a surreal killer.

What a funny story!! And yeah, when kids get stuck on a topic, they don't ever let up.

OMG that's a good one. They know when an adult doesn't want to talk about something and glom onto that like white on rice.

I hear they need a sub in the sex ed class. Interested?

Seriously, when I was teaching I asked the principal if we could make it mandatory for every parent to teach one full day of school each year. Talk about cutting down on complaining calls and such! Bet the kids would be better behaved too. :)

You are a brave woman. I was in a class with second graders today. Second graders are easily distracted when they ask uncomfortable questions!!!!

I bet the kids love you!

Oh my God, but they ate you alive! =D I think you handled it as best you could've, though, based on your summation.

This is a great site you have here. I just found it from a friend's page. I have a humor blog as well and I'd like to exchange links with you. This will spread some traffic around between us. Let me know if this is cool.

See? THIS is why I don't run storytime at our library.

This post brings back fond memories of "Kindergarten Cop," btw.

This brightened (or darkened) my day.

And you so know you are going to use this exchange in a book someday because it's too good not to! :-)

I can see it now, if it hasn't happened already...Travis is lynched by parents over 'serial killers'.

Children always pick up on things they're not supposed to. They have an inbred sense of radar.

Welcome to the world of teaching junior high...very challenging. I did it for years and now that's why I'm a writer...it made me crazy.
Mary

I'm just catching up on blogs and this one really made me smile. :)