Unless this is your first visit to this blog chances are you have heard me discuss Plundered Booty.

Plundered Booty started as a short story about a good ol' boy car salesman from Red Dirt, Oklahoma. A few of my writing friends read it and encouraged me to flesh out the characters and the plot and turn it into a novel. I did that very thing and I was proud of the effort, but I never could find a home for the novel so I shelved it and moved on to my next project.

Then one day I got an email from accomplished author Mark Terry.  Mark said he was putting together a collection of short crime stories and he asked if I'd like to join. He told me a few of the names he'd invited and I was flattered to be invited to join such fine, talented company. I'm not dummy so no way was I gonna turn down a golden opportunity like he was offering.

Then a little voice spoke to me. "Hey numb nuts! You don't write crime fiction."

I pushed that voice aside. Writing is writing I said and there was this story about a murder that I'd been contemplating. I started writing. Realized I didn't like the plot of the characters involved. That's when i panicked and it was laying in bed thinking how the hell am I gonna come up with a crime story and not embarrass myself or make mark regret his invite?

There in the dark of the night that little voice returned. "Hey numb nuts. I tried to tell you but you wouldn't listen. You write women's fiction and humor. Matter of fact the closest thing you ever wrote to a crime story was Plundered Booty."

This time I listened to the voice. At least to the last words of its little speech. Plundered Booty had crime in it. A couple of them as a matter of fact. And I'd written it as a modern day pirate story. Pirates were certainly criminals. And it was a damn good story, if i did say so myself.

But even the short story version was kind of long on word count I said. And at its heart it was a humor piece a bit shy on blood and violence. So I shot Mark an email. I explained what Plundered Booty was and wasn't. He told me humor was okay. He said his own story for the anthology was a lighter piece about a vertically challenged PI.

I'm proud to say Plundered Booty will soon be available as part the fine collection Mark has put together. Looks like it will be available via Kindle and nook right around March 1st. A trade paperback version will be out a month or so later. 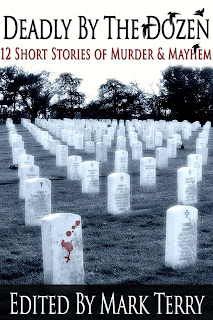 Good to read this post. Good to hear that you worked and whittled it to what it needed to be. Great job and congratulations on being part of the collection. Very cool.

Yea you!!! This looks fabulous and I can't wait to get a copy!

This is COMPLETELY awesome news, Travis!!

Congrats on once again becoming a published somebody.

How very exciting, Travis! Good for you. Giver yourself a pat-on-the-back! You have a gift.

Aloha from Honolulu
So SORRY I've been missing too long!

That's really an accomplishment to be proud of, Travis

Congrats! Happy for you!

I was hoping to see a video of clip of you dancing when I saw the title!

Hooray! I can't wait to read it!

(BTW, I realized just now that the problem I've been having isn't with Google Reader--it's the blog, itself. After my last comment I couldn't load anything again. Had to shut down the whole browser & start again. I don't know why this should be, all of a sudden...)