It Was The Best of Times, It Was The WOrst Of Times

Last week I had the pleasure of experiencing my 20th high school reunion. Caprock High -- Class of 1991.

It really is both strange, yet enjoyable to hang out with folks you mostly have not see in two decades. Some things change. Some do not.  Some turned out exactly how you imagined and others are shocking.

I can't say what people expected of me but they all seemed to be shocked by my size. You see for most of my school days I was of average size. Here is a shot of my 4th grade class. 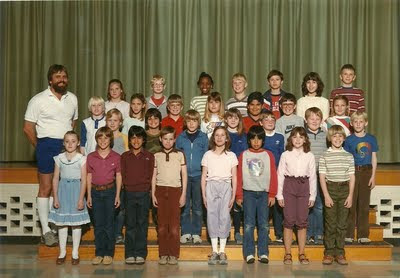 Can you pick me out?

3rd row from the bottom. Right hand side. Dorky kids in the gimongous glasses and Nike sweatshirt.

Directly behind my right shoulder is my best friend Mark. He was the ladies man of our class and always taller than most.

Here is a shot of our group last weekend. 21  folks in this picture from a class of nearly 300. A dismal turnout but we had fun so it was their loss. There were a few others who attended other functions or left before this shot. 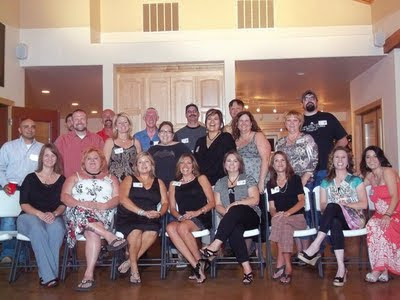 There are only four people that appear in both this and my 4th grade shot. I'll give a free copy of my E-Book Whispers to anyone who can correctly guess the two other than Mark and myself. I'm at the back over on the right hand side. Mark is immediately to my right. Despite our once being the best of friends, I have spoken to him exactly twice since graduation. First at our 10th and now at our 20th Reunion. And yet our conversation were never strained or awkward. We simply picked up chatting as if we'd gone to lunch yesterday. His wife shared a great story Mark's dad had told her about the first time Mark mentioned me in Kindergarten.

Mark went to his dad and asked if he could spend the night at my house. His dad said,  Son, I don't know these people and I can't just send you off to stay with people I don't know. "But Dad," Mark said. "Travis is one of my three favorite people in the world." "And who are the other two?" his dad asked. "Well," Mark said, "There's you, God, and Travis."

He got to spend the night and better than three decades later I'm proud to say we are still friends. Though I am fairly certain my ranks has slipped a few spots over the years given Mark is married with three boys of his own these days.

But truthfully, it was nice to see and talk with everyone, even the people I wasn't friends with in school. In one breath it felt like a lifetime ago since we were sitting in Government or History class and the next second it felt as if it all happened yesterday. Of course being a bullshitter of long standing I told a story or ten as I tend to do anytime I have a willing or at least captive audience. 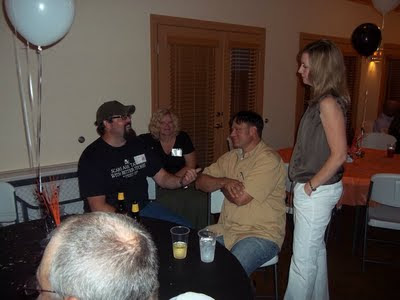 Here I am talking to Mark and his wife. Yes those are my Shiners on the table. One coworker worried after seeing this and several other shots on Facebook that people would get the wrong idea about me. As I told him, "I'm a writer, I have no kind of quality reputation to uphold. People expect us to be both liars and boozers. long as we are entertaining they are not disappointed by either facet of our being."

But you know what I like best about this picture? The look on my wife's face to the left of me. No doubt she
has heard whatever tale I was telling a dozen or more times and still she graces me with that gleaming smile rather than a roll of her eyes, or a shake of her head.
Posted by Travis Erwin at 11:11 AM

Regrets, I have a few. One being that I have missed this. Good post Trav.

Aw, what a sweet little anecdote from kindergarten! You're a kid, Travis! I am almost up to my 30th high school reunion! Eeek! How did that happen?

"You, God and Travis" -- hee, hee, hee! That would be a great title for a book or short story.

I don't have a nook or anything but is the answer Karyn Moore and Scott Thacker?

Better your 20th then 40th. Nobody is recognizable by now.

can I answer the question, cause I know the other ppl! lol! yes, Karyn is one, "I" happen to know the other! loved your comments on this Travis! I had to get a pic of you and Mark. Special to me cause when I go "home" to Ama. I see your house in my mom's neighborhood, great memories! And as we discussed, a great place to grow up! Love it, and I think would make a great title, "you, God and Travis!" Glad you and your wife came to the reunion! See ya'll in 5yrs!

Love that old pic, Travis. And thanks for sharing our thoughts on your reunion. I'm afraid I'm one of the ones that always stays away from school reunions.

Great stuff!! I must have missed your post about your "shiners"! Oh dear!! What a story though!

Glad to see your wife!!! I'll be absolutely awful and say she has the look of one who has perfected the "deep inside I am rolling my eyes and shaking my head" look! LOL!! Sorry, that was totally wicked of me!! I blame the lettuce! It's the devil you know!

Man travis you surely have a way with words!! Very happy for you!
Brian Shannon