After a busy weekend chocked full of pre-school soccer and flag football games I am now in Norman, Oklahoma for another round of postal training. I didn't get settled into my room until midnight and my class started bright and early at 7 AM. Let me tell you the combination of only six hours sleep, muscle relaxers and, a boring lecture makes for one drowsy blogger. While the instructor droned on I actually drifted into deep enough sleep to dream. At this rate, I'm bound to ace the test on Thursday.

I'm going to skip this week's edition of Tales of the Yellow Flag, but I'll have a new story next Sunday. Today you are getting another random thoughts post. 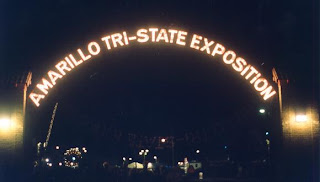 Friday the entire Erwin clan headed off the the Tri-State Fair and Rodeo. An annual event in Amarillo and like all fairs there were plenty of weird and strange people. I fit right in. Anyway we ran into an old friend, one that we knew had wandered down a drug filled and shady path. It was sad to see what this person has become, because they are no longer the person we once knew and cared for.

While at the fair here are the food items consumed by my family. Stiffed sopapilla, smoked potato smothered in barbecued beef, beans and cornbread, corndogs, deep fried eggplant, cotton candy, cheese on a stick, fried curly q's with cheese. We passed on the deep fried pickles and snickers bars.

"Hey I'm glad to see the two of you are still together." She said this as if it was a surprise and great shock. The comment came from an old friend who was one of my wife's bridesmaids. The comment seemed weird to me like maybe there was some kind of bet at our wedding as too how long we'd last. I know it is a miracle that anyone would put up with me that long but my wife is an extremely patient person.

My six year old's flag football team (The Mean Green) were not so mean and lost both games by a combined score of 91-21. But the kids had fun none the less.

My four year old's soccer team went 2-0 and since he is really my competitive child who hates to lose at anything this was a good thing. But he did tease his older brother about being a loser and he also renamed his brothers team The Green Beans. We had several fights over that one.

This post stinks and I have said nothing interesting, but this is what you get when I'm drowsy. And yes I now it is almost noon, but it feels more like five in the morning.
Posted by Travis Erwin at 10:59 AM

Email ThisBlogThis!Share to TwitterShare to FacebookShare to Pinterest
Labels: Friends, Me, The Family

Get some sleep. But, even without it, you are fun to read.

I'm shocked you passed up on the deep fried pickle.
Okay, I wouldn't be willing to eat one myself and didn't even know anyone would cook such a thing before, but hey, given the rest of the food line up, it was your only crack at a vegetable.
Maybe your doctor should prescribe a deep fried pickle a day.

i LOVE that you fell asleep! hahaha! that's awesome! you know, in the worst possible kind of employee kinda way.

I love these mind rambling posts. You never know what will impress people. Alex was impressed by the deep fried pickle.

I am impressed that you were surprised by the old bridesmaid's comment. In this day and age, nice to know that not being together never even crossed your mind or Jenn's.

If you want to perk up (or not) pop on over to women of mystery to see the cover of an about-to- be=released anthology containing a story of mine. (She said, proud as a peacock!)

no relatives and no fried rabbit?

Even sleep deprived, you made me laugh. Thanks. Hope you catch up on some rest. And if the final test doesn't go well, at least you may have dreamed a whole book. ;-) So really, it's productive in a way. LOL!

And I had to laugh at the bridesmaid's comment. Too funny!

I know the feeling. Going three weeks without a day off make Jack (aka Jason) a dull boy. *sigh*

I hear ya, mister! I went on a business trip a couple of years ago and had to sit through one particularly boring idiot drone on, for the better part of two hours, about something I don't think even he cared about. The only thing that stopped me from pointing two sharpened pencils towards my eyes and thrusting my head violently forward was the promise of prime rib and copious amounts of red wine at the banquet that night.

P.S. Bog roll is, in fact, toilet paper but what in the name of hell is a stiffed sopapilla? A Texas specialty, no doubt.

You have to admit that this part of your blog sounds as though you had a smoked potato with all of the following on it...But just a smoked potato? Sounds divine..

Go read my blog tonight. I pissed a few people off by writing it.
LOL..

And of course he passed on the deep fried pickle, Alex...A pickle used to be a vegetable.

Enjoy round two of boring-o-rama school.

I love state fair food!! All of it!! On Boiler Up With Phat's blog, he showed a video on how to make fried pepsi!! Looked really good.

"The Green Beans" IS kind of funny.

okay I never said I could type but that was supposed to read stuffed sopapilla, which is a fried mexican pastry filled with spicy taco meat.

I actually would have tried the fried pickle but between the smoked potato and curly q I'd already eaten about four pounds of spuds. Even a gut as ample as mine has its limits.

A "stiffed sopapilla" sounds better. Stick with the first version.

I would have tried the fried snickers myself...

I love the wandering posts when you're tired, too - a little something for everyone.

Ahhh your post was just fine. Get some much-needed rest and ace that test on Thursday.

now, what kind of state fair is this?...cuz we have nothig like that around here! That food sounds so good...minus the deep fried pickle and snickers of course.

the Green Beans...that's a good one!

I'm glad you're still together too....was there ever a doubt? ;)

Cicily beat me to it. :) I was going to tell you good job on resisting the insidiously disguised vegetable. :-O

If you thought that post was terrible, I shudder to think of how you feel about my entire blog...

By the way, that Mean Green logo is pretty sweet for a children's flag football team. I like it.