Last night I did something I rarely do. No, I did not eat any green leafy vegetables. I said something I RARELY do, not NEVER do.

I plopped down on the couch and watched TV. All night long. I didn't read, I didn't write, I didn't even ponder the comings and goings of the characters in my stories. I simply shut down my brain and watched the boob tube. And Network TV to boot. This morning, I am dumber for the experience.

Here is a rundown of what I saw.

A Muppet Christmas special called Letters to Santa. As a former Fraggle Rocker 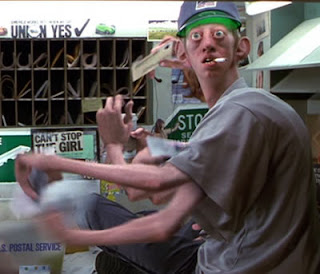 I can appreciate Jim Henson's creation, but this one lost me right from the get-go, when they opened with a big musical sing-a-long at the New York City Post Office. Trust me when I say, "Ain't nobody singing and dancing at the ol' PO this time of year." Or any other as far as that goes.

And another inaccuracy. There wasn't any glitter in the air. This time of year all of us that work on the equipment look as if we've just gotten back from a stripper convention in Vegas. That's right all that shiny glitter you attach to your Christmas cards ends up in the bottom of the PO's automated machinery and when I have to change a belt or whatever I come away looking like the love child of Tinker Bell and Sasquatch. So do all us Postal employees a favor and save the glitter for your kids school party, or you plan a Britney Spears impersonation for you next anniversary.

After the Muppets, we joined an in progress Christmas story about a little orphan girl, an elf, a polar bear, and a fox all looking for Santa's sack. Okay, maybe my mind us filthier that a reindeer turd, but couldn't the writer's have called it Santa's bag instead of sack. And did the fabric have to be flesh colored? And did the animals have to crawl out of said container and say, "Santa needs to do some housecleaning because that is one nasty sack?" Jay Leno narrated and Brad Garret and Norm McDonald both voiced characters in this poorly written kids story.

But wait, it wasn't just the shows that were bad. Let's talk about the commercials. Particularly the pharmaceutical ads. Is it really appropriate to advertise Cialis, an erectile dysfunction med, during a childrens show? Especially one about Santa's sack? And why do those people have not one, but two, bathtubs in their back yard? And I thought the whole point of taking Cialis was to share ye olde yuletime log. How can you do that from the comfort of you own backyard tub. Wouldn't they need to be in one tub together in order to jingle their bells. Am I alone in these thoughts? 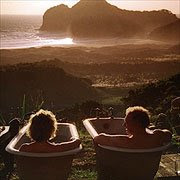 And then there was the one about the insomnia aid Ambien. No wonder that woman can't sleep she has a rooster roaming around freely inside her house. Instead of wasting her money on pills she should invest in some screens for her windows. Or maybe she's tossing and turning because she went to bed hungry. A big chicken dinner would probably solve all of her problems. Don't you think?


**The postal picture above is from Men in Black II and they had it right ... Most everybody who works at the post office is indeed an alien.
Posted by Travis Erwin at 9:00 AM

Email ThisBlogThis!Share to TwitterShare to FacebookShare to Pinterest
Labels: a strange world, I'm a Doofus, Rambling, Ranting, The sorry state of televison

Ha! You're full of information today. :) I'd never thought about the glitter before but that makes sense. I apologize if I ever sent a glitter card to Texas.

I've always thought it weird about the two bathtubs for both reasons you mentioned. That's just odd.

Oh dear Lord you are slaying me today.

"I come away looking like the love child of Tinker Bell and Sasquatch." HA!

And I've had the exact same thought about the Cialis bathtubs. Aside from what you pointed out (you can't get much action from within your own separate tubs) I wonder about the practicality of such a thing. Who in their right mind would haul not one, but two cast iron claw foot tubs into their back yard just to watch a sunset? Lawn chairs do the trick, and you can, er..., get busy on them without smacking your funny bone on the porcelain.

You should be working in television. :)

So funny! My kids were watching the muppet Christmas also. I do have to admit that I laugh whenever I see Beaker though. I love that muppet!

And yes commercials are so horrendous these days. And I don't have tivo. I really should get it but it's another expense that I can't justify these days.

That's all I can say.
I'm glad that you plopped down in front of the boob-tube, because it obviously inspired some comedic observational writing!

Glitter has the same half-life as pure plutonium. It sticks around and to everything in sight for something like 24,000 years.
The good news is that you'll still have it in your hair in June in case you have to go Las Vegas or something.

Ditto on the tubs - I think the same thing every time I see that commercial.

If you want to head-scratch yourself bald, just watch a cartoon channel for about an hour. Invitations for class-action lawsuits, debt consolidation offers, etc. It boggles the mind.

I can just picture how many outtakes there must have been with Norm MacDonald voicing-over a flesh-colored-sack-themed-show.

Kudos on working the words "Cock" and "Sack" into a single post title while remaining innocuous!

Should you wish to repeat your feat, may I suggest a lively discussion of the "Coxsackie Virus."

Too good to make up!

That is one nasty but very common bug... shudder... I laughed so hard my tea almost came out my nose!! this was a great post

It's a crime the trash they throw at kids to sell products. If they can make wonderful movies like WALL-E and others, why this sort of stuff for Christmas. Stick with A Christmas Story by the master Jean Shephard.

This line right here almost made me spit out my chocolate (and that would have been a sin!): And then there was the one about the insomnia aid Ambien. No wonder that woman can't sleep she has a rooster roaming around freely inside her house.

"...looking like the love child of Tinker Bell and Sasquatch."

omfg.. you should be banned from watching crappy TV, well maybe not cause you're too funny about it.. find Comedy Channel and check out Testees. I think YOU of all people will enjoy it.

I am going to be shaking my head and cracking up all day over this one.

I hate the pharmaceutical ads but I love your posting. You're so funny!

the glitter thing never occurred to me. That's pretty interesting. Sorry about that, but hey, I don't send Christmas cards.

I was getting ready to be pissed at you because Muppet Christmas Carol is almost my favorite movie ever (not least because I'm an uber-Jim Henson fan) but then I saw you were talking about the Christmas movie, and - well, yeah. The urge to roast your chestnuts subsided.

I'm scheming to see how many "if you know what I mean" holiday euphemisms I could put in one post - the "share ye olde yule log" was priceless.

I just finished reading this whole thing out loud to my husband...you are hysterical!

See? This is why I stick with the cable channels -- well, except when House is on ;)

Love child of Tinker Bell and Sasquatch? That might possibly be the funniest line I've ever read.

It is true; you never know what commercial will pop up!

Those bathtubs slay me....what nitwit came up with that idea?

As far as rants go, yours was by far the best I've read today!

How much do I love the visual of you covered in glitter? LOL

I'm a Glitter Babe. So sue me. I'm wearing it, too. You're having way too much fun -- thanks for taking us all along on the ride.

now you know why my tv stays OFF... until i wanna watch a dvd ;) lol

sticking with your theme: i guess there had to be at least one big COCK[erel] in the commercials, travis :O lol

Great post. And here I thought I was going to make it through the holidays without hearing about Santa's sack. I would love to listen in during the creative drawing-board stage of adverts for erectile dysfunction meds- talk about character sketch potential.

Oh and hey, thanks for visiting me on No Chickadees!

I just want you to know that it's never occurred to me to put glitter in with any card I've sent, ever.

Though a picture of you covered in glitter would really make my holiday season. Because I've always wondered about the love child of Tinkerbell and Sasquatch.

I just sent out all 50 of my Christmas cards...I added glitter just for the visual.

And, don't worry about my tongue licking all those envelopes. I used my tears from laughing so hard at this post.

i watched the tv show "Life" which I only watch because I have the hots for the lead actor..sigh*...lately I have done nothing but read read read..read 7 books last week...life is good

Travis, you should watch TV more often. I loved hearing your commentary on "the vast wasteland."

"Love child of sasquatch & tinkerbell"
"A rooster loose in her house"
You are one funny white man, Travis. I was struck by santa's 'nasty sack' even before reading your contagious snigger! In my book I wrote that a place dusted with glitter: "Looked like a drag queen had exploded back there or something." And what IS it with the two tubs?
It's obvious why you are such a popular blogger: writing talent, humanity (and the guts to share it) and HUMOUR . . . thank God for your humour. Don't go postal! ;-)
Aloha! LOL

I learned that I am not crazy to question the rooster and the tubs.

But, like Georgie B, I am stumped by Fraggle Rocker.

Thanks for making me laugh out loud.

you had me at glitter my sack lol

Sorta glad television isn't much of an option for me here. I do have it, mind you, but I only watch football games.

However, I almost long for the "bad" normal commercials. We get all the Armed Forces Network re-enlistment, don't go AWOL, loose lips sink ships, etc. sort of commercials.

Ha ha ha ha haha hah hahaha ah ah Travis you may have dumbed down your night but you woke up funnier than hell.

Also, I've always been bothered my those bathtubs...what is that all about? Really? Does it have anything to do with sexual performance...or do outdoor bathtubs do it for most guys & I'm just clueless?

Fraggle Rock was a Jim Henson Muppet show on HBO back when I was a kid.

Always liked the muppets. Good post, and your thoughts on programming suits me just fine. The more complaints I hear about TV programs and commercials the more I like the fact that I don't watch the tube most days.

Travis, write a letter to the government agency that handles advertisements to complain about the inappropriate ad during a children's program. That way someone will take notice and change the advertisements.

Well I have decided now that I will add glitter to everything cards, bills the lot, it would be worth it to see you all twinkled up!!!

I just wanted to add that in my part of England Fraggle rock is used as a derogatory term for a rough town!!!

*ROFL!* So true on the commercials!