I So Don't Do Mysteries - A 3 Ring Review

Time to once again do a book review. If you missed my explanation on my style of 3 book review you can find it here, where I reviewed the novel, One Mississippi. I plan to do this same style of review for every book I read this year. I'm off to a slow start, but here is book #2 for 2009, Barrie Summy's, I So Don't Do Mysteries. 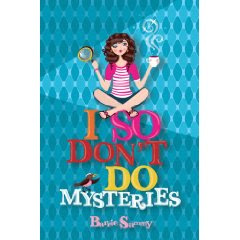 Most of you probably know Barrie as she is a fabulous blogger, a frequent commenter here, and a My Town Mondayer. Add talented author to that list.

I So Don't Do Mysteries by Barrie Summy

published in 2008 by Delacorte Press.

1) Sherry Baldwin, the first person protagonist of I So Don't Do Mysteries. Sherry is a great character with a great vice. It is impossible not to like her or root her on in all of her pursuits. But she does have enough flaws to make her real. Like any teenager her view is a bit warped and the parent in me wanted to ground her a time or two but a very believable and likable character.

2) The premise. I've never been a big paranormal fan but this book might change my mind. Sherry is contacted by the ghost of her mother and urged to solve a mystery. Along the way both Sherry and her mom uncover more than clues. Some of my favorite sections were when the two of them are dealing with things originally left unsaid.

3) San Diego. As I said, Barrie is a regular My Town Monday participant and many of her post have been about San Diego. Many of the places she's blogged about make appearances in I So Don't Do Mysteries and on a personal level that made me enjoy the book more. I enjoyed the little tidbits of knowledge I had thanks to her post that enhanced the facts she doles out in the book. It added to the package and made a good read all that much better.

1) You are a narrow-minded doofus. Okay that sounds harsh, but some will bypass this book because it is written for preteens. And even preteen boys might skip this one simply because it has a female protagonists. That is insane. A good story is a good story an if you are a preteen boy you might wanna read a few things like this to help you gain insight into the inner-workings of that girl you fancy's mind.

2) You hate to figure out the who dunnit until the last page. Okay I'll admit it I had 70% of the end pegged fairly early on, but that didn't detract from my enjoyment one iota. I am fairly astute at picking up clues and as a writer I look out for foreshadowing so this is not unusual for me.

3) Teenage angst grates on your nerve. This book captures it well and feels very realistic, but if you are annoyed by the fact that teenagers do not always prioritize well and tend to focus or worry about the wring thing then you won't like it when Sherry worries about the gravel in her aquarium matching the paint, or when complains about a blister on her foot instead of focusing on the case.

3 Lines beginning with the 3rd sentence on page 33 of the novel.

But that thought opens up a whole new future career path. I'll be a scientist that invents a pill that turns heartache into a brief bout of gas. You fart, and you're immediately better, immediately over being dumped.

Visit Barrie here, buy the book here, or at a book seller near you. You won't be disappointed.
Posted by Travis Erwin at 10:39 AM

Great review, Travis! I love Barrie. Still have to read this book, but it's on my list!

Love those lines from the book.

I like your reasons for NOT reading it better than the pros... that makes me want to read it even more.

Off to check out barries's blog now

Sounds like an interesting read thanks in part to your wonderful review Travis. Mrs. Shife is the book reader in the family so I will have to tell her about it. I only like reading those magazines with fancy pictures.

Travis, THANK YOU TO THE MILLIONTH DEGREE! I'm so glad you liked the book. And that's line 3 on page 33? Yikes. :)

I really liked your review. It made me want to read the book!

HOLY BEJEEZUL! That one quote did more for me than the whole review. I'm hooked. I going to get it just as soon as I can.

You beat me to the punch. I have a review of this coming up in the next couple of weeks. My wife is reading it and says it's a page turner.

Great review, I love the line from the book. I enjoy Barrie's blog, now I have to find the book.

I love that sample sentences. Wow. I'm looking forward to this one.

A brilliant review! I loved this book and agree with you completely.

Travis: I Like that review format! Sounds like a cool book. Even better, it's by a webPal of ours! Well done. aloha-

Great quote - where can I get one of those pills??? haha!

I agree with your point in reason #1 others may not like a book. Good writing is good writing.

But like many, I am sometimes guilty of passing up a book because of premise or character. It keeps me from broadening my experience of more good writing.

I love reason number one why you may NOT like the book...lol.

Sounds like a great introduction into the YA world. People should try reading in all genres; it might help their own writing. Don't know about anyone else, but I'll use all the help I can.

Somehow I don't think you had your heart in reasons not to read it. So we all will read it.

Congrats to Barrie on her book and I'm excited to get some extra cashola so I can purchase it and read it. :D I love pre - teen books. Some of the kid's books out there are better reads than adult books!

Great review Travis! And it is a fabulous book! Oldest has just finished it and is getting ready to post up her review and interview later this week! And I have to say, she adored the book!

Ha! I love the line!