Isn't there a saying that says something like, The road to hell is paved with good intentions.

My plans to finish Booty and be submitting by Easter have taken a serious blow. The first few days went well. Like excrement from a dysinteric goose, two entire chapters flew from my mind. Then a blockage occurred and the flow stifled off. Yesterday morning while I was staring at the dreaded blinking cursor the worst possible thing happened. My electricity flickered, the computer shut off, and refused to come back up. Given the error message that appears, I fear my hard drive is toast.

I lost no more than a paragraph since any time I'm working I use a thumb drive and I save religiously, but I am worried about pictures and others things that I may or may not be able to retrieve. The computer was on a surge protector but it is also six or seven years old. I have a laptop which I am now using but typing on it is tedious even when using a larger keyboard. The only good news is that the word are now flowing again, though I have resorted to writing longhand. Just me, the pen and paper. That is how I uses to write all of my first drafts and it seems as if for now I back to that style.

Last night I finally talked my wife into going and seeing Atonement at the theater. 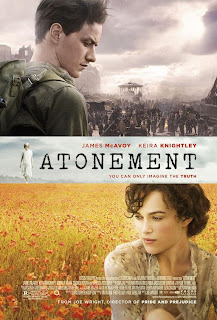 I give the movie an 8, but only because I read the novel. Had I not read Ian McEwan's masterful novel I would lower my score a point or so. The acting was good but as is the case with most movies, the characters just were not as developed as in the book, and without the stellar prose to accompany it the story felt a bit slow. My wife did not like it much at all but then agian there were no dragons, pixies,or magical beasts. Also she does not deal well with tension, or plots that delve into the morally corrupt side of humanity.

The movie did stay in line with the novel. Only the ending was markedly different and actually he result was pretty much the same but the presentation of the end was different. Much more direct and forceful than the book. I prefer the novel ending that left a bit more to interpretation, but I guess Hollywood thinks the average movie goer is too dense to think on their own.

My recommendation. Read the book, then see the movie if you have a chance, but to only see the movie is doing yourself an injustice.
Posted by Travis Erwin at 4:54 PM

Email ThisBlogThis!Share to TwitterShare to FacebookShare to Pinterest
Labels: Me, Movies, The Family

a lot of computer blow ups going around these days. There was also one at women of mystery and my own a couple of days back

When your hard drive dies, do you flush it down the toilet, bury it in the back yard or use it as a disk, aimed at skipping from one car roof to another in the Big Box parking lot, like a flat stone skipping across the water?

I'm glad to hear that the electrical jolt didn't kill the thumb drive, too. It was plugged into the computer yet didn't get zapped even though the hard drive did? That's very reassuring!

AW: My computer guy can retrieve stuff from hard drives.

After two wicked viruses and two lightning strikes at my old house that fried my computer - twice(whoever said it doesn't strike twice is an idiot, or at least don't live in FL), I learned my lesson the hard way.

If one dies, or either goes in the shop, no disruption - it's much more about losing momentum and time on my master's thesis that I fear than not working on the WIP. I've got a hard deadline on the MT if I'm to graduate on time. No body's breaking down my door wanting my WIP.

But hey, it never fails - just when you commit yourself to finishing - something goes wrong. With my first novel, when I was in the home stretch and determined to finish before my 40th birthday, I had a plumbing leak and had to have my whole house re-plumbed.

Determined to finish, I put off the major repair job and turned the main line to the water in my house off every single time I went out or went to bed so as to not risk having a flood.

It sure was satifying when I finished, but nerve wracking wondering if those pipes would burst before I did.

Atonement is an awesome book. I have haven't seen the movie yet because I'm fearful of being disappointed.

On the computer: take it to your local repair guy. When this happened to me, they were able to get me all my stuff. I can't tell you what they did, but it had to do with the "motherboard", which is code for "buy a new computer, dude".

Sorry to hear about your computer. Hope you are able to retrieve all the pics. I've gotten quite used to typing on a laptop, although the internal mouse is a problem. but I don't have large fingers.

Gads...my sympathies on the crash! Not even a blue screen error or two to warn of an impending end? How unkind! We see, yet again, that computer is a blessing AND a curse. <:( *hug* Poor little "cuddle monster."

Travis, I have some of your files stored on my computer if you ever need them. Just let me know...

That sucks. And I refuse to go see the movie. I liked the book WAY too much to butcher my idea of who is playing the characters.

eeho, hope it's not the hard drive...

Travis, you and I are on the same self-discipline time-line.
Now I'm paranoid, though my computer's only a couple of years old.

I decided against a funeral for my old hard drive. Instead, it sits next to me on the counter, sort of like a stuffed animal without the fur...it's beginning to haunt me like Edgar Allan Poe's Raven. Should I worry?

I LOLed at the dysenteric goose analogy.

I loved the book Atonement so much that I have been reluctant to see the movie... That book haunted me for a while and sent me into an Ian McEwan marathon reading session for a while. Atonement is my favorite, but Saturday was very good too, in a totally different way.

Atonement is on my list of TBR books since I got it for Christmas. I'm planning to read it before I watch the movie, though. :-)

Travis, I am so sorry about your computer. I live in ignorant bliss, expecting that nothing will happen, but since, as Alex points out, everyone around me is having problems, I will start backing up my work and preparing for the worst.

Thanks for the heads up re: Atonement. I had it on my list as one to see before I leave Florida in early March. I'll just look for the book instead.

Good luck on getting back to Booty sooner rather than later.

Hmmmm....I doubt I will read that book but I may see the movie. Too many books to read right now!

THat really sucks that the book is at a difficult point right now. Don't give up! It will hit you soon and you will be right back at it.

Haven't read Atonement but will have to put it on my "must read" list.

As far as movies with open endings, did you see No Country for Old Men? The general public doesn't like the ending - it makes you think for yourself. I found it refreshing in true Coen Brothers fashion. Excellent. And now I have to go read the book, too!