Times are hard for lots of folks right now. Yet they were harder still for those trying to get along back in the 30's. However, for one Texas Panhandle boom town, the Great Depression was of little consequence .

Gushing with money from the oil and gas reserves below ground, Pampa, Texas barely noticed the bust. The same cannot be said about the dust. 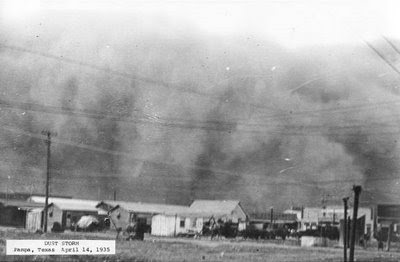 Wind erosion and drought decimated the southern plains and deepened the depression in those areas that relied solely on agriculture to get by, but boom towns like Pampa thrived and swelled as hungry, desperate people poured in from surrounding states.

One such person was a fellow named Charles who was forced to leave his family behind in the town of Okemah, Oklahoma. Charles eventually settled in Pampa and sent for his family, including his oldest son Woodrow who was named after President Woodrow Wilson.

Woodrow was a young man of 19 when he arrived in Pampa, Texas, but despite his dad's efforts, his heart wasn't in oil field work. He preferred to while away his time with a harmonica, but did manage to save enough money doing the occasional job to eventually buy a guitar.

Woodrow fell in love with a girl named Mary, the younger sister of a fellow musician and in 1933 they were married. Along with his brother-in-law and another man, Woodrow formed a musical group called The Corncob Trio. Later they added more members and changed their name to the Pampa Junior Chamber of Commerce Band.

But as the depression worsened and the the dust storms became more frequent, Woodrow struggled to support his growing family. 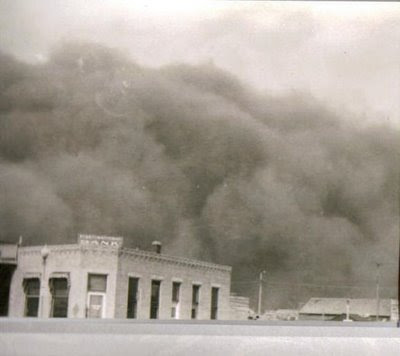 In 1937, he took to the road. Like his dad a few years earlier, Woodrow was forced to leave behind his wife and kids. They stayed in Pampa.

Traveling along Route 66 with other dust bowl refugees, Woodrow took whatever odd jobs he could find. He hitchhiked, hopped freight trains and walked until he reached California. Never without his guitar, he often played and wrote songs in saloons and in appreciation for a place to sleep at night.

In California, he faced anger and scorn from those who opposed the influx of "Okie" outsiders, but eventually he landed a job playing old time traditional songs at a Los Angeles radio station. Woodrow was an instant hit among the thousands of dust bowl refugees living in cardboard cities as the sound of his voice reminded them of home.

As his audience grew, he began to intersperse political commentary into his program. Soon his criticism of corrupt politicians and business men began to come out his his songs. As did his passionate support of the union organizers for migrant farm workers and other humanist principles.

But Woodrow wasn't the type to hang out in one place. He was the kind of man that had to keep moving so he decided to try his luck in New York City. He arrived in the Big Apple in 1940 and that same year John Steinbeck won the Pulitzer for The Grapes of Wrath. Here was Woodrow, the spitting image of a Steinbeck character in real life. Woodrow was quickly embraced for his musical authenticity, especially by those in the leftist movement. His popularity grew and finally he had the financial means to send for his family who were still living back in the Texas Panhandle town of Pampa, Texas.

It was also during this time that Woodrow, better known as Woody Guthrie, wrote his most famous song ...

There is much more to Woody's life than I am able to include in this post, but I wanted to highlight Woody's connection to the Texas Panhandle and how his early life shaped the creation of that song that every American has sung at one point or another, and was sung by Pete Seeger and Bruce Springsteen at Barack Obama's recent inauguration.

Knowing the history of his life, I can almost picture him plodding along dusty Route 66. A guitar is slung over his back, his thumb is in the air, the soles of his shoes are tattered and flapping to the steady rhythm of his stride ... and deep in his brain, the words of this land are taking seed.

Please check back for more My Town Monday links

Very interesting. I remember watching a special on The Weather Channel about that dust bowl. The strangest part was the thriving of the jackrabbits and the killing of thousands.

Awesome post. I kept trying to figure out who he was as I was readng with no luck. Well written.

ugh...when i see pics of the dust storms, i thank god he saw fit to exclude me from those days. he put me in texas after air conditioning and filters were common...

This was SO interesting -- I too didn't have a clue who you wrote about -- but that song has been one of my favorites ever since my fifth grade chorus sang it way back in the mid 1960's. Something about it kind of fills me up, and it comes to mind every time I go on a road trip and see that ribbon of highway.

Thanks for sharing the history behind the song.

I knew who it was, but I didn't know the facts of his life. He is still a folk music legend.

Glad you got a new house under contract, Travis.

That's a beautiful post, Travis. I enjoyed it a lot.

Linda, who _may_ have a MTM post late today or tomorrow.

It is interesting that we both wrote about this time period, Travis. I think that folks can relate to those days these days...

Fascinating stuff. I had no idea that's who Woody Guthrie was.

This seems a little too relevant. I have one tonight.

You had me, Travis. I didn't recognize Woody as Woodrow! Clever piece. He is a favourite of mine! My post is up: MTM: Gravenhurst.

My post, sort of on robbery and Hong Kong castles, is up here:

Great post and photos and Woody's music is still so poignant.

Now I know. The depression was bad in Canada too, but my mother who lived on a farm, said they always had something to eat while others often went hungry.

My MTM post will be up in the morning as I'm still deciding which of the 49 photos needs to go in.

His son, Arlo, looked very much like Woody as a young man. Interesting fact that Woody was not a particularly great vocalist. In fact, he was a little monotone.
Arlo was a better singer than his dad.
If this link works, it will take you to a duet with Arlo and Emmy Lou Harris. http://www.dailymotion.com/video/x13sel_arlo-guthrie-emmylou-harris-deporte_events

As soon as you mentioned guitar, I guessed Guthrie, but, it really was a guess. I had no idea he was that old, or from Texas. Great post, scary wonderful photos.

Mine is up and now is really boring.

A good thing, for America, he didn't like oil field work.

Hi Travis, I had no idea that dust storms were so destructive (sounds a bit daft to say that now) But as someone said on my post, the old days ain't all they are cracked up to be!!

Wow--I will definitely have to come back to read this.

One of the most depressing books I ever read was a children's book called "Out of hte Dust." *shivers* It was maudlin.

Anyway, there's a shout out for you on the Book Roast.
:-)

Fabulous post Travis, I like the evocative way you write, gives us readers a real sense of time and place, mine is kinda minimalist in contrast, but hopefully others will enjoy reading of the land down under :)

Great post...I've seen his son, Arlo play live many times & it always makes me feel like I lived through the peace love times of the 60's.

What I love most about his shows...besides all the great music is that there's always a charitable aspect to the show...always.

Cool Post. Unpleasantness is up at Women of Mystery from my home town in Larchmont.

Interesting. I love that song. Nice to have some background on it.

Wonderful post. I didn't make the connection until the you revealed Woodrow. I love connecting people with their history.

My MTM post it us, a penmanship lesson in Kingston.

Kern says he drank a beer in the tavern underneath the apartment where Woody Guthrie lived in Oklahoma. A fine tribute, I think.

My post isn't an official My Town--it's about 5 Things I did this Weekend. (In Fort Worth. Does that count?)

Glad to catch up with you via the blogosphere, and my prayers in house hunting.

Hi travis. I did a post about the possible new Hartlepool mayor.

I grew up after the dust bowl but even as a youngster I can remember seeing the sky all reddish hazed from dust blown in from farming country well away from us.

Always learn something interesting when I stop by here Travis. Thanks for that and hope all is going well for you and the family.

Beleive it or not I grew up in Pampa. My 5 year old daughter's music class recenlty did a unit on Woody and she bops around singing his tunes. It's cute! I enjoyed this

I didn't know about his Pampa connection. Thanks for this, Travis. It was lovely.

I'd like to try a MTM but I grew up in so many different towns I wouldn't know which to pick.

superb post dude, I wish I had half the mind you do.

Thanks for giving a little more background on such a fascinating individual.

That is a great story Travis. (and it still amazes me how well you write). Woodrow sounds like an amazing man and all his efforts really did pay off. Unfortunately I can't see (or hear) the video because my work computer won't allow me, but I'll definitely look at this again when I get home.

Thanks for sharing this great American story.

Holy Crap! He wrote "This land is your land?" Now I am impressed.

Fantastic post that should be more widely published!
Sorry I've been too swamped to put up a specifically "My town" post this week, Travis. Aloha-

That was awesome! I loved reading it!

Hi Travis, well better late than never. I finally posted my MTM. And it's still Monday where I live.

Travis,
What a wonderful post. I had no idea who you were leading up to. You really painted the picture of how one man's persistence and belief in his gift paid off.