So it's no secret I wrote this novel ... a women's fiction novel to be exact.

The e-book came out in May and has gotten great reviews. I like that I've heard from quite a few people telling me how much I/the book surprised them. Then true to its name TWISTED ROADS veered from the straight and narrow. the print edition got lost in a loop somewhere between my publisher, the printer, and the distributor.

One delay led to another. Release days got pushed back. One date after another came and went. My blog tour fell apart. The podcasts and radio interview I had set up slipped away. My release party and bar room reading flat-lined.

Now I'm trying to put things back together, but finding it harder to regather the troops than it was to rally them in the first place. The print is available for order now at Amazon and other fine book retailers. Though the cover art and reviews for the e-book have not meshed with the print just yet. Hopefully soon. Anyway I want to thank those who have read the book, reviews it, and told your friends to do the same. We writers need people like you. I'm lucky to have y'all. 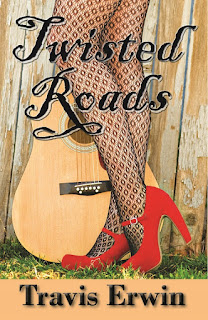 What Do You thINK?

I have no tattoos. Perhaps one day I will. Maybe if I even have a book take off and land on NYT bestseller list I'll get some celebratory ink, but thus far I simply have not been compelled to have anything etched upon my skin.

I have no issue with those who do. But recently I have had two vastly different discussion about tattoos.

The other day I was at Whataburger about to throw down a tasty bacon cheeseburger. I noticed the girl taking my order had numerous band aids and ace bandage wraps on her face hands and arms. The one on her face was at her eyebrow and obviously covered a piercing. So then I noticed the edge of a tat extending beyond the cover on her hand.

Okay I'm a pretty devout meat man so I don;t care what her piercings or ink looked like nothing was going to put me off my feed and make me say, "Nevermind Whataburge, I'll forgo your tasty burger and go have a crappy Micky D's from around the corner."

Well maybe if her tattoo read EAT MORE LETTUCE but what kind of crazy person would get that?

So I ask. What do y'all think is worse. Having a fast food worker with piercings and ink or position one at he counter covered in bandages that make her look like she jsut got out of the leprosy ward?

I friend of mine who attends the same church I do was telling me about a guy who sits in front of his family every week at mass. On the guys arm is lots of ink including the words FUCK OFF in big bold script.

My friend has three sons the oldest of which is 12.

My friend was and is offended that this man would not try to cover up the tattoo in anyway with a long sleeve shirt or such. Now I should point out my friend was not judgmental. He made it a point to say he was glad Mr. Fuck Off came to mass every week and that he came with his own family and that the man had obviously lived a colorful maybe even troubled life at some point because much of his ink looked like prison tats. So my friend said he believed this guy had turned a corner in life, but he found the words on his arm offensive on behalf of both his wife and kids but also on behalf of the church body.

My friend was seeking advice. Asking if we thought he should befriend this man and then at some point when they were comfortable with each other broach the subject of his f-bomb arm.

Everyone in the group thought that was a good idea.

I had no problem with my buddy befriending the man but not with the words on his arm as the primary motivation.

I said the words on his arm were just that. Words. The only power they have is what those who read them give them.

But what about the innocent kids? Came the shouts. They shouldn't be exposed to that.

Kids are gonna hear F Bombs in this day and age. They are going to be exposed. I say use this man and his arm as an example of how long a bad decision can stay with you. I say don't make the words FUCK OFF to be some magical rebellious taboo for his kids or any others.

And maybe this guy needs this reminder of his past life. Of the choices he's made. Maybe He looks down at those words while listening to the priest and needs that stark comparison of the then and now. And isn't a church supposed to be God's house? Isn't God supposed to be all seeing? So covering it for God's sake is asinine. And that tattoo is part of who that man is even if it is a more direct reflection of who he was. As parishioners and God's children why should we expect him to hide more from our eyes that what God can see?

No, I see the tattoo as mere words. Words that testify to the man's journey. Ia m not offended but inspired that he is sitting there in church.

Thoughts?
Posted by Travis Erwin at 9:04 AM 9 comments: