Blogging is like exercising. The longer you go without doing it the harder it is to get back in the groove.

But I've decided to challenge myself and post a new blog every single day in August. Can I do it? Hell if I know, but I'm gonna try and this spot is sort of my cleansing, info dump of all the things I've meant to blog in recent weeks but simply have not made the time to do so.

I recently took a trip to Oklahoma City and while I plan to share a few of those sights and experiences let me say that was I not a dedicated and faithful husband and father I could very well be writing this update from the Czech Republic.

You see the World Cup of softball was going on in Oklahoma wile we were there and many of the countries were staying at our hotel. The Czech girls, one in particular were strikingly beautiful and that accent, well had she asked I just might have defected.

The Japanese girls were staying on my floor and it's no wonder the USA women beat them in the final because those Japanese players stayed up half the night making all kinds of damn noise.

My 20th class reunion is this weekend. Last night I partook in the pre-party mixer and had a blast. Several of my former classmates commented that they regularly read this blog as well as anything else I have out and available, but the highlight was when my old buddy Marcos Martinez (see I told you I'd give you kudos) walked up and handed me a beer. Not any beer I might add but an ice cold Shiner Bock. Marcos, who I hadn't seen or spoken to in 20 years said, "Here man, I bought this Shiner for you because I know its your favorite from always reading your blog and Facebook posts."

I recently finished reading blog pal Charles Gramlich's western story collection Killing Trail on my nook. Like Charles I cut my reading teeth on Louis L'Amour and along with the great original short stories Charles included a fine essay about Mr. L'Amour and his influence. If you have an e-reader and love a good western I highly recommend you purchase Killing Trail.


You know how clerks at the store use that felt marker to check you money. A yellow mark is supposed to mean it's legit and a black mark means it's fake? Well, I got to wondering where those marks go? I mean I never get a fifty that has dozens of yellow marks on it, so I did a google search and while I never discovered the answer to my original question I did find out those pens are nearly worthless.

The pens check for starch in the paper and given that money is made mostly of cotton it has none so a bogus bill made from starchy paper will turn the ink of the pen black. But most counterfeiters these days take small denomination bills and bleach them and then print a larger denomination so the pen will show it as a legit bill even though it is not. Also any paper even a plain sheet of computer paper will show as legit according to the pen if you first spray it with hairspray. And real money will show as fake if you use spray starch in it so I guess the moral of this story is keep your cash away from your ironing.

I am sick of summer. It's been miserable hot and dry here this year. Right at 2 inches of rain since January 1st. The lakes are drying up making fishing bad, the electric and water bills are soaring, now that Game of Thrones and Treme are over there isn't a damn thing worth watching on TV.

So Fall needs to hurry the hell up. I'm excited about football. My beloved Huskers are in a new conference ready to show Phats and the Big 10 boys what real competition is all about, The Saints very well could be better than their Super Bowl season, and since I wrote something close to a jillion High School profiles for Top O' Texas football magazine I even pumped for some real Friday Night Lights action. And Boardwalk Empire. 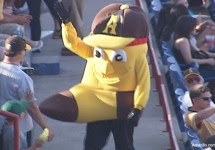 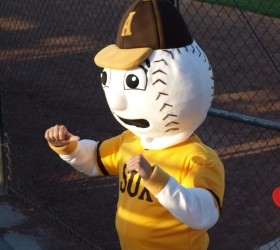 Don't get excited by that title. Okay so most, if not all, of you probably shuddered more than tingled at the mental imagery of the title. Nevertheless this blog is not a peak into my bedroom. Instead, it is a peak at a friend of mine. And trust me, she is a hell of a lot prettier than me so the view is much better.
I have long been a fan of Betsy Dornbusch's blog which has one of the best titles in all of the blogosphere ... Sex Scenes at Starbucks.
In honor of the release of her new, erotica Sci-Fi romance LOST PRINCE, SALT ROAD SAGA Book 1 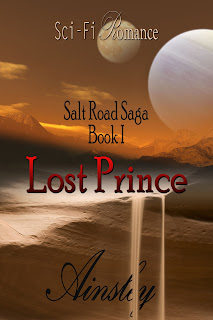 Yes, Ainsley is Betsy's pseudonym, but don't tell anyone ... it's a secret.
Ownership of Art

Betsy Dornbusch
Even before the moment of conception, ownership of art shifts. Ideas aren’t single entities but a amalgamation of concepts stimulated by the world around us. Or, in smaller words for the short bus types: There ain’t nothing new under the sun. Art can’t happen in a vacuum. The moment an idea forms it’s already belonged to other people, rather in the manner a Long Island Iced Tea is the sum total of its parts, except more, oh so much more. Anyway, the point is, get over yourself already. Your idea is not your own. It never was and it never will be.
I spend a lot of time at thinking and trying for Original. (True story: my eye doc told me to stare out the window often to keep me from getting eye strain. I was all, “Dude. I’m a writer. That’s what I do.”) Maybe some writers just barf their brilliance onto the page; not so much me. It often feels like Day One of Genesis. (When does “and on the seventh day she rested” come in, huh? I know very few writers who take a day off, like, ever.) But what we’re actually doing is making connections between all the disparaging bits of things we know and think we know and the requisite Wikipedia misinformation.
But it’s so solitary to sit and stare that the influences of the past isn’t always obvious. So we think this ugly baby is ours and ours alone. I liken it to that point in the evening where you’ve hit your stride with drinks and you walk to the bathroom and people are looking at you and you’re thinking “Dude, I’m all catwalk.” But you’re actually just staggering drunk. At this stage we really have no idea what we’re doing or what led us to this point.
Then reality sets in. We make the transition of putting our words out there in front of people. It’s worth noting that this stage is a spike in sharing; here, we’re actually asking people to influence our work. Hey. We’re writers. Nobody every said we were smart. Or sane. Or sober. So for the love of God let these readers be a decent beta or a critique group.
And then the editor takes it. We might not be asking, but we’re going to get more influence anyway, whether we like it or not. I pray you get a good one.
And then, finally, readership. Hopefully the sort that pays rather than pirates. (Don’t pirate, people. You’re not as cute as Jack Sparrow, I promise.)
And here’s where the sharing really comes into play, because all along, while you thought this thing was yours, you’ve had to make room for the reader. They are going to drip your story through their own crusty coffee filter. Nothing you can do about it. Just make sure you don’t overfill the water tank.
*eye color figures somewhat prominently in LOST PRINCE. I kind of did it as a joke. There, trivia you know that no one else does.
Visit Sex Scenes at Starbucks to find out more about LOST PRINCE, read an excerpt, and learn about the author. http://betsydornbusch.com
Buy the book at Whiskey Creek Press
The only thing that’s kept Alaric, the so-called Lost Prince of Calixte, from giving into his grief over his beloved homeworld is the thought of revenge against the man who betrayed his people. But he couldn’t be more wrong about Haydn, who actually saved two thousand Calixten soldiers from certain death and secreted them on an inhospitable planet. There, they’ve launched a fledgling rebellion against the Coalition that rules six galaxies, including the lucrative Salt Road. They only need their prince to lead them.
Alaric needs a pilot to get him to his soldiers, someone too desperate to betray him. Katriel, a hotshot deserter pilot enslaved to Haydn by debt, is perfect for the job. But neither Katriel nor Alaric realize how the battle over Calixte binds them closer than blood, and when they find out, their collision will send shockwaves through the universe.
Posted by Travis Erwin at 3:32 PM 12 comments: