Chances are the name Clarence Hailey Long, Jr. does not mean a thing to you. He went by the initials C.H. but I doubt that rings a bell either. So who was he? Only the inspiration behind one of the most iconic figures of the last century.

But before we get there let me give you a bit more background on Mr. Long. He was born in 1910 in the small town of Paducah, which is located at the southern edge of the Texas Panhandle. During World War II he served with the United States Navy in the South Pacific. Upon his return to the states, C.H. went to work non the massive JA Ranch just south of Amarillo. The JA was founded by John George Adair and Charles Goodnight. I have talked about those men before in a My Town Monday post.

In 1949 Long was foreman of the ranch when LIFE magazine photographer Leonard McComb visited the ranch to take pictures for a series on ranching in the American west.


Thirty-nine year-old, 150-pound Long became the primary subject of those photographs. He was described as "a silent man, unassuming and shy, to the point of bashfulness [with a] face sunburned to the color of saddle leather [with cowpuncher's] wrinkles radiating from pale blue eyes."

Those pictures caught the attention of an ad executive named Leo Burnett who was desperately trying to spin his clients product in a new direction. In 1954, using the rugged face of Texan Panhandle cowboy Clarence Hailey Long, Jr as their poster boy, Marlboro cigarettes shed their "Mild as May" slogan in favor of the handsome Marlboro Man. until then they'd been regarded as a feminine cigarette. The campaign was an immediate success and for the next 45 years a variety of men portrayed the Marlboro Man.

Long's Marlboro photographs led to marriage proposals from across the nation, but he rejected them all. Instead he wed Ellen Theresa Rogers, a nurse from back East that had been hired to care for young Cornelia Wadsworth "Ninia" Ritchie, daughter of ranch manager Montgomery Harrison Wadsworth "Montie" Ritchie. The Longs had five sons: Clarence, Roger, Walt, Grant, and John and remained married until his death in 1978. No he did not die of lung cancer as some report. Though a later Marlboro Man model did die from the disease.

Mr. long was a devout Baptist and true to his faith he repeatedly rejected an offer from a beer company that would have paid him more than $20,ooo grand a year. A lot of money for a cowboy in the fifties.

Long is quoted as once saying, "If it weren’t for a good horse, a woman would be the sweetest thing in the world." 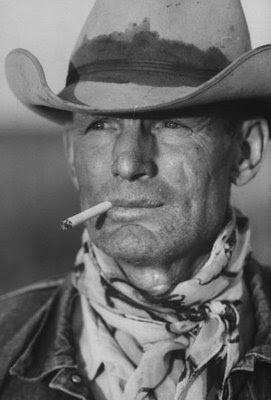 One can point out the ill-effects of smoking and pontificate the damage caused by Phillip Morris's successful campaign. Maybe you can even make a case that many boys and men started smoking because they wanted to be like the Marlboro man, but I don't think you can argue that Clarence Hailey Long, Jr. was anything but a man of the west, a cowboy who preferred the Hereford cattle he was in charge of to the fame and notoriety his image produced. He was what his image portrayed him to be ... a man's man.

(I'm uncertain if that first picture is of C.H. Long or a later model, and the second photograph is from LIFE magazine in 1960 when they did a follow up story on Mr. Long. Sadly i could not find any images from the original LIFE series.)

Check back for links from other My Town Monday participants, but due to the Super Bowl I may be slower than normal updating the links.

Lyzzydee takes us for a sleigh ride in Welwyn Garden City, England.
Wendy lets us stroll along as she takes a walk around her New York City neighborhood.
Debra lays it from Village of Peninsula, Ohio.
Chris takes a broad approach and salutes a world ambassador.
Jenn Jilks explores the eco-friendly Balls Falls this week.
Clair Dickson introduces is to Livingston County, Michigan's Woody the Woodchuck.
Barbara Martin fires off a post about the Long Branch are near Toronto, Canada.
Barrie Summy serves up a tasty post from her Southern California area.
Reb discusses the fine people of Edmonton, Alberta, Canada.
Kyles heads down the highway between Sydney and Brisbane, Australia.
Mary takes a nostalgic look at bygone train trips across the west from Olmsted Falls, Ohio to Oregon.
Clare2E is bucking and tumbling from Atlanta, Georgia.
Patti Abbott takes us to the Detroit Historical Museum.
J Winter sprays us with a knowledge of his town, Cincinnati, Ohio.
Paul Brazill monkeys around with a post from Hartlepool, England
Passage of a Woman is singing from her winter wonderland in Kingston, Tennessee
Posted by Travis Erwin at 12:02 AM

That was a world famous advert!!!
I have got ahead of the game (not the super bowl mind you) and have my post up early!!!!

I love the "if it weren't for a horse" quote. Classic!

I remember the Marlboro Man ads from when I was a kid, but I never knew who he was or anything about him. I guess I'm not surprised that the love of his life was his horse.

That first picture certainly looks like a younger version of the man in the second. Same mouth, same nose, same cheekbones.

I love the fact that he wouldn't advertise alcohol for any price, and wasn't swayed by the marriage proposals. Obviously, this fellow had both integrity and good sense.

Very interesting background. Sometimes we forget that these "icons" are just people with lives off of the billboard and other ads

My post is up, Travis. I'll be back to read.

That was a great post, Travis. Had to laugh at the "if it weren't for a horse..." quote. My husband joked after my extensive dental work "Wish I'd followed the advice to check out a woman's teeth like you would a horse before gettin' married." LOL!!! I've found that tuna spinach casserole fixes a man's attitude pretty darn fast.

Travis, a laptop is the way to watch a game. When the inane sports caster throw obscure, or wrong facts, you cn check them right away!

Have you ever thought about assigning a particular aspect of a town for MTM? Just a random thought...
It would be interesting to compare, for example, buildings, clocks, towers...

Mine will be up at 11p tonight. Glad to see you back to hosting.

Cool post, Travis. Of course they had to start with the real cowboy for their ad campaign. And it's interesting how that image (Marlboro Man and other incarnations) is still so fascinating.

*lol* I like his quote about horses and women. :-)

This is me, NOT commenting on your blog too!

Wonderful and nicely educational post, Travis, on one of my favourite topics. Not cigarettes: cowboys.

Any true cowboy would put his horse before a woman any day of the week.

Very interesting. I bet he had no idea he'd become an icon when he signed up for the Marlboro gig. ;) My MTM post is up. It's all about California and the boysenberry!

All of life's images can be found at images.google.com

I remember him well. He was one bad boy for my generation.
I'll have one tomorrow.

Ahh, a sweet tribute to the man behind the Marlboro.

In my state we recently had a Marboro Man poster boy: it was the picture that captured the war, a young soldier over in Iraq, face smudged, haunting eyes, smoking a Marlboro I believe.

Glaringly handsome...and so is the Marlboro man. :)

Good post Travis. Never knew about the man himself, it is nice to know the first one was really a cowboy.

The sweat stained brim, the bandanna to stop the dust, the eyes that have seen enough to know where exactly home is...

Hey Travis, I'm joining in MTM from my corner of Aus! My post is up for this week. I also remember the marlboro man, fascinating story, thanks for sharing xo

Travis, The snowman is on my blog!! Ye hah!!

dam you have some great posts dude

It's hard to imagine Marlboro's as "mild as May" and feminine after C.H.'s picture. Wow!

I LOVE that story. Who knew? Idiosyncratic, independent people like this are so fascinating and cool to me.

Coincidentally, I've just put up our MTM at WomenofMystery.net , and we've got a cowboy theme, too.

Now, I'm off to read all the other great links!

I loved his quote about women and horses. That was an interesting post--thanks. And thanks for the link!

Another awesome MTM post. I've given you an award...come on, you knew it was coming! Keep writin' man. You rock.

Patti Abbott takes us to the Detroit Historical Museum. Thanks.

I remember those commercials kind of making me want to smoke.

I loved your post. I remember the Marlboro man in ads and commercials. Never knew who he was or anything about him.

My MTM post is up. Way late due to power outages today from winter weather in Kingston, TN.

What a great post! Coming from an advertising background, I'd heard this story before, but I love your touch.

Great post, Travis. I love Mr. Long's quote about a good horse being sweeter than a woman. Spoken like a true cowboy.

CH Long is my husband's grandfather. I enjoyed reading your post!

Your blog keeps getting better and better! Your older articles are not as good as newer ones you have a lot more creativity and originality now keep it up!