When most people think of country music they think of Nashville. They think of the pop music with a fiddle They think of over-starched shirts, cowboy hats, and sequined western shirts.

I don;t much like that kind of country music.

But I LOVE Texas country music.

Yes there is a HUGE difference.

So one of my favorite events of the year is Homer's Backyard Ball which takes place in an empty field on the east side of Amarillo each and every May. 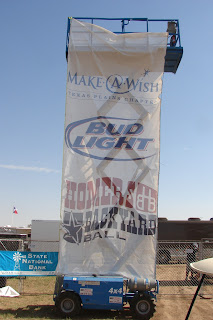 The event started as backyard party at a guy's house back in 1997 and has now blossomed to an all day music and food fest with an impressive lineup of bands each year, with proceeds benefiting The Make A Wish Foundation.

This year's headliner was Cody Canada and The Departed.


But the headliner didn't hit the stage until well after dark and for most of the day it was hot and sunny. Everyone has different ways to cope with the Texas heat but most people bring a canopy of some sort so the place begins to look like a tent city after a while. 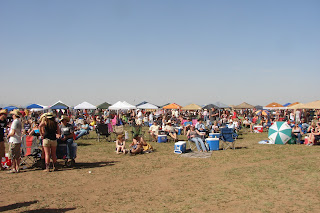 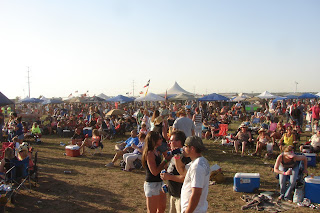 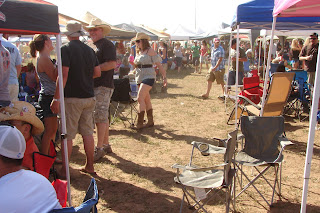 My group of friends was no exception, but a tent alone is not enough to coll off a big hairy fella like me. So I got in touch with my inner pirate, by kicking off my shoes and letting the rum flow underneath my awning. (By the way, that fella with the fancy ink on his leg. He actually took all of these pictures except this one. His name is Damian. He possesses mad skills with a pogo stick.) 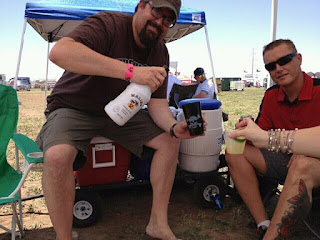 Some don fancy hats to keep the sun off of them. 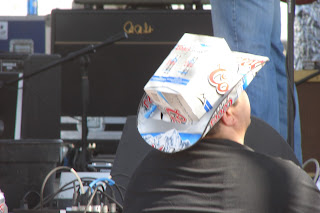 After seeing this hat, I realize the box that Coors Light comes in is actually more valuable than the stuff they call beer in these silver bottles.


Some prefer their beer delivered in a high sped manner. 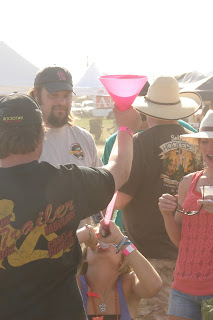 As the beer flows, so does the tunes. Here is a video from Casey Derry, of one of Amarillo's finest musicians.


And of course others prefer to keep cool with well-placed straw hats. 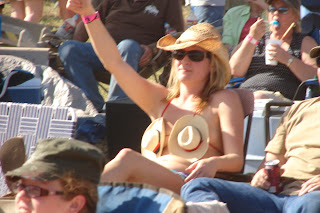 I've been trying really hard to blog at least once a week so here are some random thoughts from the past seven days.

You have probably heard that a private company SpaceX launched a rocket into space this week.

But did you hear that along with the cargo on board headed to the space station there was also a number of people. okay not really people, at least in the living sense, but their remains -- their ashes? For the sum of three grand Space X along with partner Celestis will release the remains of the dearly departed while in orbit.

Who says you can't buy your way into heaven?

James Doohan the actor who played Scotty on Star Trek was beamed up for the last time in this recent flight. Actually this was his remains second attempt as a failed mission dumped him into the Pacific ocean back in 2008.

Talk about Star Trek : The Next Generation

In other news I created this short video for my own, and hopefully your, entertainment.

And last but not least I have to share this with y'all. I write for a Texas football magazine and by far the largest part of the job is creating the profiles for the MANY high school teams here in the state. Some of these are really out of the way places. Tiny little towns that play 6 man football and almost no one except those from there have ever heard of. One such town's high school is nicknamed the steers.

Now for the uneducated a steer is a castrated bull. If you are really uneducated let me explain more. Castrated means the animals testicles have been removed.

Now in light of that fact having a football team called the steers seems rather asinine to me but as I was writing the profile and recapping their last season I noticed they had lost one game by two points. I couldn't resist writing this brilliant (if I do say so myself) line ... And in the final non-district tune-up, the Steers came up a pair short in a (56-54) loss to Silverton.
Posted by Travis Erwin at 10:23 PM 8 comments:

And Down The Stretch I Come

I believe in Karma. As I pointed out in THE FEEDSTORE CHRONICLES the word karma is too new age for some folks but whether you describe it as "you reap what you sow," "an eye for an eye," or "you get what you give," I think most of us believe in the principal.

This past weekend I felt as if my karma was being tested.

It started Friday night. My son had soccer practice for his traveling team and we had a few other errands to run so it was nearing 9 PM by the time I pulled into our neighborhood Sonic Drive-In to feed my family. 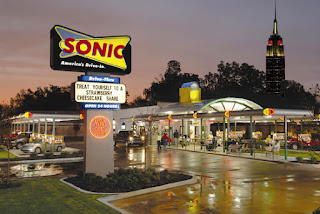 Yeah I know, great parenting but just wait it gets worse. As I am ordering burgers and tots and foot long conies for my clan, a new Trans-am or Firebird or some other such car pulls up next to our minivan. 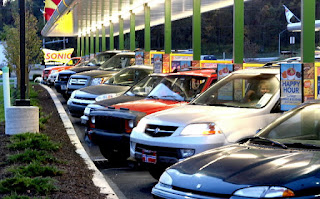 The vehicle is driven by a young, 17 or so, boy. His radio is thumping loudly with base. So much so that I cannot hear when the sonic guy asks me a question. I shoot the kid in the thumping car a look. he flashes a cocky grin and if anything turns up the radio even louder.

The Sonic guy repeats my order but all I hear is the last line. "Is your order correct?"

Casting an eye over at the Based Out Buffoon next to me, I say loudly, "I have no idea if that is correct because the kid next to me has his radio turned up way too loud!"

At this point the kid's buddies join him and feeling cocky he is bragging while grinning at me. "Hey guys come check out my stereo. Apparently it is really loud. I didn't know it was so loud. have you guys ever heard a radio this loud?

I heard enough so I backed the minivan up a few feet and stepped out of my vehicle. I had a few things I wanted to toss int he trash anyway and I wanted to let the mouthy little punk get a good long look at all 6 foot 5 inches and 290 pounds of me. Just to let him know it wasn't advantageous for him to continue flapping his gums.

Suddenly quiet the punk gave me a curt little nod as I passed by and according to my wife his buddy said, "Man that is a big dude once I strolled by on the way to dump my trash."

All I know is both they and their radios were silent from then on.

Then after soccer games Saturday morning and a bit of cinematography Saturday afternoon I stopped in Wal-Mart for a few items. Now I despise Wal-Mart but my wife loves Lime Salt for her beer that is only sold at Wal-Mart so like a dutiful husband I stopped there.

I carried my purchases which included a case of Shiner Bock and an 18 pack of Corona up the the counter. 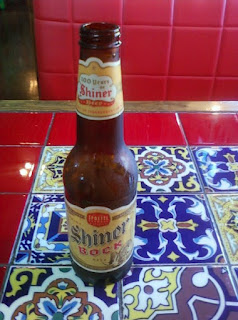 The lady took one look and asked, "Do you live in a house or an apartment?"

"Good," she said. " because I live in an apartment and I hate people like you who stay up all night drinking and being loud while I'm trying to sleep."

This impromptu rant rendered me speechless. A damn rare event I might add.

So I drove away from the store pondering her anger and bitterness. For a little bit I even wondered if I had done something to deserve her scorn.

But only an hour or so later I was sipping one of those cold Shiner Bocks and watching the Kentucky Derby. 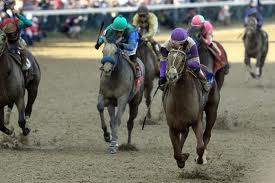 I was still pondering my karma's state when the horse I"LL HAVE ANOTHER galloped across the finish line. I'll HAVE ANOTHER for the win shouted the announcer and it was at that point I realized the bottle in my hand was now empty -- a sign if I've ever seen one. Yep, that gal at Wal-Mart was just plain crazy. Had she been right ROUSING SERMON would've taken the win rather than finishing 8th.

So I hoisted myself off the couch and proudly said, "Yep, I'll HAVE ANOTHER."

Too Old For Jersey Shore, Too Young to Crochet

Taking a look at my recent output it's hard to imagine I once was a prolific blogger. And truth of the matter is I've had plenty of things I wanted to share with you but sadly I'm not allowed to. Not yet anyway, so I've been going with the philosophy it's better to say nothing at all than to risk saying too much. But I miss you guys so I'm going to try and be a bit more present in the blog world not only here, but at the various blogs I miss reading as well.

Life was hectic last month, not only writing wise but everyday life as well. My wife had knee surgery to replace her ACL after attempting a daring, one-legged stop of a soccer ball during my son's practice. Okay it wasn't all that daring, but it did prove to be dangerous. She now has a cadaver ligament and I can only hope someone like Pele was the donor so that next time Jennifer can boot that ball back with style.

The recovery period nearly drove my wife insane. I came home one day at lunch to check on her only to find her watching Jersey Shore. The next day she dispatched me to Hobby Lobby to purchase her yarn and crochet needles. On day three she delivered the best line of the whole ordeal when she said, "I'm too old to watch Jersey Shore and too young to crochet.


Now some dating advice from me in the form of some random photos from my phone. Why? Because I can't really talk about what I want to.

Begin your date by freshening your breath with some of these ... 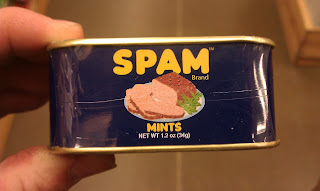 because what gal doesn't love the smell of patted meat?


And when dinner is served don't forget to wash it down with some of this fine Texas beer. 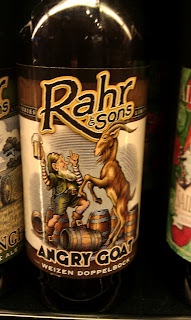 And last but not least folks, if your speed date goes particularly well ... you can expect one of these. 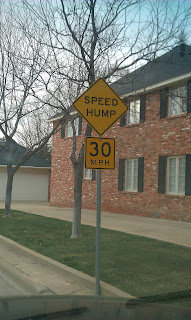