Are those teeth marks on my butt?

You can tell I have a lot of free time on my hands here in Oklahoma. Three posts in one day. Don't get used to it. It ain't likely to happen again anytime soon. Matte of fact his will most likely be my last post until Sunday when it will be time for a new addition of The Feedstore Chronicles. If you are bored between now and them click and here to go back to read any of the ones you might have missed.

Remember last week I was went on a rant about Lady Luck being ticked at me and not showing up when I needed her? Well apparently Lady Luck is a blabber mouth. Seems as if she has been spreading evil thoughts about me to her sister Karma. And let me tell you Karma is way more into revenge than Lady Luck.

Remember my rant yesterday about my fellow students, especially the wannabe athletes? Know what I did yesterday after posting that blog? I went down tot he pool and played about two hours worth of water volleyball. And guess what. I woke up with a sore back. Maybe if I whisper sweet nothings to both lady Luck and Karma they will rub some BenGay on my lower back.

So I take it all back. Mt fellow postal students are the brightest, most beautiful people on earth, especially that dude with the foil, wherever he may be. Okay that was all BS but his next part isn't.

In order to repent I'm going to spread some good Karma around. I want to thank all of you for taking part of your day to read whatever crazy nonsense I happen to post. I'm still a bit amazed how quickly this blog has taken off. The numbers of visitors grows daily and for all of you who take the time to comment, thank you. You give me the motivation to keep coming up with something.

Now I have a favor to ask of y'all, actually three favors. My friend Katrina just launched a blog here on blogger called Texas Tawk. Drop in and offer her some encouragement the same way you have me. Now to favor number two.

This is a picture of myself and Britta Coleman taken at this years Frontiers in Writing Conference in Amarillo, Texas. way back when me and Britta took a writing class together. 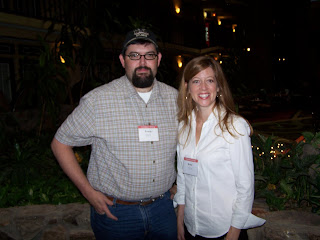 Obviously she learned more than me since she has a great novel out called Potter Springs and while I whole-heartedly recommend you go buy it that's not the favor. you see Britta has this blog that she has maintained far longer than mine has been around. But she posts erratically, I know she's probably busy writing her next novel instead of blogging but I still think it would be funny if quite a few of you stopped by her blog and left a comment something along the line of Hey, Travis said you need to blog more often. By the way when Britta does post she opens the door for some really good discussions.

And for the third favor? Head on over to the criminal brief site and read Deborah Elliott-Upton's article on risky writing. She's the one who urged me to take a chance and turn my short story Plundered Booty into a novel.

Okay that should be enough homework to keep y'all busy while I'm driving back to God's country, or as the rest of the world calls it -- Texas.

By the way don't forget, my hundredth posting is fast approaching and every comment gets you an entry into the Grand Prize Game. ***Hint -- Part of the prize is related to today's post.***

Email ThisBlogThis!Share to TwitterShare to FacebookShare to Pinterest
Labels: Friends, Me, writing life

fighting insomnia, I came here by way of Bubble Wench's blog. I like it!
I had to drop a line, to let you know that my friend and I, hear the voices in our head. Tandom-like. We are writing a book (books, actually) together. I totally get what you say about letting those voices be heard. . . one way or another!

I'll be back. Thanks for visiting.

Thanks for stopping by my blog, Travis;)) And looks like you had a blast at your writer's conference as well.

so the prize is the volleyball that gave you a sore back, right?

i will drop by to see the newest blogger...and here is my entry!

I'm hoping that the prize is that tube of Ben Gay you got from that lady named luck and her lover named Karma...

Enjoy your homelife before they send you back to the reaches of Norman.

Well I thought I would stop by and say hi after you were nice enough to pay me a visit. Enjoyed reading your blog and good luck with the writing. I am an aspiring writer but I have been stuck on the first chapter for the last 7 years. Maybe one day. Anyway hope to see you around the blogging world. Take care.

Hey Travis--thanks for the plug and "Yes" I should be writing more in my blog. I'm doing rewrites on the first third of my book --still got 2/3 to write and rewrite. Stupid of me but I gave myself a deadline of the end of September to have it totally finished. Am I nuts? Just wondering do men have more free time?

Sweet, another Texan. I was raised in Texarkana. I sure do miss the Lone Star State. I'll never get my wife to agree to move there, though.

Gotta watch those two ladies (Karma and Luck), they can be spiteful!

Of course, in Lady Karma's case, it's not really spite, since we deserve it...

All these favors, my goodness, I feel like I am back at work!

Dude, you have the best titles ever!

Sorry to hear about Karma...and your back. Hang in there. :)

I went over to Britta's blog and gave her a howdy. Also read the article on risky writing. I love the idea of it being a permission slip to yourself. Let 'er rip.

To Katrina,
I share your sensibility to micro-manage. If you're like me, it's become a habit that's kept me from seeing The End on my screen. I'm about 2/3 of the way through my first novel. Recently I decided to kick my own butt and write the remaining chapters in sort of a hit-and-run fashion. I'm allowing my self to write shorter chapters which will be fully furnished later. Then I'll go back and see what needs doing. I set a theoretical completion date of the end of this year. I probably won't make it but it's worth a shot. Then I'll take a few months to tweak and tweeze the thing. Then I have a lovely agent who wants to see it.

Good luck with your writing.

Hey Travis! Thanks for the plug and hey, y'all (yep, I'm Texan, too!) we have room for comments over at www.criminalbrief.com every single day. :-) Travis, I thought it interesting you're trying to butter up Lady Luck & Karma by asking favors for three ladies. (And thanks -- you gave me an idea for a short story without even knowing it...hmm, maybe two.) Okay, Ben Gay or a volleyball...I was hoping it was copies of my & Britta's books. Or chocolate. You can never go wrong with chocolate.

Hey, Travis, when are you going to send me a copy of that pic? I think it turned out rather swell...

Me again. I updated the blog today, and many thanks for sending your blogtastic readers along. What great folks. (Waves to Bluefingers, Tena, Dawn and Terrie...and Debbie!)

Thanks too for the Karmic compliments...although I think we both learned an incredible amount in that writing class. Your day is coming soon, my friend, I do believe.