First off I'd like to wish a Happy Halloween to all. I have tortured and scared all of you for many months now. You've endured my terrible typos, gruesome grammar, and shoddy story telling. I'm sure many of you have went so far as to say, "And this guy calls himself a writer."

Well, I'm proud to announce that starting today you can read in it's entirety and completely for free -- An actual sample of what I affectionately call my -- Real Writing. That's right head the story I blogged about selling a month or so back is now up on the UNDERGROUND VOICES site. Head on over and read my short story titled, The Simplest Of Sounds. Don't go expecting humor however, as it is a dark tale. The story is one of my personal favorites and I'd love to hear what you think, so drop me a line in the comments after you read. Or send the fine folks over at Underground Voices an email and let them know you enjoyed what you read. Who knows maybe they will buy more of my stuff in the future.


Now in the spirit of Halloween, more pics ... 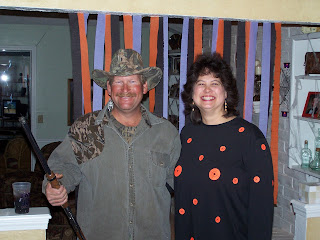 FRIENDS ROB AND ARLENE, BUT SEEN HERE AS A TED NUGENT AND TARGET.

My, those are some strategically placed targets, are they not? 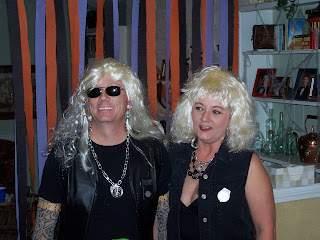 IS THAT STEVE AND BERNIE, OR DOG THE BOUNTY HUNTER AND BETH? 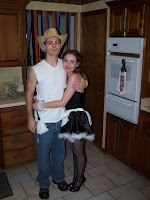 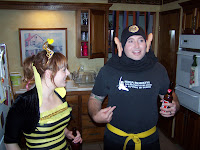 FARMER BROWN WITH A FRENCH MAID. MARIO AND PRINCESS TOADSTOOL, AND A BUMBLEBEE WITH A MUTANT NINJA MONKEY. IF THAT DOESN'T SPELL FUN I DON'T KNOW WHAT DOES ... 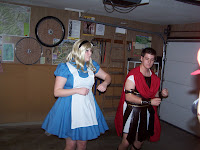 MAYBE ALICE GETTING DOWN WITH A ROMAN SOLDIER.


AND ONE LAST LOOK AT YOURS TRULY, The beads were woven into my actual beard and they were a hell of a lot easier to get in than out. I sued old fashioned moustache wax to make mine stand out like that, the chest hair is real, Mr. Smee from Peter Pan wore glasses so why not me, the costume cost about fifteen dollars top to bottom and the clothes were all from the thrift store with the exception of the tattoo sleeves which aren't really shown in any picture but trust me they looked cool. They came from Wal-mart and cost about a third of the total price of the costume. But still, I spent more on rum than anything else. Hope that answered all of y'alls questions.
Don't forget to check out the short story and report back what you think.
Posted by Travis Erwin at 10:17 AM

Email ThisBlogThis!Share to TwitterShare to FacebookShare to Pinterest
Labels: a strange world, Me, My Writing, success, writing life

Travis, I am so happy that you are a writer because you have such a masterful way with story telling.

Thank you for sharing this with us.

Happy Halloween to one and all but especially to the little goblins among us!

Happy Halloween and Happy birthday to my oldest little boy...

I really liked the story. Very polished. Great description of the environment; took me back to my hunting days.

awesome photos travis! looks like you had a ball.

i was the cave whore and will get around to posting a pic when i get one sent to me because i couldn't find my stupid camera.

cool beads in the beard dude.

going to check your story out now..

I love the pictures!

I'm off to read The Simplest of Sounds.

Oh, wow. That is a powerful story. Vivid, suspenseful, and haunting.

travis, it seems so stupid to tell a writer that something is well written. you are a writer. you know it's well written. so, stupid or not, i thought i'd tell you anyway.
i loved your story....and truely hope from the bottom of my heart that it is only a story and not something you had to face in reality. because surely, something like that gets relived every night in your dreams and fills your days thoughts with clutter.

Yes, as Charles says.
I like too how you counterpointed.

I love the Dog the Bounty Hunter and Beth costumes. Awesome!!

Arg, you's be makin a good pirate there, matey ;)

Your story is fantastic! What can I say? I'm impressed - and it's a perfect read for Halloween. I don't usually like "dark" stories, but this was really good :)

So you really ARE a writer! I never had any doubts. You could convert your blog to a Lewis Grizzard or Patrick McManus kind of thing and make a bundle.

The pirate look suits you.

Terrie - thanks for the plethora (I really like htat word and I think it is underused) of compliments. I always enjoy praise for my work especially from a fellow writer who understands the blood, sweat and frustration behind creating a story.

Charles - Same as I said for Terrie. A compliment from a gifted writer means a lot.

Cher - My wife begged me to keep teh beads in for a while but I couldn't bring myself to do it. I think she just wnated them there so she could yank 'em whenI got out of line. And it is good anytime a piece of fiction can make someone wonder if it is a true story. That means I made you suspend your disbelief as you read.

alyson - It's not often I can inspire someone. Thanks for stopping by. Hope you come back again.

monnik- See comments for Terrie and Charles. You guys are making my day.

Bernita - What little of your work that I've read has been outstanding, so I really appreciate you taking time to read and comment. Thanks.

Michelle- It woudl be even funnier of you knew how out of character is was for both of them to dress that way.

Tee- Arghh! I knewed who ye was right from the git. I used to write a lot of dark stories but now I've mostly working on humorous projects.

Stephen - I really are. Ot at least I try to be. Thanks for reading.

Effective costumes don't have to be expensive.

Ha, ha, I'd never thought of beading my beard (when I had one).

Thanks for cruising by my place. I can't wait to check out your story.

Great pictures! Last year was our first Halloween in PA and our neighbors had their annual party. We had to miss it and were looking forward to the party this year. They didn't have it for the first time since they moved in 7 years ago.

Oh well. Now I have another year to think about what I want to be next year.

I will read the story later I wanted to see the Halloween Pictures. Those were some clever costumes, and funny for sure.

Kristen and I went as Papa Smurf and Smurfette, getting blue body paint off is not fun.

I will read your story I promise.

I could feel the snow beneathe my feet, see the gleaming coat of the elk, experienced the fear, hesitation and resulting determination.

Loved it. Keep on writing; you have the gift of bringing a story to life.

Wait! Someone asked if the chest hair was real? hahaha

Richard - I'm pretty much a tightwad so inexpensive costumes are the only way I'll go.

Travis - We Travis's have to stick together. So when I spotted a link for your blog on Charles's I had to visit.

Jenster - this was the first ime I dressed up since Junior high school.

Phats - I could never do body paint. Maybe bondo to cover up the dents and dings.

Shauna - Thanks. It is alwyas nice to hear something works in anothers mind they way you intended.

Aaron - I got an email that said nice touch with the added chest hair - only I did not add any chest hair. So technically no question, just wnated to make things clear.

Your story - I loved the story. I really think you should flesh it out more and present it to a publisher. I think your story could sell very well but you need to give more to it. This coming from the queen of procrastination and the inability to complete anything longer than 4,000 words because it would take EFFORT! Hah!

Love the costumes. The chest hair? GAHROSS! You need to do some manscaping and give it more shape and finesse it. The back? Shave it ALL!

Congrats on the short story!!!

I still think we should get a peek at the tattoo sleeves. 1/3 of the cost, and no photos? Maybe a reshoot is in order (sans difficult beadwork.)

Appletini - Cool is all I get? I bet you would have more to say than that to Johnny depp. Okay, I'll admit it I wasn't near as dashing as Capt'n Jack but by the end of the night I was swaying when I walked as much as he did.

pretzel - Underground Voices is a publisher of short stories. They have their monthly webzine plkus an annual anthology. The Simplest of Sounds is a story I wrote a long time ago, and unlike some of my stuff I feel like I am done with it so I have no plans to expound upon the piece.

christen- Thanks. Maybe someday I'll be as prolific as you.

Britta- Glad to hear from you as always. Int he Captain Morgan pose from the previous post you can see the tat's if you click on the picture and make it full size. Sorry I only dress up once a year, or actually, more like once a decade.

I checked out the story. From one Travis to another, very well done. You description hooked me and I really enjoyed it.

If you're interested, I've been writing off and on for many years. I've posted a few on my blog...you can see the links to the posts if you scroll down on my sidebar. No pressure.

Travis -- great story, seriously. I was hoping he'd do it, because men like that need to be blown away and I don't mind saying so, but I was worried about what happened to the boy afterward. I mean, obviously he's doing just fine now, and we knew his family would be all right (although I'll bet his mother still feels the weight of guilt over being unable to resolve the situation herself, for leaving it to her thirteen-year-old son, even though there wasn't anything she could have done).

But his life must have been rocky for a while -- police, Juvie, counselling. People who'd avoid him or fear him, people who'd think he must feel terrible for what he did, and then recoil when they found that he didn't. I think it was the best solution under the circumstances but that doesn't make it a good one.

Sorry, I get thinky about this sort of thing. But your story made me think about it, and about the protag, and only the good stories do that. Excellent job.

Thanks for sharing your story. I look forward to reading it. Nice costumes by the way. I am guessing however too many folks will not being Dog anymore after his little tirade got caught on tape. Hope you had a great Halloweeen.

A tale nicely woven. Sorry it took so long for me to get to it!

Sorry it's taking me so long to catch up with you. AMAZING story Travis.. I'm totally blown away. It gave me goose bumps and made me want to cry for sadness and joy all at once.