Come On Baby, Light My Fire

How long has it been since you ate a hot juicy steak right off the grill? Well pardner, that's too long.

You know those ads right? The ones where Sam Elliott proudly proclaims ... Beef, It's What's For Dinner
I tried to get him to guest blog and say this ... How Long has it been since you read a post on here about writing. Well pardner, that's too long.
But Sam was busy, so it is solely up to me to deliver a meaty post on the subject of writing fiction. 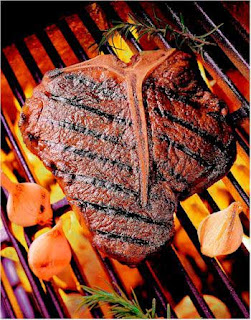 However, there is one small problem. I can't even get the charcoal lit on my mental grill. Right now my writing is a cold hunk of fatty, poor quality ground chuck. Sure the right flame along with a bit of spices could jazz it up to make one fine burger, but I am finding it extremely hard to maintain the humorous tone I need to make the novel version of Plundered Booty work. The problem is I need to set up things to make the plot believable down the road, but damned if I have been able to provide the set up and make it funny. Heck, I'd even settle for entertaining at this point.

These struggle have made me get to thinking how important timing is to a novel. Yeah I know that seems obvious, you don't want to give away the plot twist or the whodunnit in chapter one, but I'm talking about the more subtle points.

What if the opening scene of the first Harry Potter book had been of Harry turning Dudley into a toadstool? We as readers would have looked at him as a character totally different, but instead we saw Harry as a victim right from the start. We hoped for something good to happen to him. We were already pulling for him to find an escape from the Dursley's and hen his magical abilities were slowly revealed both to us as readers and to Harry himself we were as quick as Harry to snatch onto that hope.

Or in Great Gatsby. What if we had seen Gatsby meeting with Meyer Wolfsheim(the guy with mob ties) right from the beginning? It isn't until we know Gatsby as a character that Fitzgerald shows us the means behind Gatsby's wealth. By that time we don't care that Gatsby has gained his wealth through shady dealing we already see him as a tragically romantic character willing to do anything for his heart's desire.

So my advice. Watch your timing really step back and see how and when something is introduced affects the feel of the story you are writing. Unfortunately novels are not like steaks. There is no chart -- Red, Slightly Warm Center = Rare, Warm Pink Center= Medium. Nope the on;ly way is to pick up your knife and slice off a chunk and plop it in your mouth and see how it tastes. Or better yet serve up a portion to a few trusted readers and see if they like how your words taste. If they gag and spit it out you know you're riding, or writing, a rancid cow.

Now where did I leave those matches and that lighter fluid? I need to get my flame going.
Posted by Travis Erwin at 1:27 PM

Email ThisBlogThis!Share to TwitterShare to FacebookShare to Pinterest
Labels: my reads, writing life

Only a man would compare writing to meat. LOL! I hope you get your mojo back soon!

I do love your way with words and your imagery...
If you can't light the charcoal...switch to gas...go for a burst of words...and see what happens. Sometimes just doodling around about nothing brings you right back to where you need to be. In the meantime...enjoy your steak....

I do love your way with words and your imagery...
If you can't light the charcoal...switch to gas...go for a burst of words...and see what happens. Sometimes just doodling around about nothing brings you right back to where you need to be. In the meantime...enjoy your steak....

sorry you got this twice...no idea why. Just means it's really relevant!! LOL!

I had a good steak yesterday. Your opening line is a twist on the "wolf brand" chili advertisement I believe. I use it all the time myself.

I agree. Sometimes the less we know about a character in the very beginning of the story the better. Then we can reveal along the way.

As to Plundered Booty could you put the set ups in the first draft without them being particularly humorous?

Then on a later draft, the humor will come! (I am such a Pollyanna.)

That was fantastic. Now I want a steak, and I feel like burning stuff.