I'll Tell You What To Believe, another Saga of the Second Rate Santa

I don't want this blog to become All Christmas ... All the Time, but I did say I would get another Second-Rate Santa Saga up this weekend. But this will be the last one until late next week or even the weekend, because I'd hate for my readers to require insulin after too many tales of sugar plum fairies. In another couple of weeks we'll all be so sick of hearing Jingle Bells and All I Want for Christmas is a Hippopotamus that the only way to make our spirits bright is to mount a giant hippo head above our fireplaces. But I digress.


I've had a hard time deciding which Santa tale to go with next. There is my personal favorite,which I think will be titled Midnight Meat, - but I have special plans for that one later on in the month and besides, I need to set up a few things through other stories first. There is one highlighting the immaturity of grown men, myself included, that I'll call, Ye Olde Yuletide Log, but since I described the three kinds of adults that visited Santa in the last post, I think I'll do the same with kids in this one. Again most of the kids fit in one of three categories.

The Awed - These were the kids that approached wide-eyed with mouths agape. To them I was a mystical hero capable of fulfilling all their dreams and wishes. The would climb up on my lap and speak their hearts desires in whispered tones. And they would listen with rapt attention as I instructed them to listen to their parents and not fight with their brother's and sisters. I'll tell you there wasn't near enough of these kiddos, but they were the ones that made it fun.

The Scared - Again these kids were wide-eyed and their mouths were open - screaming at the top of their lungs. "No! I don't Want to! Please Mommy, please!" Nothing makes you feel better than to instill raw terror into small children. I know what Quasimodo felt like. But it could have been worse. The parents could have gathered up torches and pitchforks. Instead, they handed me their squalling and bawling offspring and then stepped back and said, "Smile, pretty for you picture honey." Ever try to get a terrified kid to stop crying and smile? It ain't easy. Especially when the very thing they are afraid is holding onto them. 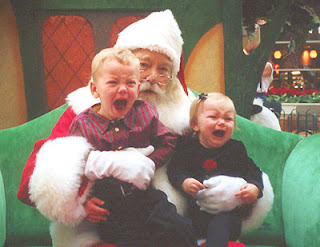 The Skeptical - These are the kids who walked up with narrowed eyes and smug grins. The IRS should hang around Santa's throne at malls and recruits these little doubters cause once they get on your case they can't be dissuaded. And is there really much difference in these two questions? "If you're really Santa then where is you Reindeer?" "Mr. Erwin, do you really expect me to buy into your claim that you traveled to Las Vegas solely for book research?"
They have the same ring to them huh? Yep, and it is about as joyous as the racket those Salvation Army Santas make out in front of Wal-mart. And here is a little tale to prove my point.

There I was sitting on my throne, well not my throne, the mall's throne they built for Santa. My throne is made of porcelain and doesn't have a stitch of red velour in sight, but at least there is always a good book near my throne. But back to Santa and the mall. The line was fairly long as it was a weekend afternoon. In times like that I fell into a routine. Welcome the next group in line, ask them what they want for Christmas, smile for the picture, and then tell them to be good little boys and girls because my elves were watching. In between I'd try to wave to the kids that gathered around the little white picket fence.

For a long time I noticed this one little girl about eight or nine standing there. I'd wave but she wouldn't respond. Finally, a small boy of about five joined her at the fence and finally the two of them along with a man and woman got in line. A good fifteen or twenty minutes went by before they made their way to the front. Here is the scene that followed.

"Merry Christmas," I shouted.
The boy smiled. She did not.
"And what would you like for Christmas?"
The boy said, "A new bike and a hamster."
I turned to the girl. "And how about you."
"I know you're not the real Santa Claus, and my mom won't let him have a live animal cause he squeezed our parkeet until it died."

At this point Galen, said smile and the flash went off, but the girl wasn't done.

"The real Santa does't have time to sit around all day taking pictures."
"So what does the real Santa do all day?" I asked.
"He builds toys."
"I have elves to do that." Yeah I now. I was arguing with an eight-year old over something she was right about and I was wrong, but I had to have fun somehow.
"And he has to feed the reindeer."
"They fly around and find their own food," I countered.
She rolled her eyes, "Right."
I appealed to her little brother who I decided was an easier sell. "You be a good little boy and Santa will leave you a surprise Christmas morning."
"Will you bring me a hamster?"
"I'll have to ask you mommy first. Santa can't bring you something unless your parents say it's okay."

At this the girl gave a hearty, "Huuumph," and hopped off my lap. She grabbed her brother's hand and drung him off with her. As she left I heard her say, "See, I told you he wasn't the real one. The Santa can do anything he wants. as long as Mrs. Clause says it's okay."

I couldn't help but laugh, but deep down I already felt sorry for the poor guy who would end up married to her.
Posted by Travis Erwin at 4:52 PM

ROFL!!! I was thinking that about the little girl too...I can just imagine who she has grown up to be!! Yeah, right!! Only if I say so honey...but I do love that the kid squeezed the life right out of the parakeet!! Hopefully no one gave that kid a hamster!! :)

Too funny...screaming, bawling kids frightened of what's holding on to them...that nearly made me wet myself!! :)

Marie Millard is sharing Santa photos all month...the first two have been hysterical..you two should get together...gives the holiday season a whole new spin!!

glad you liked the quotes..makes me even more eager to be able to read this WIP when it's published!! I love books that have quotes in them..adds flavour to the dish!

haha TRAVIS!! I like these entries, please keep them coming. Why not Christmas all the time it is that time of year.

Did you see the council for obesity wants to see skinny Santa's. that is just not right.

As long as Mrs. claus says it's OK. That says it all right there. glad my son is too old for her.

I'd leave a comment but my wife says it's not alright. sorry

"The real Santa can do whatever he likes as long as Mrs. Claus says it's ok!!!"

BWAHAHAHA! That kid knows all about life. :)

I love these stories!!!

Gee Trav, I didn't know you were that much older than me that you were the Santa that heard me say that to my brother when we were little. ;)

That little girl? She's going to marry a nerdy little shit that makes a ton of money. She will tell him what to do and how to do it. But in the bedroom? She will be a tigress with a cat - o - nine she uses just to keep him in line. And he likes it.

Men like it when women tell them what to do. If we did not tell you what to do how the hell would anything ever get done? Women rule and men drool!

That poor parakeet. I hope Santa didn't give that sadistic kid a hamster.

It's hard to beat the logic of an eight year old.

I've been catching up on the few posts I've missed. LOL! That's some great stuff!

The screaming little ones must have made you feel you were participating in child abuse!

I love love love the picture, Travis... and I have to tell you, I have children and I know all children can at one time or another be a bit of a pain in the @ss, but seriously, it's very hard not to argue with them when they're that 'know it all' right... You are a man of great patience, I'd have threatened her with coal!

By the way, I'm on some kind of a cosmic weird thing today, you stopped at my blog the same time I was catching up on yours, and so did a few other bloggers today... freaky - I loved your first Santa post, too, I just didn't have anything clever enough to leave in the comments.

They really start the "bossy" at a young age.

Thanks for dropping by my blog.

Sherry - That girl is probably only about 15 now. I hate to think what she is like as a teenager. And I checked out Marie's blog. thanks for the link.

Charles - See comment above. that girl is probably 15 now. How old is he?

Alex - A suspect a wife with a British accent can get away with telling you lots of things.

Monnik - Goes to show all wives are the same.

Pretzel - I knew you would feel sorry for that parakeet.

Shauna - Glad to see you are back and recuperated from your trip to Costa Rica.

Bernita- It was enough to give a fella a complex.

Merry - I ripped that photo off the internet. I have no idea who those people are. And witty or not I love to read comments, but I know how it is. Sometimes I barely have time to read the blogs I frequent much less comment.

My daughter was terrified of the Easter Bunny when she was three. I know the feeling. She didn't smile for that picture and I forget where we put it.

My daughter, now grown, was the kid who projectile vomited all over Santa's beard. Really.

Hey I just saw my link. Thanks much!!!

Too funny! I liked the terror-inspiring Santa and the little girl's matter-of-fact statement: He squeezed the parakeet until it died.

Good times! At least it sounded like she might have actually believed in Santa Claus--just not you. That's something, right?

Travis,
That's true cause I don't understand half of what she says.
Or rather 'arf o'wot she sed

That is pretty good stuff Travis. Thanks for sharing. Kids do say the darnedest things. Have a good week.

hahahaha...santa is soooo leaving her some coal this year.

Another awesome tale. You have got to get these published in a magazine's Christmas issue someday (Esquire, are you listening?) . . . they really are priceless.

Travis! You are now and forever the mall Santa now to me! What awesome stories! and I have to say my kids would have been sreaming also - no offense to you! Man you cracked me up today!

Right up there with The Santa Land Diaries!

"If you're really Santa then where is you Reindeer?" "Mr. Erwin, do you really expect me to buy into your claim that you traveled to Las Vegas solely for book research?"

These Santa stories are fabulous!!

She was a little bitch wasn't she.