I'm not really a T.V. guy. I watch a bit of sports here and there. A few movies, but zero, zip, zilch in the way of primetime television. I gave on the major networks long ago, although the first season of Earl brought me briefly back. I loved the first four or five seasons of the Sopranos, but the series went on too long. Deadwood was good, but HBO left me high and dry on that one, and I consider Rome to be one of the best written shows of all time. Never, has a series ended so perfectly.

All that being said. I still have an old thirty two inch television that I bought better than ten years ago, just before I got married. Sure I've envied a few people their big screen HD models, but I simply never watched enough tv to justify buying something like that.

But guess what? My wife went to watch friends of ours daughter perform a Christmas concert with her high school orchestra. We'd also bought some raffle tickets to help support the music program as well. They announced the winner at the concert and we won this ... 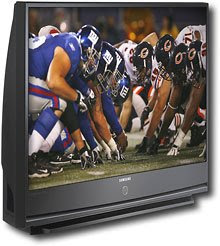 Oh yeah, that is fifty inches of Samsung HDTV for my viewing pleasure,a ll for seven bucks worth of raffle tickets. Yes siree, it is better to be lucky than good. Thank you Lady Luck for once again smiling my way. And if you're sister Karma were here I'd give both of a you a big kiss smack dab on the lips.

Prior to this I once won a thousand dollar hunting rifle for a twenty five dollar chance but this win tops that. So tell me. What's the biggest thing you've ever won?
Posted by Travis Erwin at 9:24 PM

Congrats on the TV! Trust me when I say I know how you feel :)

But,there are 2 that are tied for best: I wrote a short story for a local contest and it came in first place (25 bucks - and my first contest win - Yip yip). Also - I won an Olevia LCD TV through a drawing at work. That rocked.

i never win anything.

I can't think of anything good I've ever won.

oooh, i think the rifle was a way better win. the best thing i ever won was a living room set of furniture. i turned around and sold it because it was hideous. that and i was 19 and thirsty. ~winkity wink~

oh wait, how could i forget?! i won tickets to a rolling stones concert. on the floor. front row of the second seating. that was a phenomenal act. those old dudes can still rock.

I won a basket full off dog stuff...a leash, bones, a dog toy...that's about it.

I won a dollar on a scratch and win...

WTG! That tv is awesome. Might I recommend a network tv show called "Life"? - Wednesdays (NBC?)

I've been on a lucky streak with online blog promotional contests - winning books, mugs, etc. - a ton of cool stuff.

I guess coming in second in a nation wide term-paper writing competition for forensics students was the biggest thing I won - a hundred bucks and a lot of glory for my school and myself - but that was skill (talent?) that won me that prize and not luck. I've always done well in raffles, but not anything as nice as a tv!

The FL lottery up to 25 million this week! Dare I hope?

Usually when I win something it's 1) small, and 2) not something I particularly wanted anyway, like the two free ice skating passes I won in an elementary school raffle. (I'd fallen roller skating a few times and had no desire to get onto ice skates.)

Major applause for the new TV, though -- that's excellent. :D

This is your karma payoff for dressing up like Santa and letting an old man sit on your knee! :P

The Rome series was totally cool. I got it from netflix

First of all - CONGRATS! What an awesome prize, man! :D

The title of your post cracked me up. I haven't heard that phrase for awhile.

Let's see, biggest thing I won... When I was a teenager I called into a radio station and won 2 concert tickets to see Extreme ("More Than Words") ... My Dad took me and it was pretty darn awesome :)

You dman, (Note the variant spelling of it which will say waht I really mean because I didn't win it.)

Seriously, this is cool. Enjoy.

Travis you are on a roll...keep that luck going!! I won a road trip with the Toronto Maple Leaf hockey club and I've won hockey tickets to Leaf games..that's about it!

Nothing. I've never won a thing and have given up on Luck ever smiling on me that way. ;-)

Must be your lucky week. You won on my blog, too. Nothing so grand as a TV, but books are nice, too. Stop by and look over the remaining prizes to tell me what you want.

The most I've ever won was a hundred dollars on a slot machine in Vegas. Ack. That was almost a decade ago.

Travis, you lucky dog! The biggest thing I ever won was a small stuffed animal at the firemen's bazaar my grandpa took me to. But the best thing I ever found was a twenty dollar bill lying on the road. Yes, I stopped the car for that!

that's awesome! You see, you've been such a good Santa all those times!

Let me think the biggest thing I ever won would be ... gosh I have never won anything big. oh well.

Wow! Good for you! You're going to love watching it!

I once entered a friend in a contest he didn't want to enter & he won a car.

That's really nice! Sounds like you're really going to enjoy it!!!

And that is about it. Oh, we've won stuff from the kid's carnivals at schools. I once won a poetry contest about my mother when I was 13 and took 1st place. I won 4 tickets to our local amusement park.

Congrats on your win Travis and enjoy your TV.

WOW! What a prize from a raffle!! Merry Christmas to you!

I once won about a grand gambling in a casino playing Keno. Other than that, I have never won anything big. I play poker a lot, but not for high-stakes, as that's a sure way to ruin friendships.

I think Lady Luck smiles on a select few repeatedly, then leaves the rest of us out in the cold.
My MIL is constantly winning stuff. Then she takes my kids places and THEY win stuff. The best/biggest thing she ever won was a trip for two to the Super Bowl back in like '95. The funny part is, she entered at her then-boyfriend's company christmas party. The funnier part is, they broke up before either of them knew she had won!! So she took her son instead.
I've watched her randomly walk through a casino and drop a single dollar into two random machines and win on both of them. That just ain't right.
I will say it's true that you can't win if you don't play...but I don't play because I never win. Vicious circle I guess.

That is freakin awesome!! Congrats!

I win very little. I won $125 in Oregon on vacation last spring playing Keno. That was a big nice suprise.