If Walls Could Sing -- My Town Monday

The stucco walls are faded and cracked. The paint along the window sills is chipped and flaking. The surrounding neighborhood is old and deteriorating for the most part. But my infatuation with this building dates back to when I was a young boy. 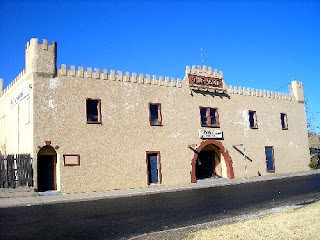 As my mom would drive by, I always stared at the structure until it was no longer in sight. It's castle-like roof line, arched doorways, and stuccoed walls always sparked my imagination. My mom dismissed my infatuation saying it was a place for drunks and hooligans to hang out, but I vowed to one day enter those mysterious walls and see for myself.

The Nat sits on the corner of Georgia and 6th street. 6th is part of the fabled mother road of old. Route 66. The surrounding neighborhood is old, slightly seedy, but 6th street itself offers a diverse collection of businesses -- antique stores, Texas music bars, biker bars, a pet shop specializing in birds, and some of the best and greasiest food the city has to offer. But all of that is another post for another day. This week I'm talking about The Nat.

The Nat started life in July of 1922 as a swimming pool. According to my research, Natatorium used to be the word to describe an indoor pool. originally the place had a open roof but after one season it was enclosed to offer swimmers a place to dip their heels year round.

The Nat lasted only four years as a swimming pool before a new owner purchased the building, and covered the hole with maple wood creating a top notch 10,00 square foot dancing floor that was said to be one of the finest in the entire Southwest United States. The Nat soon became a favorite hangout of the flappers during the roaring 20's.

But the depression hit the business hard and that owner sold out in the thirties. In order to drum up business the new buyer added the castle features in an effort to entice travelers on Route 66 to stop. He also added a cafe.

With it's impressive dance floor and prime location on The Mother Road, The Nat ushered in the big band era. Many of the best bands of the time played here. Including Tommy Dorsey, Louis Armstrong, and Benny Goodman. It is also said that around that same time the upstairs had a gambling hall.

The King of Texas swing Bob Wills played the venue on more than one occasion.

As the times changed so did The Nat. Soon Rock & Roll took over as the "in" music and bands like Buddy Holly and the Crickets came up from Amarillo's neighbor to the south, Lubbock. Roy Orbison, another Texas boy played to shows of close to two thousand inwhat had to be double the amount that he fire marshal would allow in today's times. Little Richard was arrested at The Nat in 1956 for disturbing the peace after inciting the crowd into a frenzy before they spilled out into the streets. Maybe that event led to my mom's disapproval of the place. 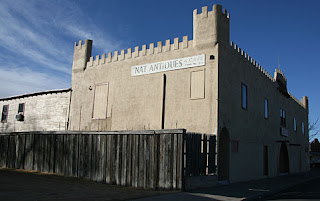 In recent years, The Nat has hosted a variety of concerts by Texas musicians like Asleep at The Wheel, and Joe Ely. I finally got to attend and two-step across that old maple floor to shows by Pat Green and Robert Earl Keen.

And The Dixie Chicks played a twin bill along with a local band The Groobies. It was at this concert that the chicks first heard the song Wide Open Spaces which was written by Groobie member Susan Gibson. Wide open Spaces was the song that eventually launched the Chicks into national prominence.

The concert schedule has slowed down, but the occasional show is still put on there,but most recently the building has been sued as the venue for a local professional wrestling organization.

In 1932 Franklin Roosevelt held a fund-raiser rally at The Nat, and in 2006 Kinky Friedman stopped at the venue during his gubernatorial run.

But the story doesn't end with it's interesting history. Like many old building with long and storied pasts, The Nat is said to be haunted.

From a young girl who appears in her swimming suit that is said to have drowned in the very pool that still lurks below the wooden dance floor, to an elderly couple that is often spotting gliding around the dance floor when bands play, to a woman with a red spot on her evening dress that is always seen upstairs. The woman is said to be a former patron of the gambling house that had a glass of red wine spilled on her the night of her death. She did not die at The Nat but legend has it she hadn't wanted to leave that night.

Also despite being repainted dozens of times the words Monty McGee and His Orchestra always bleeds through the new paint, leading some to believe the graffiti is reapplied by yet another spirit occupying the structure.

The site was placed in The list of National Register of Historic places in 1994 and in 1995 it was designated a Texas Historical Landmark.

Today the place not look like much and the musical notes might be scarce but not many venues of this size can claim to have once had the likes of Dizzy Gillespie, Duke Ellington, and World War II pin-up girl Gretta Garbo grace their stage, while also playing host to a few prominent acts of today.

It's no wonder the ghost's don't want to leave.


POSTS FROM OTHER MY TOWN MONDAY PARTICIPANTS

Debra -- Who has left her heart In New York City, New York this week.

Email ThisBlogThis!Share to TwitterShare to FacebookShare to Pinterest
Labels: My Town Monday

The Nat is a place just dying to have a mystery written about it. I can tell!

I'll let you know as soon as our MTM is up.

Ok,
So we have My Town Mondays, Two-line Tuesdays (2 lines from a book you've read this week, and one from your own?) and Book recommendation Fridays... and meme's. Thanks for showing me the ropes. I'll try to keep up.

Hey, you need to call up Ghost Hunters on the Sci Fi channel and have them investigate. They can usually find something or other to label paranormal.

Hi Travis,
Lots of history on The Nat that I didn't know. My grandmother lived a few blocks from the Nat and as a child, I always wanted to go in but was told it was an evil place. My grandfather was a deputy and was among the police who arrested Little Richie on that fateful night. Richie's early Rock N Roll was considered "Too Suggestive" and I was told that was why they arrested him--when they released him they told him to NEVER come back to Amarillo! Especially after that incident I wasn't even suppose to "look" at the Nat--which of course made it that much more interesting!
My grandfathers pistol from that time recently has come into my hands and sports a pearl handle. A nice relic from the past.
But getting back to The Nat--I still have never been inside--now you have given me the desire to see
this "evil" place for myself.
Thanks--Travis. Very interesting!

And it's interesting to see how it changed with the times. Too bad it doesn't seem to have quite the same glory as it once did.

I incorporated a personal accomplishment in my version of My Town Monday this week. It's about the 20th annual 4-mile Trolley Run here in Kansas City, MO.
(http://jasonscottadams.com)
It was cool to read about that place, The Nat. I don't remember it for some reason.
Hope the family is well. Talk to you soon.

Wow, that's a great post! I love learning about buildings that are so rich in history. Thanks for sharing!

The Nat has been around! Fun, informative post! This week, my hometown post is on the gold mine in Julian, CA.

The MTM post is up on Women of Mystery.

Patti Abbott's MTM is up and everyone should read it. Terrie

Oh what an interesting tale. I love the stories of ghosts. I love the way old buildings change over the years and mutate into other interesting places.
I have posted my entry, managed to get blogger in draft to work!!

What a great post and a fascinating place !! I want to go there- Send in the ghost hunters now please !!
Also liked Katrina's story on Little Richard - brilliant !

Great building, great story. Every time I've traveled around the States, I can't get over all the great old buildings, and the Nat would have appealed to me too, especially if someone told me it was a hotbed of sin. And I don't believe you mentioned one single musical group there that I don't love.

I especially like the story about the woman with the wine stain on her dress who didn't want to go home.

Now that's a place with a history. Fascinating. Love the idea of the name bleeding through. A great setting.

TE: I'm in. Just don't have any Internet at home (I'm at the library right now). So I was not able to send you my MT link yesterday.

Very cool! Thanks for sharing. It's amazing how much history you live near!

What a fascinating old building! Great post. The Nat would make a great setting for a mystery or a paranormal romance. :)

I've posted today, too: My Town Monday: Home on the Ana at
http://flightsafancy.blogspot.com/

Wow! What an impressive history that building has! ... And you told it so well. Maybe you could get a job as a tour guide there :D

Love this post. Mine is up on my blog. Thanks for doing this!

I love your Monday stories, Travis.

I am just reading through a book called Master Class in Fiction, and it's section on description could've been written by you. You do that very well.

Love the building! And Lois Armstrong...what a history it has!!

Back again--after reading your post. What an intriguing place. I love the stories that make history sing!

Very interesting! What a beautiful building.
Sorry I haven't participated in MTM lately, but I've been busy w/other things & this weekend it just rained all weekend long.

Okay, I finally have my My Town Monday up at www.bofexler.blogspot.com.

How cool was that Travis! Did you enjoy doing the research for this post?

Great post! And seriously...you're going to use The Nat as a setting in a book, right?

I actually don't participate much with the my town monday thing - mostly because I live in an excruciatingly boring town.

That said, thanks to you, I just learned that i'm not the only blogger here! - LyzzyDee and I seem to be from the same town - cool huh?

Phew! How many individual buildings can claim so much history within their walls? And I didn't notice anything about additions built on or anything- that in itself is highly unusual.