I consider myself an intelligent fella. I am quite capable of following a string of logic and coming to an understanding, provided there is actual logic behind that said string.

For instance, I get the fact that the more corn we use for the production of ethanol, the less we have for the other, more traditional uses of those little golden kernels. I grass supply and demand economics. I buy the reasoning behind cattle feed going up and there for beef prices rising. I am not baffled that the Green Giant must charge more for his frozen packs of Nibblers. 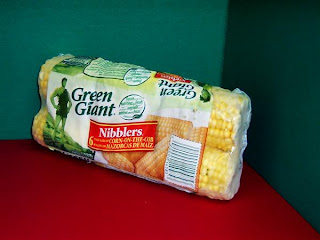 And, I even understand that the price of popcorn has exploded. But here is where things get greasier than your fingers after eating an entire bag of eight-dollar popped gold at the cinema.

That headline comes from a USA Today story that theater owners are planning to raise ticket prices by as much as 30% because of the escalating price of popcorn. According the the story, ticket prices are subsidized by the sale of concession stand goodies and the higher popcorn is the less people buy it so the less the theater makes. There are more holes in that theory than gray hairs in Indian Jones's stubble.

If I go the counter and see that a tub O' cholesterol now cost me more than Nick Nolte spends on bail money then I'm going to change my snacking selection. I'm just as happy munching on Sugar Babies and Junior Mints as I am on digging kernels of popcorn out of my teeth for the next few hours. As a fat guy I will go on record as saying I don't care what I eat. It's dark and my focus is on the screen. Give me chocolate covered ants, or deep fried grasshoppers and I'll probably never even notice unless the movie is total crap. I say the theater owners should get inventive. Tell the National Popcorn Society to go to hell and feed us something different. Unless your name is Orville Redenbacher you can probably sit through Pirates Of The Caribbean 18 -- The Curse of Jack's Kracken Bones without a barrel of butter drenched, air-infused corn. And if you can't well then you tell the kids there will be no Christmas this year and go ahead and break out the credit card at the concession stand.

This is the equivalent of strip clubs raising their cover prices because the cost of glitter has skyrocketed. I say we all put our foot down and start sneaking in bags of microwaved Pop Secret. Women use your purse, and guys, just cram it under your shirt. Sure you'll look fat and lumpy and you might even get a few grease stains on your clothes, but sacrifices have to be made. Besides, chicks still dug Elvis right up until the end and that smae desription could have been used to describe him.
Posted by Travis Erwin at 1:00 PM

Email ThisBlogThis!Share to TwitterShare to FacebookShare to Pinterest
Labels: Ranting

Can you say "NetFlix?"

Are you My Townin' this Monday? Or taking the day off to enjoy the town instead?

I don't know about where ticket prices where you are Travis, but by the time I'd done with the shake-down at the ticket counter, I never could afford popcorn anyway. ;-) It's 8 bucks a ticket at our local theatre.

At that price, I don't know how they're not making money even without the five dollar small popcorn and the three dollar small drink.

I'm not exaggerating the prices, either. It's sickening.

I am a NetFlixer and I rarely go to the movies and it is even rarer that I eat their high price fare. This post is more on theory. It just struck me as asinine to jack up ticket prices based on the popcorn market.

And yeah, I plan to get something up albeit nothing too spectacular.

I, too, have become a Netflixer and given up on a $100 family trip to the movies. It's ridiculous.

And seriously, does the movie theater industry really need to give consumers another reason to stay home with their DVDs? So not smart.

As if morons talking on their cell phones at the theatre wasn't bad enough to keep people from going.

I'm plannig of becoming a Netflixer as soon as I get rid of my DISH (next week!).

That is freaking ridiculous. Sounds like an excuse if I've ever heard one. Personally, I don't really care that much for movie popcorn but I've always been weird. And the crap has always been way too expensive. I agree, time to put our foot down.

This is, in the words of a friend of ours, bat-shit crazy. Time for a Jiffy-pop concession on a card table on the street! I seldom go to the movies---too pricey. I wait for DVD.
I will have a MTM post on the Peninsula Python this week (an a giveaway!). I actually already wrote it (this is NOT a trend).
Enjoy the weekend. It is finally sunny here in NE Ohio!

I don't make it to the theater very often, but cheapskate that I am, I've been known to smuggle a candy bar and a bottle of water in inside my purse or book bag. I gave up on the popcorn a long time ago since it's so expensive, and frankly, it's not that good anyway.

I actually don't like theatre popcorn. So, I guess I'll be paying more for ticket because of a snack I don't even like. :( That said, i really don't go to the movies very often. Maybe a few times a year.

Picture if you can, a little boy, about 3 years old....screaming loudly in the middle of a movie PICK MY TEETH!

To go to a movie here is expensive - 8 euros - (about 10$) for a ticket. It's 5 euros for the morning or for student and kid prices, but a movie and popcorn will set you back 15 bucks here. Might as well wait and buy the DVD.

It's amazing how many obscure reasons the producers of goods and the providers of services can find to raise prices.

"There was a severe windstorm in Malawi today. Economists warn that this could result in American consumers paying higher prices for baseball caps."

I agree... this is ridiculous. But I stopped going to movies long ago.

I'm so with you on this rant. We don't go to the movie theater as often anymore.

First, there really isn't all that much that gets us excited enough to pay the $12 each per ticket. Not when I can buy the DVD in 3 months for less than $20, or watch the PPV for $3.

And second, when there's something that has us excited enough to fork that cash over we tend to cruise right on past the concessions. We can have a better meal after the film for what it costs for snacks at the movies these days.

When we were kids my mom would sneak in huge pursefulls of candies, sodas & whatnot. At least there were some movies worth seeing back then!

And then add in the low level of quality Hollywwod produces.

I think the cost of movies is too high now, never mind what it will be -- and I love your descriptive phrasology!!!

I honestly don't remember the last time I went to the movie theater without getting half price tickets from the credit union. I also NEVER buy food products at the cinema. I'm a big proponent of the ever-so-classy let's sneak stuff in the giant purse.

Don't judge: I'm merely a school teacher. I'm not a highly paid postal employee like yourself :).

When I feel the need to be a victim of highway robbery, I merely go to a gas station and fill up my tank with gas. That does it for me . . .

A 30% increase because the price of corn has gone up? Give me a break. It already costs me more to get a bag of popcorn and a drink than the cost of the movie.

According to this page, the markup on a bag of popcorn is 500% or better (and I am pretty sure movie theatres have it on the better side - this site shows even better profit margins on popcorn - upto 93% or about 1400% markup).

I don't think the rising cost or corn kernels is driving ticket prices up 30%.

LOL! Rock on, T. Please let me know how the movie theater people take your advice.

Unitl then, I'll be sitting my own tub-o-lard on my couch with my big screen and hi-def. Screw 'em. AND their popcorn too!

We don't go to the movies very often - it costs too darn much! We have to budget it in. But of course, when you go with the kids, you can't NOT buy popcorn and candy.

But I'll be the first to admit that I've snuck food in to the theater in my big purse before. Heh.

I've been rocking the NetFlix for a while now, and quite frankly, you can't beat it! The girlfriend and I did go see the new Indiana Jones (disappointing) movie on Sunday, but only because both of us got in for $6ea.

As far as corn prices are concerned... I can't say I've been able to track them as easily as gas prices. It's easier to know what you're putting in your tank each time because it's the only thing on the bill. I haven't exactly been saving my grocery store receipts to see how much (if any?) corn has been going up.

Propecia is a one-a-day, FDA-approved, treatment for male pattern hair loss at the crown or in the middle of the scalp (androgenetic alopecia).