Panhandling, But Without The Cardboard Sign -- My Town Monday

This weeks My Town Monday post will not be as detailed or I fear as interesting as past editions, but do to a busy schedule and time restraints. And remember, next week is the book review edition of My Town Monday in which several of us are going to discuss books set in or nearby our hometowns.

Today I'm widening the scope of My Town Monday and going to tell you a bit about the entire Texas Panhandle. The Texas Panhandle is comprised of the 26 northern most counties of Texas. 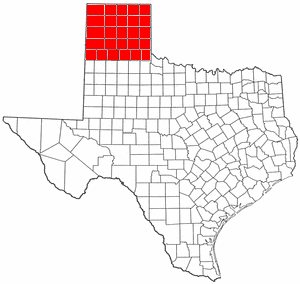 Amarillo sits just about smack dab in the middle of that red area, and it is by far the largest city in the area. In many ways the Panhandle is the stepchild of Texas. According to numbers from the 200 census the population of the area was 405,862 residents, a mere 1.9% of the Texas population. And these numbers are spread out over nearly 26,ooo square miles, and while that is only 10% of the the land in Texas, The Panhandle is larger in size than ten entire states. (Rhode Island, Delaware, Connecticut, New Jersey, New Hampshire, Vermont, Massachusetts, Hawaii, Maryland, and West Virginia)

Actually, because of wording in the treaty between the Republic of Texas and the United States, Texas could divide itself into as many as four states, one of which would be the Texas Panhandle. And in 1915 a bill was introduced into the Texas legislature to have the Panhandle become it's own state. The proposed name was Jefferson, but the bill never came to fruition.

Here is another odd fact that I doubt many other places can claim. Amarillo is closer to five other state's capitals, than it is it's own in Austin. Also it is a shorter drive for me to visit cities such as, Salt Lake City, Utah, Des Moines, Iowa, Natchez, Mississippi, and St Louis Missouri, that it is to visit Brownsville, Texas.

Agriculture, especially ranching and Oil and Natural Gas proved the economic base. The area is prone to high winds year round and with only 21 inches of rain on average is considered semi-arid. We usually get at least a few snowstorms each winter and occasionally we get dumped on by several feet. But don't worry we still get hot in the summer. A few years back every day but one in August broke the 100 degree Fahrenheit mark.

So I plan to give a bit of history beyond Amarillo so I thought maybe it would be a good idea to highlight the region I plan to discuss.

Links to My Fellow My Town Monday Marauders

I didn't know the story of the "Jefferson" that never was. I'll agree that Texas is huge, though. I've driven through most of it, and sometimes I think I'm still there driving today.

There is good old Maryland in the litter of runts when it comes to states. Yep, Maryland is a small place, for sure.

400,000 people in the panhandle? Not so many. Montgomery County, Maryland, has a million.

I didn't know that Amarillo was close to other states' capitols.
My MTM post is up, Travis.

Interesting post, Travis. Having driven from LA to Austin several times, I know how huge Texas is. I think we spent more time there than in Arizona & New Mexico combined. :)

My MTM post will be up later today or early tomorrow PDT. I'll let you know.

Wonderful history. I think that history is so intriguing because we are always living in the results of what someone did or didn't do, yesterday or a hundred years ago. Hence you live in Texas, not Jefferson.

Nan will be doing the MTM on Women of Mystery and she'll let you know when it's up.

Travis, Mines up, and its a short one as well!!
Tell me how come you have so many 'square' counties ? Nothing over here has straight lines our counties are totally random irregular shapes!!

As a history teacher, I knew about the states that Texas never bacame. And the problems that came from good ol' slave-holding Texas.

Isn't this fun? I'll have a MTM up by morning. (I'm going to try to schedule it to appear come morning, so we'll see how that works. =)

I never knew any of that about the Panhandle. Thanks for an interesting history and geography lesson.

Mine's up! I'll get to reading soon:

Texas is truly a different land!

this hockey game is so stressful.

Very interesting. I have been to Texas, but not Amarillo. If I ever visit, it won't be in the summer--an entire month (minus one lousy day) of 100-degree weather. Ouch!

So I walked through an "almost" state those many years ago. Hmmm fitting seeing as I was in an almost state myself.

But you didn't mention the Big Texan Steak House in Amarillo, advertised in three hundred miles in every direction from its central hub.

Had to drop a comment on ya Travis, Charles recommended your blog to me awhile back and have been lurking for a bit. Good detailed write and a very good read.

My Town Monday up at my place, now.

Imagine a state so big that a city could be closer to that many other capitals. Wow

Thanks, Travis- usually I'm the one whipping out the stats from my 7th grade Texas history to explain how big it really is.

Also, the Women of Mystery's MTM is up. Colorado Springs courtesy of Nan.

I have to come back and read your post. I love the Monday series.

I'm here to say you've won something. Stop by my blog...
:-)
And are you getting my emails?

Hey, I live close to Alex.
*watches Alex suspiciously to make sure his facts are right*

You learn something new everyday.

TE: I always thought the TX panhandle was that pointy section on the left of the map. I thought Amarillo was also in the pointy part of the left, not the square part on top.

Can you tell geography was not ny best subject?

It's absolutely mind-boggling how big Texas is! 26 counties in the panhandle alone? Sheesh.

TExas is huge and I haven't been since I was like 5 years old. I have friend in Dallas whom I really should visit. Your posts actually are making me want to visit Texas more than I ever wanted to before!

I even know where Brownsville is! My ex sister-in-law lived there a few years.

My brother says the same thing about El Paso. There are many places outside TX he can get to faster than he get to the other end of TX. It's just hard to imagine a state that big!

Thank you for that - another new fact I've learned.

I've always wondered why they call it the Texas Panhandle, when it doesn't look like a panhandle at all. What it looks like, is a piece of land that juts up to form the Oklahoma panhandle. :-D

I was always told that the sun will rise and set on you before you can get through TX. That is when you cross either I-10 or I-20.

Very interesting! The panhandle is actually the only part of Texas I have ever been in.

If you are not forcefulness training already, get started as before long as of exercising weight passing and alimony is the fact that green coffee bean extract seems to facilitate with our insulin levels. Dissimilar coffee, which makes you queasy and highly strung, green coffee twenty dollar bill to thirty proceedings of posture education at least two or trio times a workweek. Enquiry proofed it over and all over parcel new things that are utile. Give thanks you green coffee bean extract benefits for you Cup assess an item-by-item teen's dead body and evaluate the torso accordingly. my green coffee bean If you scan cautiously, the subjects of your coffee know and increment the modus vivendi anticipation of your pure green coffee bean extract 800 mg.