No Matter Where You're From -- A My Town Monday Post

Those words are not normally associated with Amarillo, but in the case of one of the city's native daughters they fit perfectly. 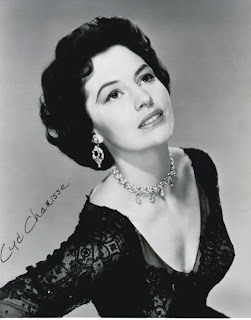 Tula Ellis Finklea entered the word on March 8th, 1922 in Amarillo, Texas. Her father was a jeweler here in town and he was also an ardent fan of ballet. His daughter was sickly child so after a bout of polio weakened her, Mr. Finklea enrolled her in a ballet class to help build back her strength.

It wasn't long until Tula, who actually went by Sid (a nickname one of her siblings bestowed on her by trying to pronounce sis) found herself studying under a pair of famous Russian teachers in Los Angeles. By fourteen she was touring Europe as a member of a famous Russian ballet troupe.

Within a few years she married, a man named Nico Charisse. The marriage didn't last long but she kept the last name for the remainder of her years. When WWII broke up her ballet troupe, Sid returned to LA and soon found herself dancing in the movies. Sid became Cyd under the suggestion of an MGM executive and the rest is as they say history.

Cyd Charisse passed away this past week, but what a life she led.

One of the few who ever danced with both Fred Astaire and Gene Kelly she appeared in more than forty movies over the years. Including Singing In The Rain, Brigadoon, Silk Stocking, and Meet Me in Las Vegas. Asked who was the better dancer, Astaire or Kelly, Cyd said this ...

“It’s like comparing apples and oranges. They’re both delicious."


Fred Astaire was quoted as saying this about Cyd,


The video is of her and Gene Kelly from Singing in the Rain.

My Fellow My Town Mondayers

Email ThisBlogThis!Share to TwitterShare to FacebookShare to Pinterest
Labels: Movies, My Town Monday

Thanks for this. I had forgotten all about those wonderful dance classics. I am presently in Florida babysitting a couple of my grandkids, but when I go home to New York next week, I'm going to take a few (Brigadoon tops the list) out of the library just for the fun of it.

My post is up, Travis. I'll be back to read yours.

Ah, Cyd Charisse. My husband thinks she was rather beautiful - I had no idea that she was from Texas!

Beautiful woman, beautiful story! I recognize her name, though not much else. Now I know I'd like to read up on her. :)

I wonder if she was given the name "Tula" because of the city Tula (Russia), or if it was simply a derivative of Tulia (Texas).

Sounds like she did live fully. Kudos to her mom for getting her started out right.

She was so gorgeous and there may never be a better pair of gams.

She was such a star, Her death made the main news over here!! my post is up !!

She was so beautiful - up to the very end. And so graceful to watch.

Thanks for the bio!

Interesting. I didn't know Cyd Charisse was from Amarillo. She was such a beautiful dancer.

I've posted a My Town Monday post, too, Travis. The best part is my photo of the full moon.

Travis, my post for My Town Monday will be up early tomorrow morning. I will return later to read yours.

Two awesome quotes! Thanks for sharing!

Cyd Charisse is from Texas? Who woulda thunk it? :)

Anyway, my Monday post is up. It's on Surf Diva Surfing School.

I always loved that name because it sounded so exotic. It's funny to learn now where "Cyd" really came from!

OMG, this is a bummer morning for news about celebrities. I just learned George Carlin passed away. And now this. (I don't watch much news, so I hadn't heard about Cyd Charisse.)

Thanks for the wonderful tribute to her. I loved her - especially in Brigadoon. She brought wonder and beauty to my world with her dancing.

The Titlewave gang and I are doing My Town Mondays. Our first post is up. It's about a wander I did through Westwood Village.

I love this idea of yours, btw.

Thanks for sharing this Travis. I didn't realize she had passed away this week, nor that she was from Amarillo!

My parents were married in Amarillo during WWII when my Dad was stationed there as an Army Medic.

Singing in the Rain is one of my all time faves, great post!

She was so much better than Ginger Rogers, or any of the other dancers...she was prefection..I loved to watch her and still do love to watch her..there was no one else like her and never will be...
plus i had a huge crush on her husband tony martin when i was a young girl...sigh*..such a loss..

How cool that you have such a talented star from your hometown. I loved her in Brigadoon.

Great post - thank you! She had the most gorgeous legs!

I did a my town post - but it was for Saturday night, lol, not Monday!

Forgot to mention that here in France her death was headline news, and they put 'Singing in the Rain' on that evening on one of the major channels, knocking off the regular program!

Terrific post, Travis!!!! Love the video clip from Singing in the Rain. When I saw the photo I remembered her from when I was a child, sitting with my grandmother watching these movies when they came to TV. Its sad to think these times are drifting away, but thank goodness we can all reminisce by watching these movies again.

I've got my post up now (it's still monday!) www.bofexler.blogspot.com

A lovely name for a lovely woman.
Travis, thanks you for the Roast.
My ass is glued to the chair most days.

Great post. The legs! OMG, she has the best legs I've ever seen...I always loved her grace.

I loved Cyd Charisse. How fortunate we are to have her forever in film.

Wow! Talk about a dancers body. As I sit here eating my fudge brownie I'm betting she never had one! LOL

And yes, she was a very graceful dancer.

Very nice story. Thanks for sharing it.

Beautiful lady - we've actually watched Singing in the Rain this week with the kids - great film.

I've strayed with my posts for the last couple of weeks -hope to back on track again soon.

Such beauty! I love the Fred Astaire quote, and the story of how she became “Cyd”.

You've inspired me to re-watch Singing in the Rain. :)

What a treat to watch... Now I have to go get the movie and see it again. It's been years.

Oh, and as to you "getting women"...it's the empathy you have toward the situation. I saw that, and I'm not certain why the other women didn't see it.