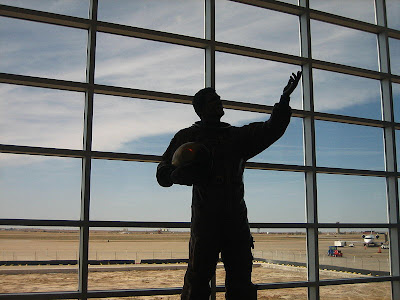 This statue stands in the main concourse of Amarillo's airports. It is there to honor this man. 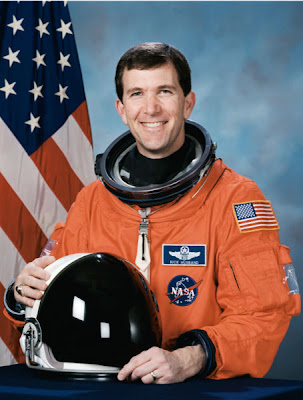 Rick Husband was born in Amarillo on July 12th, 1957. He attended Belmar Elementary, Crockett Junior High and Amarillo High School graduating in 1975. After college at Texas Tech University he entered the US Air Force as a commissioned officer where he became a test pilot and flew a variety of aircraft until being selected by NASA in 1994 to enter their training and evaluation program. In 1999 he fulfilled a life long dream and was among the Space Shuttle Discovery crew that made the first ever docking with the International Space Station.

January of 2003 Rick Husband left on his second space mission as Commander of STS-107. Sixteen day later he and his Columbia crew perished in the skies above Texas when their spacecraft disintegrated upon reentry.

Today the Amarillo airport's official name is is Rick Husband International Airport in honor of our local boy's accomplishments. His death as well as the others on Columbia was a great tragedy, but some soalce can be taken by the fact they died while living out their dream. May we all be so lucky when our time comes.

CHECK BACK HERE FOR POSTS ABOUT OTHER TOWNS

I am away from home but just put up a small post in which I mention one thought as to why MTM is so popular. And of course I gave you full credit.

What a great statue. I'm glad the airport is honoring Rick Husband that way. You all must be very proud of him. :)

I've posted a My Town Monday meme about Anaheim.

Great post, Travis. But, if we die doing what we love does that mean I'll go out by faceplanting on my laptop?

My MTM post will be up in a couple of hours, just tidying up historic points. Finally, the Battle of Queenston Heights. Please read the previous two posts from Saturday and Sunday as they contain necessary information for Monday's post.

I was so affected by the columbia tragedy that I wrote a poem about it.

They went across night,
Phaethons all,
stabbed like meteor flame
through the great silence
that sucked up the sound
of the engines.

Yet who could have known,
that not in cold black,
but in the wild blue,
higher than the mountains,
the angels of chaos
would steal their dream.

In the sound of fury,
against the hammering sky,
they rode the hand of god
until it released them
to fall like stars,
seven brave stars.

Oh, how sad. But how nice he's remembered. I have one up at 8 tomorrow.

After returning from a cruise, I watched the Columbia take off from Port Canaveral. It was thrilling. When we learned it disintegrated upon re-entry, I was devastated. Wonderful post.

No MTM from me this week. I'm bragging about my little sis instead.

Wonderful poem. Thanks so much for posting it for us.

Terrie - Thanks, I've kind of been wondering if MTM has about ran it's course but every time I think so it seems to gain new legs.

Linda - What about Mickey. We might not have him if not for Anaheim.

Britta- Good luck on the commute.

Barbara = I've been reading on google reader just haven't commented but I plan to.

Patti - I'll look for it in the morning.

Anti wife- I'll see what your sis is up to as soon as I can.

Reb - the view is endless.

My post is up. I have not read yours yet because I'm very tired but I did manage to put one up and am *very* glad I did. Thank you so much for starting this because it really has made me start seeing my state and where I visit as something more than I normally would!

i remember when that happened...and thinking oh jeez, are we (texas) going to get blamed for this ???
so sad..

Oh wow, how poignant. And what an excellent subject for a post. I always love your Monday posts, Travis. Thank you for doing them.

My post is up. We missed our flight back to San Diego, so this week's post is on....Niagara Falls.

Thanks Travis. I remember the day well.

Memories like this help to focus beyond the tragedy and to remember the individuals. I'm glad your town has honored him.

If you've never been to Kennedy Space Center to see the astronaut memorial, I highly recommend it. It's designed to reflect sunlight through carvings of astronaut's names, up into the sky. Just amazing.

Nice post. The shuttle launches from my backyard here in FL, so this was especially touching.

Travis, I love all the Space stuff, we have been to Kennedy Space centre a few times and I love it more than the likes of Disney. When I was at school at the time of Apollo (in the 60's and 70's) I collected every mission badge, every scrap of info about space. I can remember his mission. I have posted mine on a different theme this week!!

Those astronaut stories always hit me so hard. They're living a dream many people would like to experience, and then - ugh.
I love the statue, though!

Really nice post in honor of an adventurous man. I used to wonder if those who died doing what they love had the chance to relive a longer life doing anything else, would they make that change... somehow, I don't think most would.

Blows my mind how much history is in your town!

This was very cool.

No mention of Amarillo by Morning by George Strait. Come on that song put the town on the map. =) Cool story about Amarillo.

I stopped by for MTM and love the post. Great idea you've got here.

i will never forget that day. wow...

I still feel a childlike exhuberance around our space program. I often watch launches, EVA's and the like on TV, or more commonly on NASA.tv. One of the things that makes our nation great is our space program.

I can't wait for more brave souls - like Rick - to live their (and my) childhood dreams of traveling into orbit, back to the moon, and hopefully one day during my lifetime, to Mars.

Travis-- my MTM is finally up after almost getting eaten by blogger...

Nice post, too bad the guy had to be on that ill-fated mission.

Thanks for stopping by my blog. It's a pretty cool song. It's on the same album as HOME.

Have a great week! Great MTM!!

Come by and see the last installment of my mystery trip!
Cheers!