Nope, I'm not talking about Usain Bolt. After all this is a My Town Monday post and as far as I know, the Jamaican sprinter has absolutely no connection to Amarillo.

But the world's fastest athlete did participate in the Olympics. No, not in a track and field event, but rather the equestrian events. And I'm not talking about the dudes or dudettes in the squirrelly little hats. I'm talking about the horses, and a particular breed of horse at that.

The American Quarter Horse is an American horse breed that has been clocked at speeds up to 55 mph. The name derives from the Quarter Horse's ability to outrun all other breeds in races of a quarter mile or less. 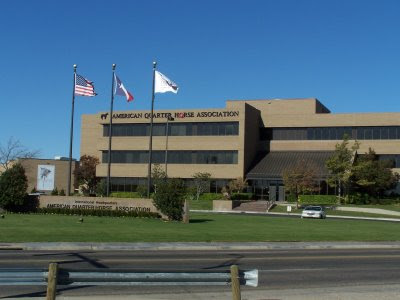 The All-American Futurity, held each year at Ruidoso downs in Ruidoso, New Mexico, is the Super Bowl of Quarter Horse races. With a purse slighter over two million dollars this past year the All-American had richer stakes than Thoroughbred's top event .. The Kentucky Derby.

Don't think the Quarter Horse is a one-dimensional athlete only suitable for racing. Far from it, the breed excels in the rodeo arena, on the ranch, at horse shows, as well as cutting and reining events, and just about any other equestrian event. It truly is a multisport athlete.

Sitting alongside the large three story building that house the registry and inner working of the association is a American Quarter Horse Museum and Hall Of Fame. I will be doing an entire post along with pictures from that facility sometime on the coming weeks. I even have an inside source that may provide a bit of inside knowledge about the museum.

The MY TOWN MONDAY BRETHREN

What a magnificent animal!

HOrses are such beautiful animals, and they are so fluid in running. Did you know that horses use their back muscles in running much more than humans do.

Can I still play MTM?!
/female spiritualist of no particular religious order :-)

My husband (a one-time cowboy) says that quarter horses are 'torque' - y "like a sport bike." (he works at Harley)
Great post, Travis.
Hope your ID is healing...
Aloha from Waikiki

Great post, Travis. I'd like to visit that museum some day. Horses are such beautiful and amazing animals. Sorry to hear your ID got stolen. Glad it's getting straightened out.

Linda, who's ashamed to admit she's also from Pennsylvania

PS No My Town Monday from me this week, but I think I've talked my friend Theresa Liu into joining us. I'll let you know when she posts. Her blog is called East Meets West at http://wwwwhitechinese.blogspot.com/

Why do you say that, Jenny Jill? We're a pretty diverse group. I think Travis meant brethren in the most universal sense possible since a lot of us are females. :)

Interesting sidelight.
I'll be there at 11:00 pm http://pattinase.blogspot.com

My post is up, Travis. I'll be back later to read and watch.

Thanks for the info on the quarter horses. They're beautiful animals. :)
As luck would have it, today's post would qualify as a MTM post, I think; http://lucidflora.blogspot.com/2008/11/louisiana-in-autumn-bird-news.html

There isn't anything quite like an American Quarter Horse. The good show horses come with fancy price tags. The horse in my profile photo is of that breed, Impressive bred, halter champion, western riding points, who went on to become a great 3-day eventer that Bruce Davidson spoke quite highly of.

When I rode this horse western, he could jump start fast enough to make my eyes tear up. That rear end muscle is something and so are their brains: smart. Too bright for some trainers, the Impressive bred horses tend to be intelligent like an Arabian horse. You can't mess with their heads or you'll end up with a monster who likes to fight back and laugh at you in the process.

Cloudia, your husband is perfectly correct. "Torque" is an excellent description.

Jenny, Travis means a group of people gathered together...that's us!! You gotta get used to his good ol' boy talk.

Hey Travis! Thanks for the MTM about my work! Just to let everyone who reads your blog know, the American Quarter Horse Association is a great place to work, and I hope that if any of you come to Amarillo, come visit me at the museum.

I hate to do this, but I do have one minor correction. We have over 5 million registered horses now! Woo Hoo!

Thanks for the love, Travis, and hubby says he'd love to meet you, too!

Have a great one!
Crys

My wife loved this post! Amazing animals for sure... Travis, I will have a MTM on Rayne tomorrow.

Fantastic post, T! I shared it with my SIL, who trains QHs.
My daughter has been riding them since she was 18 months old- they are truly a well rounded animal!

Awesome to know their connection to Amarillo. :)

Hope life looks up for you this week.

I just read your post from yesterday. YIKES!!! I hope this week is better.

"His hoofbeats are an echo on a timeless untamed freedom". I only wish that were true. One thing I have always loved about horses is their seemingly fierce/tame beauty.

They've been tamed, compromised and bred to our will. No more wild, protective herd stallions, it's life, and progress...but still, you get a true competitor like that with a rogue eye...love it!

Awesome! Amarillo is just full of surprises. (Mostly I see only the bits on the highway heading into Colorado).

Always interested to learn more about horses, and I didn't know the connection between QH's and Amarillo. Now I do! I'm a Tennessee Walking fan myself, because it isn't how fast you go, it's how you move.

Oh I love horses! Great post.
I have MTM post for you about Montgomery Alabama and the civil rights movement. Thanks!

Horses are such amazing animals. I haven't ridden in so long...now I want to!! Great post.

The Quarter Horse is a truly magnificent breed. It amazes me that without any work to bulk them up they all look like steroid abusers. Really muscular horses, but agile.

I think that there are only 3 truly American breeds, the Morgan, Quarter Horse and Apaloosa.

No, wait! I forgot the plantation horse, the Tennessee Walking horse, and trotter/pacer and probably some more.

This is a great MTM post, Travis! I love horses, but was always frustrated by them as a kid because I absolutely cannot draw a horse to save my life, and I'm not bad when it comes to a little freehand sketching.

I'll have to show your post to my horse-loving daughter! Okay, my MTM post if FINALLY up. I know, I know. No "A" for me this week due to tardiness!

Hi again Travis- I had quite a lot of trouble posting a video. Then I relented and asked my teenager. So my post is up, such that it is. Fun to learn something new though. It's funny you chose an animal for your post too...lol. ~Karen

This was awesome, Travis. Incidentally, I've been thru Amarillo on a Xcountry trip from NYC to LA and I found it to be a fun town.

Figures I should miss the horse museum!

Awesome post! can't wait to hear more about he museum too!

Now there is something that my husband would understand!! Just a shame that whenever her puts his money on any of them that they become three legged losers!!!
Great post!