... and it is the Alibates Flint Quarries National Monument located 35 miles north of Amarillo.

I'm going to cheat this week by copying from the information on the National Park Service website, which can be found here. The god news behind my lazy MTM post is that I've captured my writing muse and put her in a mason jar. Yeah I punched enough holes in the lid so she can breath, but until she escapes I'm going to keep hard at work my creative non-fiction project.

Imagine yourself standing where an ancient civilization once lived, surrounded by colorful flint that was used to make weapons and tools. Alibates flint is a multi-colored stone with the ability to hold a sharp edge. Alibates flint was highly prized and traded throughout much of North America. 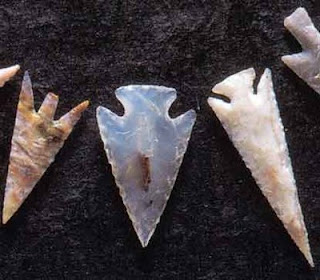 Archeological traces of prehistoric Indians homes, workshops, and campsites dot the entire Canadian River region of the Texas Panhandle but few sites are as dramatic as Alibates Flint Quarries. Actually an agatized, or silicafied dolomite, the flint is distinctive for its many bright colors. This flint comes from a 10-square mile area around the monument but most is concentrated on about 60 acres atop a mesa in the heart of the 1,000 acre monument. More than 700 hundred quarries exist where this flint was dug out by hand. The quarries today are usually round ovals about six or more feet in diameter with depressions in the center. As soil washes in by rain, and blown in by wind, it fills the once four to eight foot deep holes. Unweathered flint was obtained by digging a foot or more below the surface. The flint bearing dolomite layers are up to eight feet thick. Tools made from Alibates Flint have been found in many places in the Great Plains and Southwest. It's use dates from 13,000 years ago to about 1870. Between 1150 and 1450, Indians identified as the Plains Village Indians, ancestors of Caddo, Pawnee and Wichita Indians, lived here in large permanent villages and smaller, outlying farming and gathering communities. Villages were built of rock-slab houses from one to 100 rooms. Most were single-unit dwellings although some rooms were connected. Architecture of this period featured rectangular, semi-circular rooms with funneled entranceways and stone enclosures. It is believed that extensive severe drought, coupled with raids from aggressive tribes, probably Apache, from the west drove these indians out of this region by the end of the 15th century. 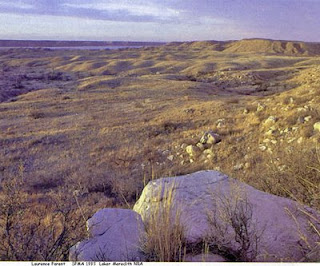 Alibates Flint Quarries National Monument offer tours year round by reservation only. Tours usually go at 10:00 AM and 2:00 PM. Extreme weather conditions such as 100 degree temperatures, lightning, tornadoes, etc. may cause tours to be canceled on short notice. Reservations may be made by calling Park Headquarters, Monday through Friday, 8:00 AM - 4:30 PM, at (806) 857-3151 or writing the Superintendent, Alibates Flint Quarries National Monument, P.O. Box 1460, Fritch, Texas 79036. 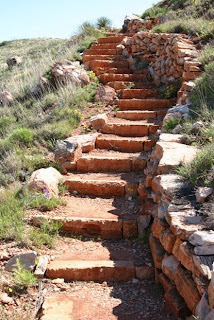 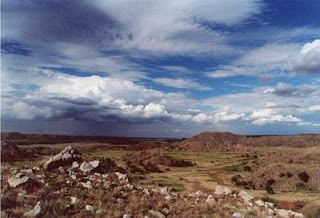 For More My Town Monday posts check back as I add links below.
.
Jenn Jilks turns her focus away from Muskoka, Canada this week and instead looks down under.
Barrie Summy stopes to smell the flowers in San Diego California.
Chris takes us this week on a short trip to China and to Shenzhen's Civic Centre and Museum of history.
Debra fights cabin fever in Village of Peninsula, Ohio.
Patti Abbott looks at the disappearance of Jimmy Hoffa.
Clair Dickson takes us on a stroll through Brighton, Michigan.
Reb chirps away about Alberta Canada.
Mary plans ahead for Olmsted Falls, Ohio's heritage day.
Huddlekay sings her praise for one of Amarillo, Texas's own.
Paul Brazill is helping to round up roofing bandits in Hartlepool, England.
Barbara Martin highlights the life of legendary John Ware from Alberta, Canada.
Passage of Woman carves out a post about Kingston, Tennessee.
Junosmom posts about the economy of her small Kentucky town.
Terrie Farley Moran issleuthing around down in Deerfield Beach, Florida.
J Winter takes a royal look at Cincinnati, Ohio's moniker.
Linda McLaughlin lays down some track from California on the proposed "Sin Express,"
Posted by Travis Erwin at 12:02 AM

I love the arrowheads, Travis. I always thought the Alamo was a National Monument. Shows how much I don't know.

You have to place some netting over the air holes. You did know that, right? Just until she's trained -- or until you've written enough she wants to stay around for a while. Glad to hear you've trapped one of those darlings. Can't wait for you to share.

When I was younger I was fascinated by arrow-heards and sometimes spent hours in search for them in the forest behind my parent's home.

Like Teresa, I always thought the Alamo was a monument too.

Keep writing while it comes!!

Very interesting! And may your muse keep on, uh, musing! :)

I think I remember reading somewhere that Muse's like bourbon laced with honey . . . and a little thistle down upon which to lie her wee head.

Just watch out for the stinger on her backside.

Very interesting and pretty area. So glad you've been able to bottle up your muse. Hang on to her while you can. I haven't seen mine in quite a while. Slippery little devils, aren't they?

I have a MTM post on the proposed "Sin Express" train from Disneyland to Las Vegas scheduled for posting at midnight tonight.

Glad you are getting a bite on your writing, Travis. Go Boy!
Nice post, esp the arrow heads.
Aloha!

Excuse me sir but I do believe that is *my* muse you have so callously captured in your jar. Could you please send her back to Iowa? I'm sure she misses the frigid temperatures and my roomy mind. Please? Tell her I will make her bed for her all nice and comfy. :)

This week, a short trip trip into China into Shenzhen's Civic Centre and the Shenzhen Museum of History...

I use to collect arrowheads and now I'm wondering what I did with them.

I love arrowheads, too. Finding one would be a real treat.

My post is up,Travis. As always, I shall return to read.

I am ashamed to admit that I live here, too, and have never gone out to Alibates. :-( I will have to remedy that.

I hope your muse is shining in that jar like a lightning bug! Write like crazy while she's buzzing around in there. Can't wait to hear what this project is about!

I would've guessed Tha Alamo, too. I'm sure it's a historic something or other.

When I lived in the area, Oklahoma was more known for its arrowheads. Good to see they got around.

Love the arrowheads, I also like the warning that temperatures of 100 degrees would be cause to have a tour cancelled....um, yeah!

Mine is up. Good luck with your muse.

Boy, Texas has a lot to show off!

I have an MTM going up at about 8:30 AM Eastern Time over on Women of Mystery.

Hey I actually have an MTM this week. Are you proud? Well its a quasi-MTM anyway....

Arrowheads are cool. None in Hartlepool. But cowboys? Yes. I've just posted a MTM. Cheers.

My MTM post is finally up, and I'll come back when my eyes aren't so tired and fully read your post.

Wow, the Alibates information is very cool indeed! I didn't know any of that. Thanks!

Good morning, Travis. I have written about what the economy might do to our small town.

I love the arrowheads. It gave me an idea for writing next week. Thank you for the jump start!

Why don't you set one of your novels in Amarillo?
You have a lot of stuff about a place that's unfamiliar to most readers

Wow! 13,000 years ago? It amazes me that things from so long ago are still around, but the things that are built now only last a few years.

I am SO glad you captured that Muse! Can't wait to see (or hear about) what she has you writing!

Hey you! Congrats on the new house! What a relief...! I have thought of you and your family often through that horrible day! I just popped in to say I am back and have missed you to spy The My town mOnday..add me if you want I have something about our Governors mansion!
Hugs,
~Robyn

Very interesting fact about the great state of Texas. And was that a Freudian slip when you say god news instead of good news. Or maybe god did help you out and find that voice. Just saying. Hope all is well.

Hey Travis! You might want to check out this book review (Middle Grade/pirates):
http://pjhoover.blogspot.com/2009/03/book-review-club-dust-of-100-dogs-by-s.html

Great post. I remember hunting for arrowheads near the Indian Mounds in Georgia near my house. Pretty cool Travis.

I'll have to check how far this is from Austin! Sounds like a nice summer trip.

This was great...and I am loving looking at all the My Town Monday links.

btw...we celebrated Texas Independence Day on Monday. We're probably the only people in Alabama who do!! :-)

Glad to see you captured that muse, Travis!