My six year old suddenly has a new hobby. Writing books or maybe I should say creating books since they are heavy on pictures and light on words. Mostly there are about animals though he has started one about pirates.

The first as was all about animals. Here are a few shots. 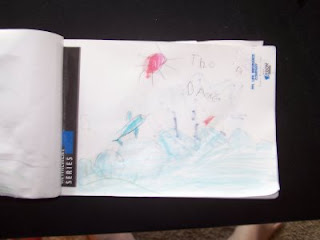 His caption reads The Dolphin, or at least it does by his idea of phonics.

Then there is his turkey 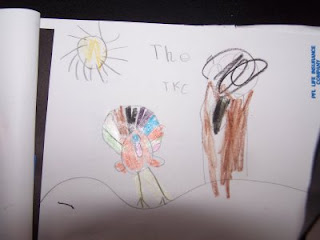 As a sequel to the animal book he made one all about his favorite animal ... sharks. Here is my favorite page. 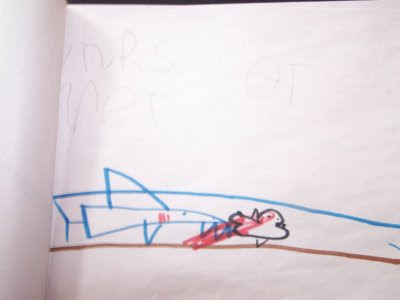 His penciled words are hard to read in the picture but it reads Shrks et met which translates to Sharks eat meat.

See he's like me in more ways than one. A writer and a carnivore at heart.

I wish i could find his pirate book to show you some of those pages but like a true writer he doesn't like anyone to see the early stages. actually he's probably just hidden his notebook so his brother doesn't use any pages, but nevertheless I can't find it.

I am proud to see him working so hard on his books but I got quit the chuckle the other morning. he got up early, a rarity for him, so that he could work on his book before school but when it came time to leave he hadn't gotten done as much as he wanted.

I made him put away his crayons and work in progress and he immediately started crying. through big, tear-filled eyes he whimpered, "But I don't wanna go to school today. I just wanna stay home and work on my book."

As I grabbed my keys to head off to work I simply said, "Me too buddy. Me too."
Posted by Travis Erwin at 10:55 AM

Reminds me of how much fun I had drawing when I was a child.

Travis, that is so cute.

A suggestion, from a retired teacher: to help your son offer to scribe for him. All of us have a lot to say, and expressive language in kids exceeds their written language skills.
This will help him with the project and give you some quality time.

I did a lot of peer tutoring, and we used this strategy (Reading/Writing Buddies), with a SK class my friend taught, and my gr. 4/5 class.

We had the 'big' kids scribe for the younger ones and wrote phenomenal stories!

They definitely pick up even the smallest of things, don't they? My 6yo (girl) loves to write and draw, too, and it's very exciting!

Make sure you hold on to his first books. :)

A big ol' chip, for sure. I love the shrks et met picture, he nailed the essentials: predator, prey, blood.

One of my nephews once wrote a poorly spelled story about a whirlwind that wiped out a town. It was called "Tronado Toon."

My daughter was in 2nd grade when she started to type on the computer and created a story, complete with a drawing, of BIG CARNAZZO, LITTLE CARNAZZO.

I wish I had saved it!

I do have the cutest boys in all of the world...I know i am the mommy and wife, but i must say they are perfect. It is a good idea to scribe, however we are not allowed to touch the book we have to look at it with him. Travis is in loads of trouble if Z finds out his daddy messed with his book!

That is really cute. Reminds us of why we have to be careful what we do when they can see us. Love the shark page. Sharks do indeed eat meat. Have you talked to him about a possible collaboration? Hmm.

My kids all wrote books when they were little. I've confiscated them as they've moved away. They are my treasures. Now as young adults they all still tell stories in their own way -- one is a screenwriter, another writes computer games, and the third tell stories through photography. Their current stories are my treasures too.

Oh, me too!!! That's adorable. But maybe he'll get his start early and not have to "go to work" when he's an adult. Maybe he'll get to stay home and work on his book.

I keep telling my daughter that. She is 14 and writes so well it makes me nuts because she doesn't have the patience to work on it. She doesn't have the polishing knowledge, but she has more RAW talent at her age than I do at 42. I keep telling her if she'd just do something with it, she could make something of herself early. Deaf ears...deaf ears.

Whatever you do, don't let any of those books get lost. A couple weeks ago I posted my own first book, written when I was just about his age. I am so happy to still have it.

My oldest is going to be 17 next month, and I still have some of his books from that age.

You have the absolute cutest kids! And I think it is so cool that he is writing books, too. Thanks for the visit, and hubby and I can't wait to see you and your awesome wife!

Awesome! I esp. enjoyed that shrk's et met. Keep these, they'll be fun to look at later.

One of the best things a teacher ever said to my grandson was, "I'll never have such a good writer as you in my class." Things like that stay with a person. It's a constant reminder to me to TELL people when they are doing something great. It costs nothing, but people are stingy with compliments. I'm so proud of your son and for you to be his example.

I LOVED it!! Thanks for sharing that. It just warmed my heart!

Well, why I am not surprised at all? He might get it from his DAD. :)

Wow, cool.
This reminds me of my first hand drawn "book."
Thanks for the memory, Travis

My nephew also has a fascination with sharks. One of his favorite DVDs is an educational box set containing five DVDs about sharks.

This is very cool! My son made a few of those books too when he was little. I still have them.

Your kid and my kid would love each other. She also writes books and illustrates!
Your son has some serious talent! :)

That is so sweet. It must feel great to have him share your passion.

Oh, that's so cute. I can just see those big, tear-filled eyes. Thanks for sharing this with us, Travis.

My daughter is a storyteller at heart, from elaborate drawings to even more elaborate lies.

I have a collection of books that my children have done over the years and they are great to look back on. The funniest one was one made by Carl about hoppy the rabbit, Carl was in reception so around 5 years old. He told a very graphic tale about why the rabbit was called Hoppy, sadly it had something to do with having his leg traumatically amputated, which he reproduced in glorious technicolour!!! He has turned out alright though!!!!

Great post. One of these days maybe he will illustrate one of your novels.
Hey you could write a children's book and let him illustrate it now.

This is definitely sweet. I think Jenn Jilks has a great idea. My 6 y.o. loves to write her own stories instead of reading and writing about the story as she is supposed to for class so I tell her to do both. It amazes me the imagination and the freedom they have to just write about anything,even when we think it does't make sense.

Future novelist. Please tell him I enjoyed reading his book!

Awwwwwww, that's so sweet. As an artist from an early age, myself, I've been in that exact same situation. I wish him much success (& with parental support, I'm sure he'll find it!)

That is too cute. I love that shark picture! Lots of little kids don't understand the connection between animals and food at that age. (Well, that might be a city kid thing). He's very wise to get that connection.

And I agree. Sometimes it is hard to head off to work when all you want to do is write.

that is so adorable. I wanna read his pirate book!!!

Ha! You're a terrible father for making him go to school! I would have said, look, you can stay home but by the end of the day you need to at least have subd your query to twenty agents!