Do you read FailBlog.org? If not you should. It is hilarious. Until now I've resisted the urge to copy and past things from failblog to share with y'all but this one begs to be commented upon. 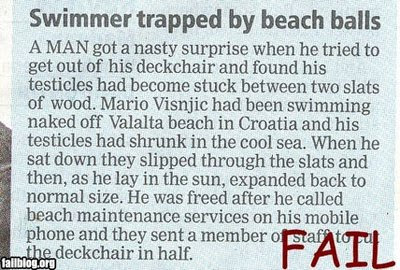 Where o' where shall I start?

Maybe with his decision to skinny dip in big blue. Mario. Dude. Have you never seen all the stuff that lives in the ocean?

Crabs and lobsters with big claws just made for grabbing a hold of your junk.

Eels, jellyfish, and sting rays are lurking below the surface all too eager to zap Mr. Squid. Haven't you ever heard of the Crocodile Hunter?

Sharks, barracudas, and a myriad of other toothy fish are swimming about and everyone of them would like a worm to snack on.

Yep, Mario swimming in the ocean while freeing willie was mistake number one. Oh, but you weren't punished for it, so you hop out of the chilly water and despite being the victim of shrinkage you don't feel the need to don clothes. I'll applaud you for the self-confidence as most dudes prefer to only be seen at their best, but Mario wasn't content to simply let little Luigi go about pale and shriveled. No he decided to camp out on a slatted deckchair. In the warm sun.

Now I've had a few nasty sunburns in my day so no way am I going to dangle my bits about and risk becoming the subject for a new version of chestnuts roasting on an open fire. Not to mention the long term chance of skin cancer. A bit of melanoma on the ol' Manitoba would not be a pretty sight.

And then he dozed off. I know lots of people sleep in the nude, but doing it in the safety and confines of your own bedroom is one thing. Hanging it all out at the beach while you are unconscious is another. Ants, bees, biting flies, stray dogs, kids with a Frisbee, the list of hazards are endless. As Mario's fate proves it's simply not healthy to let things roll around unattended.

And man oh man would I have hated to be on that maintenance crew who had to come saw the chair in half. I'm pretty sure that was not in their official job description. And poor, poor Mario. No one since Bill Buckner, has done as poor a ball handling job, but I do feel a bit of sympathy for Mario. Any man with a set of his own would have to. Having you guys hanging about in the presence of a whirling saw blade is far from a situation any man wants to find himself in.
Posted by Travis Erwin at 12:13 AM

Email ThisBlogThis!Share to TwitterShare to FacebookShare to Pinterest
Labels: a strange world, Rambling

I like how you took the time to put up visual pets. :D

Failblog is the bestest.

I didn't know nuts shrink in cold water and expand in hot air. I learned something new today. Thanks!

While they may not have liked it, it was good that maintenance was there to give Mario a hand.

Hmmm....not to burst anyone's bubble, but this story has been floating around the 'net for a couple of years now (got a few e-mails forward to me about it).

Oh, I love Fail blog! And this one is just a classic!

There is virtue in modesty! I would never have Mario's problem, not in a million years!

Oh my God, you have such a way with words! I'm sitting here laughing at all the delightful, hilarious and imaginative expressions you've used.

Wow, how low do your balls have to hang to be able to even have this problem? Sheesh!

Oh, that definitely gave me a chuckle.

Most people prefer to use a towel to lie on.

I laughed so hard i started choking!!!! Especially about the shrinkage!!! LOL LOL Thanks so much for sharing this.

Guess he won't ever forget that vacation.

Maybe he learned his lesson? The rest of us certainly did.

OMG! That is truly a FAIL.

You are too funny and mario is too dumb.

Great descriptions and thanks for the laugh!

this guy would be a candidate for the Darwin Award!

OH. MY. GOODNESS. That is freakin' hilarious!

Why did they cut the chair in half? Why not just carry him into the water and let the boys shrink again? Or spray them with cold water?

ROFL! I love imagining the second scenario. The squirming, the screaming...

OMG! That is *hilarious*. Massive Fail. Thanks for sharing.

OMG, hilarious! Thanks for brightening this otherwise dreary day.

You live in the Panhandle! How interesting. I've driven through there, and had a U-Haul break down there once (when it hit a load of brush that fell off a truck). Did you know that Bonnie and Clyde had a bad wreck one night in the Panhandle? Anyway, you're in an area about which I have a lot of curiosity but very little knowledge.

I wouldn't worry too much about the maintenance crew. It sounds to me as if Mario was nuts over them. ;)

I'll bet that is a lesson he won't soon forget! Love the photos you included to illustrate your points ;)

Travis, for the story of Bonnie and Clydes' Panhandle car wreck, check out the memoir of Blanch Barrow. Bonnie was nearly killed in that crash.

That was just too funny! You definitely have a good way with words!

Thanks for stopping by my blog and commenting!

that guy will think twice before he does that again, I hope.
I'd hate to see his tan lines...

LOL! Found you on Beth's blog!

Hahahahahaha (although I suspect I'd feel different if I possessed different anatomy)!!!!!!!!! I especially enjoyed your sympathy for the maintenance crew. Thanks for sharing : )

That was funny!!! Thanks for the laugh. You have too much time on your hands my friend!!!!

I don't even know where to begin commenting. This is just so funny and tragic all at the same time. Thanks for sharing.

You make me feel like wearing a wetsuit at all times is a good idea.

I was having a serious laughing fit while reading this.....hillarious. Must show this to Jack.
Your visuals are too much!!
Must check out Failblog.
Thanks for the laugh!

OMG, that is so funny. I only hope it's true and not an urban myth.

I seriously don't get what you guys see in your bits. I mean, really. Gross.

HA this is great thanks for sharing, I have never heard of this blog I will have to start reading it

Travis, you are KILLING me! I don't believe I've ever seen as many creative terms for a man's junk as you've got here. Well done. Er... good job.

Janet has it right. My first thought was, "Don't they have fire extinguishers over there? Or ice?" But cold water would work, too. Loved the pictures.

And now WordPress claims I don't own my identity. Someone stole my fake name??

Also laughing my ass off. Funny story but even funnier take on it.

I loved this post, just haven't had time to comment. I showed it to a friend, too, and she almost fell on the floor laughing. Your comments and little photos were priceless!!!