A lot of people think writing is hard and it can be at times, but in my case writing is the easy part.

Spend hour after hour nurturing something and see how attached you come to be. I don't care if it's tiny little tree you plant, water, and fertilize in your backyard, a blank canvas that you slowly bring to life with your pallet, or a stack of computer paper that you transform into a manuscript, when you pour yourself into it it becomes much more than an inanimate object.

All writers have taken their turn on the roller coaster, myself included. The ones that get published are the ones that can handle the stomach churning drops. Sure, they may step away from the ride , they may even hurl up their milk duds, but they are not afraid to get back on, time after time until they conquer that evil roller coaster.

That brings us to the point where I tell you about a couple of my friends. I've never met Stephen Parrish and Erica Orloff but I'm proud to call both friend. I've read their 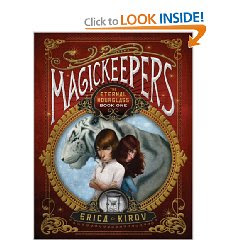 blogs for several years now. They also came to came to my family's rescue when we needed it most this past January. They organized the phenomenal fundraiser that so many of you contributed to. For that they will always have my gratitude, but it was their talent as writers that first drew me to become regulars on their blogs and it is that talent that makes me admire them most.

Erica has been riding the coaster a long time and her talent has shown through in the many books she has published over the years. This Friday her latest comes out and I for one will be hitting my local store to pick up a copy. Magickeepers is the first installment in her new young adult series and it is being released under the pen name of Erica Kirov.

Stephen has been battling for a while and this week he too conquered the beast. Stop by his blog and congratulate him that his first novel Adamant Stone has been bought by mystery/suspense imprint Midnight Ink.

Meanwhile I will keep battling. This past week I received my first ever review. For making the top 500 of the amazon contest I "won" a publishers weekly review/ Actually ti wasn't as bad as I feared it might. after all if the review had been all rainbows and glitter I would have made the top 100. Anyway, I thought I'd share it with y'all, warts and all.

With a single exception, men are louts in this fitfully comic saga of serial sexual harassment and one woman's revenge set in a small-town Oklahoma Ford dealership in the late 1990s. The good guy is 37-year-old top salesman Hank, who started washing cars on the lot when he was 16. Remaining loyal to his increasingly shrewish high school sweetheart, he opts out of a scurrilous scheme by new owner Junior -- the sleazy son of the deceased, revered founder -- to bet on who can first bed a succession of busty receptionists. Hank's disdain for the testosterone-powered shenanigans bonds him with strait-laced Fiona, who handles the dealership's finances and with whom he shares his fantasy of one day visiting the islands of the Caribbean, despite his wife’s preference to visit "the biggest mall in all of America." The novel's emphasis on bumptious men behaving badly eventually palls, but author's rendition of questionable car lot sales ploys plays into perceived car-salesman stereotypes with plausible humor, and the story's resolution is satisfying.

And then today I received a rejection on the full manuscript that said much the same thing but in a very different way. Sure I feel a bit nauseous, but I've been here before and already my mind is spinning. I have a few ideas for revision. For bolstering that palling plot and shoring up the sagging middle. I've also been making steady progress on the feedstore memoirs so it won't be long until I'm back on the ride, pulling down that lap bar and gearing up for one hell of a ride.
Posted by Travis Erwin at 12:25 AM

Ups and downs is the only way to describe it. I'm up at the moment with some good things happening, but during the time the good stuff was going on I still had two rejections on stories. I think one does get a bit more philosophical eventually about the ups and downs. I seem to have.

Congrats to your friends.

I admire your tenacity. I wish I had that kind of staying power. Personally I'm getting very burnt out on the whole art thing & I've been considering quitting...again...for the 3rd & last time.
Best to you, as always!

I think you are wonderful and you are going to do well. I am glad I get to go on the ride with you. It makes life what it is. We will make it and we will want to go on the ride again and again. That is what it is all about you get off and then you run back to get in line. Life would be boring if you just sat at the bottom and waved at the people on the ride!!!

Wow, thanks for being so honest, Travis. Most people would not have posted the review. Don't give up hope, ever!

Hang in there, bub. Just as you support others with their talents, we support you and yours.

Dang. Elevators make me queasy and now you tell me I've gotta ride a coaster? Last time I rode one I got stuck at the top. What are the odds of that happening twice in a lifetime? Stuck at the top of the publishing roller coaster -- one can wish.

PS -- I didn't think that was such a bad review. I've seen MUCH worse.

OH, and hang onto that wife of yours. She's a keeper. Loved her encouraging comment.

Travis, you are an amazing writer. You also have a great support system. This too shall pass, and I know your books will find the perfect home.

This is all so true.

Oh no! I'm sorry. But one day, someone is going to love your book and you WILL be published. I have no doubt in that.

But man, I wouldn't make a good writer because i could NOT take criticism that well.

Good point. Yes, the writing part of writing does seem like the easier part these days. I'm glad to hear you are continuing to push forward! Thanks for posting the reviews too. They are insightful and there is definitely a lot of positivity there.

I'm a fairly recent follower of yours, but you have alot to admire. Writing doesn't come as easily for me as it does for you evidently, but obviously you're working it in the right way. Great attitude too. Must feel great to get a review.

This whole writing lark is a roller coaster all right. I've come pretty close to calling it quits myself. Sometimes I wonder why I keep plugging away at something after so many rejections. But the great thing about this wild ride is that so many other people are working so hard at it, going through the same soul-destroying process -- and supporting one another through it all. That makes a lot of the misery much easier to bear.

Good for you, and congratulations to your friends!

Hey Travis:
It's a helluva ride, but writers are . . . well, writers. So it's what we do--ups, downs, and all. Thanks for the shout-out . . . and can't wait to see your name on a spine one of the days--you've got Texas-sized talent.
E

Personally, my review of that crap review is that the review sucked. It barely made sense! (Much like this comment!)
But seriously - keep your chin up - because you are a great writer, and you'll get there - soon!!!!

Sorry about the rejection, but glad to see you're going to get back on the roller coaster. At least you've gotten some good solid feedback you can work with.

I too am sorry for the rejection, but I was happy to read that you have friends who came through for you when you needed them.

getting back on the bike is difficult, but, satisfying in the end. I believe you will finally find a publisher.

Hang in there. It'll happen and when it does, you'll be so proud because you'll remember all the work involved.

I, too, am in it for the long ride. Sometimes it's bumpy and sometimes it rains. But sometimes there are wildflowers blooming and the sun shines like nothing can ever go wrong. Sorry on the full R. You'll make it!

What I see in that review is a lot of information you can use. That's good news, not bad.

I'm reminded of Bernard Cornwell, who once said of his Sharpe books that if things started to get boring he could always have 30,000 Frenchmen march over the horizon. Granted you may not have the same option, but maybe you just need the Travis equivalent of 30,000 Frenchmen.

One word
One rung
one day,
Travis my friend!!
We will all continue to enjoy and learn from your adventures. Aloha

From what I understand it never goes away either. Or I should say one never really gets used to the ups and downs and unless you're JK Rowling I think there will always be downs. Hang on tight!

Hang in, hang on, prevail.

Why do I continually show up right after SEXY from Taiwan?

Know the feeling - when you get on an up you soon come crashing back down. Good new for your friends though and I'll stop by their blogs right this minute.

I think your submission was pretty good. But I'm not a critic or an agent..

Travis, I hope you're able to pull helpful bits from the review/rejection. It sounds like you're already partway there. Good luck. :)

I love this post. You speak/write for writers everywhere. Or, at least, for this writer.
Carry on! That's what we all learn to do in order to survive those rejections...

That's awesome about your blog-buddies :)

At least you got similar comments back. You can focus your efforts on those areas. You have such tremendous talent, I'm sure you will be posting your own success story here shortly.

And the part about what writing is easier than made me laugh :)