Lions And Tigers And Bears, Oh My ... A My Town Monday Post,

The Amarillo Storyland Zoo opened in 1955 and for the next 30+ years the facility could be described in one word ... embarrassing.

Luckily, that is changing. First let me tell you what the zoo used to be. I'd hoped to find some old photos to go along with my descriptions and memories but I wasn't able to find any.

The zoo I knew as a kid, we are talking late seventies here was called Storyland Zoo. The entrance was a dark dingy fake cave filled with poorly rendered Snow White and the Seven Dwarfs scenes. Admission was free but as a kid I remember it being kind of damp and scary. And what it had to do with animals is beyond me.

Once inside the zoo was filled mostly with animals anyone could see by driving the back roads in and around Amarillo. There were deer, in a tiny little pen with a gingerbread-esque house. Rabbits and prairie dogs in a large dirt enclosure. Goats, donkeys, and aoudad sheep in cages backed by a false fronted western town, bobcats and coyotes, longhorn cattle and peacocks, and some big goldfish swam in a pond located in the mouth of a large concrete whale.

As a kid the only things I enjoyed were the dome cage full of spider monkeys and the large western fort themed playground. Once upon a time the zoo had an elephant but it outgrew it's small pen and was gone before I was old enough to remember any pachyderms.

The cages were small, the smell was bad, and as I said the Amarillo Storyland Zoo of yesteryear was nothing more than an embarrassment.

And while the Amarillo Zoo, (storyland was dropped from the name a number of years ago) is still far from being comparable to top of the line zoos in larger cities it has done a nice job of working with the resources at hand and improving little by little each year.

The spider monkeys remain, but these days they have a, clean open island environment to swing about on trees and and enjoy the sunshine. 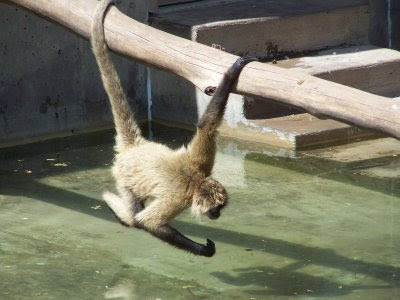 The old elephant pen was combined with the goose and duck pond to create a large spacious area for the black bears. 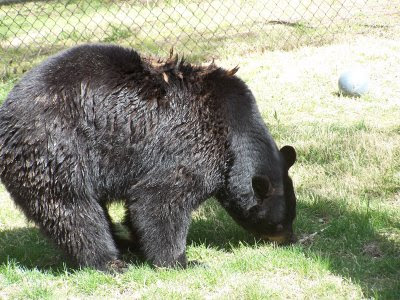 An interesting side note is that these bears once were the mascot for Baylor College.

A couple of years back the zoo, built a nice big cat pavilion and added three lions a male and two females. 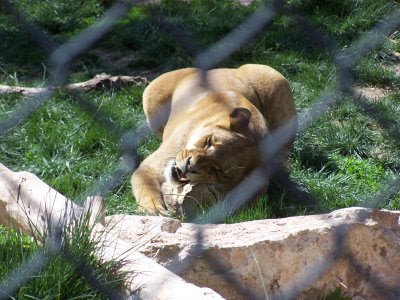 Prior to the lions arrival, the Amarillo Zoo acquired Holly, a Bengal tiger from the town of Lubbock, Texas which is a 100 miles south of Amarillo. 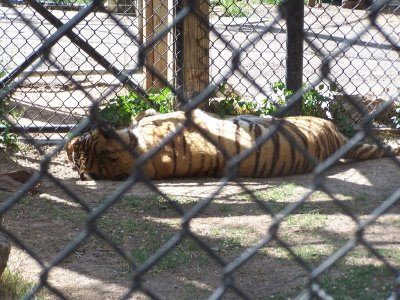 Holly was named for Lubbock's famous son Buddy Holly but their zoo did not have adequate facilities to properly care for her. As an Amarilloan it's always good to know we have something better than our rival city to the south.

Another newish addition to the zoo are the wallabies. 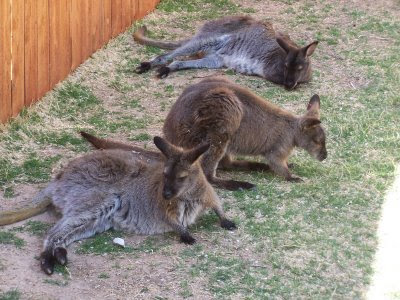 Not Everything is new. There is still a cage full of pigeons that harkens back to yesteryear. And a Longhorn still plods along in a barren dirt corrals. and that old western section full of goats sheep, and aoudads still stands as well. 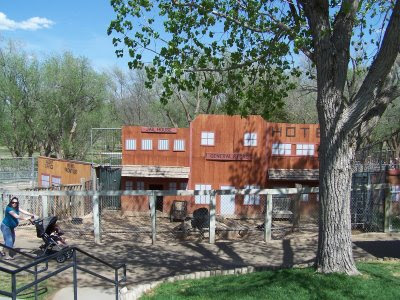 But the zoo is continuing to work. Elk are soon to be added to the large grassland area already stocked with Pronghorn, deer, and bison. Construction is under way for a new herpetarium and plans are in the works for a new children's area which is to include a petting area. 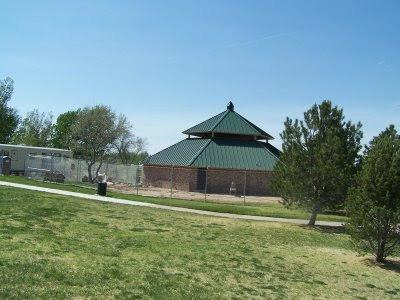 The Amarillo zoo is now a place I can take my boys and be proud. No, it's not all the way where it needs to be, but hopefully the city and the people of Amarillo can come together to find the necessary funds and expertise to continue the trend of improving the facility. 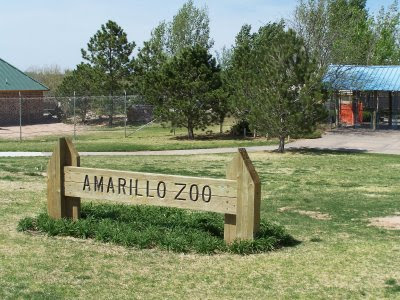 As always, check back here throughout Sunday and Monday, for links to other bloggers as they take us to their location for MY TOWN MONDAY.

Nice pictures. The zoo is one place I can always visit happily, and I never get bored there. I don't have an awesome camera though to get the good shots you have here, but its okay. Thanks for sharing though. I hope Amarillo makes it even better in the years to come.

We have our share of animals around here, Travis. I feed a fair number of birds and bees, they pitched in for me for Mother's Day! :-)

I love a nice zoo. I've actually been to this one, years ago. I'm glad it's been worked on.

Funny that Edmonton's Zoo was also called "Storyland" way back when. Our fish tank is in a sharks mouth though ;) It is nice to see zoos improving conditions and going away from themes, but I know ours still has a long road ahead of it.

Thank you very much for adding a link to my blog! I appreciate that very much :)
I love the story of the Amarillo Zoo. Here in Vienna, we have a very old zoo with very small cages, too. During the last years, everything was improved, too.
Thank you for sharing!

I love zoos, especially the kind where animals are housed in cages with realistic habitats. Glad Amarillo is working on its zoo. My favorites are the Woodland Park Zoo in Seattle and the San Diego Zoo's Wild Animal Park where the people are encaged in a train and the animals run free!!

The New Orleans Audobon zoo was once a laughing stock and now it's a model zoo. There's hope.

Nice post I am not keen on zoos they always seem sad and I'm not one of those flag waving animal liberation types either!!! Your zoo looks like its moving forward though!!
I have just posted MTM on a Sunday evening, shock, horror!!!

Nice photos. Sounds like your children will have some good memories.

I like small zoos better, actually. You can really see everything and they're never as crowded. Cool pictures!

Hi Travis. Thanks for stopping by my place.

Zoos have always been one of my favorite places to take our kids - and now our grandkids. The St. Louis Zoo is a really nice Zoo and free! We took three of the granddaughters there last summer. Check it out here: http://punkndeanna.blogspot.com/2008/08/meet-me-in-st-louis.html

I'm glad to hear things have improved at the zoo there. A bad zoo is a depressing and hurtful experience. And that's not counting what it's like for the animals.

By visiting the zoo, Travis, you will be adding to its coffers to help fund its maintenance. Spider monkeys appeal to me with their long arms and legs.

Did you catch any fish on your fishing trip?

THe old zoos were so sad, weren't they?
The Duluth (MN) Zoo in the 60s was horrible, and even as a very small child would worry about the lions. I am so glad that the building and maintaining of zoos has become more of an art form!
Pearl

My post is up, Travis. I'll be back in the morning to read.

Clare has a great MTM post up over at Women of Mystery!

Okay, is it me or are all the Blogger date/times screwy in advance of thier scheduled outage in 2 hours?

Terrie notified you about a post that wasn't up yet (but is NOW), and your post thinks it's Tuesday.

Aside from that, I'm delighted to hear you have a herpetarium on the way. I'm a herp fan!

Our zoo is slowly pulling itself into the 21st century too.
Mine's up now.

The closest zoo to us is in Tulsa. I haven't been there in years, but I always enjoyed a stroll through the zoo.

Some old cas were in town:
http://chuckschatter.blogspot.com/2009/05/mtm-old-cars.html
Chuck

Mine is up now.

In fact, I spent about an hour and a half before going to see Star Trek Friday snapping photos along the Ohio River for about six weeks worth of MTM's.

Plus my wife "suggested" we go to Cincinnati's zoo on our date day in a couple of weeks. I think she wants to feed the giraffes.

I'm glad the Zoo in your town is improving.

It is a great place to take little children. I used to do that when my children were small. We had an enjoyable time. It was a picnic. We used to take food and eat there. Those were good days. My children are grown up now and I stopped going to the zoo. Your post brought those beautiful memories back to me.

Have a lovely day Travis:)
Joseph

Hi Travis,
Thanks for stopping by and commenting!
Sorry, I just don't love Zoo's, but I do enjoy
watching the wild life at the local bar!

Sounds cool. I love taking my kids to the zoo.

We had buffalo way back when. I guess you had missed that part. I sure am glad they kept the monkeys you know how much I love them. Nothing beats a pack of nasty little monkeys.

You brought back my memories of the zoo!! I remember seeing the elephant though!!! Good blog!

What was with that cave thingie anyway it scared me too. there were always stories about people being hurt in there when I was little!!

Dang you have a lot of commenters Travis! I wonder if you ever even get to mine! LOL

I'm glad they zoo realized that improvements needed to be made and they are making those improvements. The Nashville Zoo did that a few years ago. The actually moved to a whole new area, called Grassmere, and it is just beautiful! But I still get sad when I go to zoos. I know sometimes it's necessary to keep animals that way because they couldn't make it in the wild, but still. I just saddens me.

Great post - is there a Storyland in every state? There was one up near where I used to live in NY and boy did it sound like you described the Storyland zoo - small cages with odd, fairytale-type houses in painted cement with some chickens or pigs, or other common animals - and dirty. They closed it ages ago too. Good riddance!

You reminded me that a colony of wallabies lives in the hills above our Honolulu.....Aloha

Great pictures. And I'm glad you have a nice zoo. But I have to admit that I am not a fan of the zoo. I always get so depressed seeing the animals in cages. I know - this is when you see my bleeding heart...

i wonder if they still give the Baylor bears Dr Pepper? they used to drink it by the ton...

I enjoyed your post. Going to zoos is one of my guilty pleasures. I love to see the animals up close (even local, everyday animals), but always feel a little bad in that even the best zoos can't provide the best habitat for animals. It sounds as if Amarillo Zoo is dedicated to improving their facilities, and that's great.

Amarillo Zoo is a joke. Last time I went there and saw a black panther in a tiny ass cage, oh but at least he had a bowling ball! That place is crap! I took my son once years ago, and vowed never to return. It is like a prison for animals. Quit trying to sell it as something great. If I ever came into a huge chunk of cash I would buy that crap hole and shut it down! I've lived in Amarillo since I was a child, it might be better than it was, but that doesn't make it anywhere near a great thing!