Victory or Death, Travis Style -- A My Town Monday Post

This week's My Town Monday is going to be a bit different. More of a My State Monday, because the famed and fabled, Chris Eldin has requested via twitter that I do a post about Travis County, Texas.

Truth is I don't know a whole lot about Travis County. After all the finely named county does lie right at 500 miles south of my hometown of Amarillo. I can tell you that the county seat of Travis County is none other than Austin, the state capital of Texas. A quick trip to the internet tells me that the counties population is just shy of one million. I also learned that the county has added 400,00 residents since 1990 and that it has one of the highest property tax rates in the nation. The county comes in 37th to be exact. Also Travis county was founded in 1840 and encompasses just over a 1,000 square miles. Within the county one can also find Lake Travis.

But the Austin area does not have the monopoly on the name Travis. There are dozens of schools, streets, and parks that proudly bear the name, including Amarillo.


I did not attend Travis Middle School, but here is a sign showing the front of the school which sits on the northeast side of Amarillo. Their sports teams are referred to as the Travis Texans. 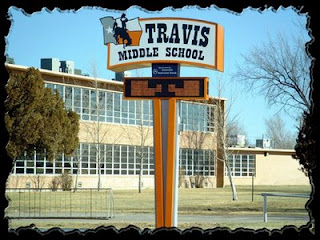 Not to mention lots of people. It has become a fairly popular name among young kids here in the state. When I was growing up I only ever encountered one other Travis in any of my classes and he eventually moved away.

So what's with this proliferation of Travis's here in the Lone Star State. A simple battle cry can explain quite easily -- "REMEMBER THE ALAMO!"

William Barret Travis was but one of the many who died at the Alamo while fighting for Texas Independence. He was a Lieutenant Colonel in the Texian Army.

Legend and lore are thick concerning the Alamo. Movies have been made and many of the names are very recognizable to even those not fortunate enough live here in The Lone Star State. James Bowie and Davy Crockett at the very least. Incidentally I attended James Bowie Junior High here in Amarillo. Yes there is a Crockett as well as a Fannin, Austin, Bonham, and Huston. The leaders of the Texas Revolution are represented quite nicely among out school district.

But back to William Barret Travis. On February 26th, 1834, Colonel Travis, under siege and badly outnumbered by Santa Anna's army, penned this famous letter,

Fellow citizens and compatriots;
I am besieged, by a thousand or more of the Mexicans under Santa Anna. I have sustained a continual Bombardment and cannonade for 24 hours and have not lost a man. The enemy has demanded a surrender at discretion, otherwise, the garrison are to be put to the sword, if the fort is taken. I have answered the demand with a cannon shot, and our flag still waves proudly from the walls. I shall never surrender or retreat. Then, I call on you in the name of Liberty, of patriotism & everything dear to the American character, to come to our aid, with all dispatch. The enemy is receiving reinforcements daily and will no doubt increase to three or four thousand in four or five days. If this call is neglected, I am determined to sustain myself as long as possible and die like a soldier who never forgets what is due to his own honor & that of his country. Victory or Death.

P.S. The Lord is on our side. When the enemy appeared in sight we had not three bushels of corn. We have since found in deserted houses 80 or 90 bushels and got into the walls 20 or 30 head of Beeves.

On the outside of the envelop he wrote, Victory or Death.

Help never came, and on March 4th of 1834 legend says that Travis called his troops together. Addressing the assembly he is reported to have said, "We must die. Our business is not to make a fruitless effort to save our lives, but to choose the manner of our death." At which point Travis took his sword and drew a line in the sand and asked who would step over the line and die with him in the name of freedom, liberty and the Republic of Texas.

Only one man did not. Moses Rose, a former french soldier of Napoleon Bonaparte's Grande Armee. Rose has forever since been described as the Coward of the Alamo as the next night he snuck out and escaped through the line of Mexican soldiers beyond the Alamo's walls. It was Rose himself that first told of Travis's famous line in the sand.

In the early predawn hours of March 6, 1836 the Mexican Army attacked after a thirteen-day siege. Travis along with more than 200 other defenders dies during the Battle of the Alamo, but their deaths motivated others to finish the work. Remember the Alamo! and Travis's Victory or Death became the rallying cries and on April 21st, 1836 the Texian Army under command of General Sam Houston ended the war at the Battle of San Jacinto. The battle lasted a mere 18 minutes. Mexican General Santa Anna was captured shortly after the battle and with that the Republic of Texas was create.

The Republic stood until December 29, 1845 when Texas gave up it's status as a sovereign nation in favor of statehood.

And that is what I know about the name Travis.

For more My Town Monday posts from Bloggers the world over, check back throughout Sunday and Monday. I have dropped the ball and missed a few links the last few weeks so I am going to change my methods a bit this week. Colored links are active and the others are forthcoming. If you wish to participate please drop me a comment.

Nice post, Travis. We forget our history and the sacrifices and just plain crazy dedication it took to give us what we have. And maybe we should thank Moses for his quite sane desire to live to tell the story.

Not sure how I would have voted on the statehood issue, all things considered.

Hey, don't forget me! I'll have a post up, too---this time about the Cleveland Museum of Art's Parade the Circle. And, as usual, I will be back later to read :-)

Fascinating, fascinating. I loved learning about the PS in his letter and "The Lord is on our side" quote. Great post Travis and I will have an MTM on Xunantunich, Belize.

I loved this post, Travis. It was so interesting. But you don't need to draw a line in the sand; it would deprive us all of too much enjoyment.

I so love learning about the history of people and places.

I really should start visiting some of the other MTMer's

LOVE it!!!
Thanks for all this interesting history!
I'm in the mood to watch a good Western now.
:-)

First of all, thank you for the comment you left on my blog...I really appreciate it!

Your posts are fascinating. Much of my work as a children's author has been non-fiction. I'm always shocked at how little I know (about something I should have learned a long time ago).

This post made me want to visit my sister...she lives in San Antonio! Since she's coming here July 17th, I'll probably wait.

Excellent post Travis - The history was very informative and I've cut and pasted it into my files - that letter was great to read. Don't think I've ever come across it before.

I always wondered where the "line in the sand" saying came from.

It came from Travis!

Hey Travis, this post is awesome! Thanks so much for linking back to me.

Hope you have a great week!

Hmmmm. Sounds a bit familiar. Afterall, even the Germans went to war in WWI with "Gott Mit Uns" on their belt buckles.

However, what is clear is that after Travis told the Lord that the deal was "Victory or Death," the Lord made his choice and Travis was, as they say, history.

Maybe the lesson is not to tempt the Lord.

OK, Trav, not only have you dropped the ball, you dropped that phenomenal badge I designed for you. It took me hours...OK, not...
I have a post up. I'm a wannabe biker chick, I guess. Instead, I ended up soliciting in from of our local liquor store...

Tourist season is upon us!

I, too, will have an MTM post up probably by midnight and will be back to read your post later, Travis.

You should move so you can live in Travis Co, that'd be cool! I have been to texas quite a few times, cheered at 2 alamo bowls, and been to 3 sun bowls, always loved it in Texas

My Son-in-law is named Travis.

Ah, the line in the sand. I don't think I've heard that story since junior high history, Texas state history class, that is. And I went to Sam Houston Junior High.

Women of Mystery have a post up about FDR's presidential library in Nyde Park, NY.

I loved this post! Thanks Travis. And thanks to Chris for suggesting it! My MTM post is up. :)

My MTM is up here (on the streets of Cambodia)...

As an aside, it is very likely that Colonel William Barret Travis was a classicist.

Livy (Titus Livius 59 BC - 17 AD) tells us in his Ab urbe Condita of one Gaius Popillius Laenas, a Roman negotiator sent to deal with Seleucid Empire army and its king, Antiochus IV Epiphanes, invading the Roman Province of Ptolemaic Egypt.

Gaius Popillius Laenas, upon meeting the invading king, drew a line around Antiochus IV Epiphanes and abjured him to not cross that line until he answered the Roman Senate's demands that he leave off his invasion.

Antiochus IV Epiphanes read the Roman Senate's demands, gazed at the surrounding troops, and acceded to those demands. He then crossed the line, and departed for his own empire, where he sued for peace with the Roman Empire.

So now you see why I strongly suspect that Colonel William Barret Travis was a classicist.

It's finally up Travis, and not exactly about Toronto.

I know this: Texans are proud proud proud of their State: Don't Mess WIth Texas! *smiling*

I have family in the Dallas/Ft Worth area....

I would guess the new 400,000 residents are Mexican? The new folks keep the teachers in business :-)

I should be doing more Detroit history. Since I didn't grow up here it would take a lot of work.
Thanks for a nice step back.

LOL!! When we named our youngest 'Jake', I had never met anyone with that name. Now they are everywhere!

I know there are a few Lissa's scattered about the country, but very few and I am the only one I have ever known!! :]]

I need to start reading about West Virginia...

You'll never believe it, but I actually wrote a MTM this week. Believe it!