Today was supposed to be the start of the new My Town Monday rotation, but blogger has been down so I'm not sure if Clair has been able to get on to post. I had planned a new MTM post myself but when blogger refused to cooperate yesterday evening I was forced to scrap those plans as I simply do not have the time this morning to write up a new post.

But this being, the first week of the newly revamped My Town Monday I feel obligated to post something. So here is the very first My Town Monday post I ever did. Originally posted in February of 08 I am tossing it back out here for two reasons. One I have lots of new readers that were not around I February of '08 and two it sort of explains MTM for any of y'all who would like to join the gang and blog about your town or area on the occasional Monday.

My Town Monday - The Launch

Okay, it's Sunday, not Monday but this being the first week I thought I'd get a jump in order to see how many bloggers we can get on board.

Here's the deal for the foreseeable future I'm going to blog each and every Monday about my town -- Amarillo, Texas. And maybe even the surrounding area. I hope many of you will do the same. I know I am always curious about other people and places and I think this will be a good way for us all to learn about other cities, towns, states, and countries in an entertaining and personable way.

The way I see it the topics are endless. The history, famous citizens, the economy, the political climate, the human interest stories. I also would love to read why you chose to live there, or why you stay. The things you like and dislike about your community. The best places to eat, have a beer and why those establishments are your favorites. Make 'em funny, make 'em sad, make 'em up if you have to, but reveal what it is about your town that makes it unique.

And leave a comment telling me you've participated and I'll add a link to this post. I'm shooting for at least ten other bloggers to jump in this week so spread the word. My eventual goal is to have at least one blogger in each state and as many foreign countries as we can, but if you live in Timbuktu and some other blogger from Timbuktu is already on board, jump in anyway. We all view the world through different eyes and therefore our perspectives are different, so I'd love to hear them all.

Okay,I've rambled long enough about my plans now to the first installment.

There is not going to be any rhyme or reason to these posts. They will follow no chronological order or anything and while I considered starting with the history and story behind the settling of Amarillo I instead chose something much more recent. 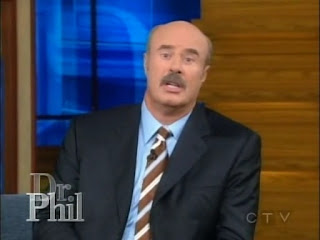 Do you know this man?

Surely you do. Dr. Phil.

No he is not from Amarillo. Now I guess that there are a good many people out in the world besides Oprah who like this man. There has to be. After all, he has his own television show, best selling books and who knows what else. He is by all accounts a successful man.

And he grates on my last nerve.

Just the sound of his voice is enough to irk me. I'd rather eat an entire bowl of lettuce than listen to him spout advice and those who frequent my blog know that I'm a devout carnivore.

So it is with great shame that I confess, the world might not have ever heard of Dr. Phil if not for my fair city of Amarillo. Here is why ...

Sometime in the mid 90's Oprah had a show about the dangers of America's food supply. Upon hearing about Mad Cow disease she said something to the effect she would never eat beef again.

The next day cattle prices dropped and continues to spiral downward for a while. The Texas Cattle Feeders Association which is based here in Amarillo decided to sue Oprah for slandering the beef industry. (In the comments, Carol pointed out that it wasn't the Texas Cattle Feeders but a group put together by a local feedyard owner that filed suit. A quick bit of research says she is right while I was wrong. See I already learned something from this myself.) I doubt even they believed they'd win the lawsuit but at the very least they would get a very public trial to spread the word that beef is as safe or safer than any other food source. The trial was scheduled to take place here in Amarillo and for six weeks or so Oprah did her television show from here in town. It was during this time she first took up with Dr. Phil. He was her spiritual and psychological adviser for the trial. She credited his coaching and calming influence for helping her prevail and shortly after that he began appearing on her show.

As a side note, every once in a while you still see an old pickup truck with a bumper sticker popular from that time. OPRAH IS THE ONLY MAD COW IN TEXAS

But to be fair Oprah had a positive impact on the economy and she shed a very positive light on the town on her show. She even made a point to eat a steak or two while she was here.

Next week, I'll get into the history of Amarillo and reason it has turned out to be the economic capital of the area. Don't worry, my post won't be as dry as it sounds.

Come on gang. Tell me a story about your town. Or visit these bloggers to learn something about their neck of the woods.

These links are old, from the original week as well and therefore may not be all valid but I wanted to let y'all see how other's presented their town in case you wanted to join.

Suv Mama -- Everywhere, almost. Go along for the ride as she heads for Washington.

Patti-O -- San Angelo, Texas -- Now we Texans have the rest of you outnumbered.

Alex Keto -- West Berlin, Germany -- Read this post. Alex is a former journalsit who has mnay great posts ona variety of topics with Kenya nbeing the most common, but this guy constantly enlightens me.

Britta Coleman -- Fort Worth, Texas -- Three Texans! We are whooping the rest of y'all rather handily.

To participate this week please drop a line at the official My Town Monday blog.

Email ThisBlogThis!Share to TwitterShare to FacebookShare to Pinterest
Labels: My Town Monday

I do have my post listed on the MTM blog. It's nice to be back in the saddle with you, Travis.

What a lovely idea! I look forward to next Monday's post to see where this goes!

How fun! this is the first time I've seen the very first MTM post. Sorry, but blogger did not cooperate with me either, and I left for a LONG school field trip where I took LOTS of photos for future MTM posts. If I get chance this evening, I'll throw up my MTM post. Late, but still....

I know who Dr. Phil is and he doesn't bother me that much. Lana watches him on occassion. I am mostly kind of amused by him.

It's nice to be back in the saddle with you,
Contextual Ad Network India