Rather than focus on Amarillo, or even the broader Texas Panhandle I am today, going to branch out to post about the great state of Texas at large. From Dalhart down to the Gulf of Mexico. El Paso over to the Red River. The Lone Star State covers 268,820 square miles. And as much as it pains me to admit there are at least a few folks residing in that area that are ... shall we say not playing with a full oil derrick. There might be some crude percolating deep within but for whatever reason it ain't quite making up to the refinery.

I heard from one of those folks this week. To be fair the woman in question is no doubt very intelligent. I'm sure she has a degree or two, probably even from the University of Texas down in Austin. But what she didn't have was a lot of common sense.


Back on September 7th, a mere 19 days ago I posted a blog citing the unTexan things about me.

"Certainly better than than the funeral director/car salesman of a leader we have had since the day George Junior vacated office."

George Junior of course being the President before our current one. The funeral director/car salesmen referring to our current Governor who is seeking reelection this November. His name is Rick Perry and he looks like this ... 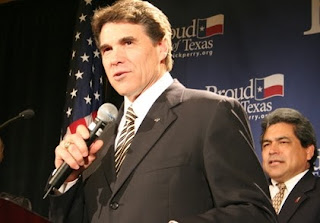 
For one he has already been in office a full decade and that is too long for anyone to serve int that role. career politicians go against my grain.


Perry has been the chief proponent for the $145 billion dollar the Trans-Texas Corridor, a project which I personally am against for a multitude of reasons.

There are other issues I have with Perry and his politics but in the end he reminds me more of a Close-the-deal-at-all-Costs kind of salesman than a leader. Thus my original comment.

Perry started his political career billing himself as a Democrat. inn 1989 he hopped over to the Republican party. I myself am an independent with closer ideals to the Libertarians than anywhere else.

So I found it downright hilarious when I opened an email from a lady who began by saying she was a big fan of my blog. she went on to identify herself as a regional field director for Perry's campaign. She stated that as "an important outspoken voice for Texas and Texans"   I would be doing my state a service if I blogged my support for Perry's reelection.

Funny how as a big fan she missed my comments about her boss a scant sixteen days before her email.

Now don't get me wrong I'm quite flattered that such high ranking officials even know this blog exists. And I ain't gonna lie. Being referred to as an  "an important outspoken voice for Texas and Texans" warms the cockles of my heart. But the fact this woman had done next to no research kind of ruins her credibility on all other matters.

I thought about responding as if I too am a career politician.


Dear Ms, Research Queen,
I am flattered that you find my humble home in the blogosphere worthy of such an honor as endorsing your candidate. Being that I posses such an important and and outspoken voice, your words not mine but may I suggest the addition of valuable I feel it is in my best interest to decline your proposal as I must concentrate on the marketing of my latest writing endeavor.
Unless of course I was suddenly to find a book deal, with a sizable advance and substantial royalty rate. I am sure it would be a mere coincidence if one of Mr. Perry's donors owned said company, or in some way held sway over the powers that be that make said decisions.
Should that book deal materialize I would suddenly be filled with kind words about your candidate, but if not I am afraid my muse will remain forever busy partaking in Willie Nelson's herbal therapy classes.
Signed,
Travis "  Itchy Back "   Erwin


Don't forget to hope over to the official My Town Monday blog to read about other places on this fine globe.

Email ThisBlogThis!Share to TwitterShare to FacebookShare to Pinterest
Labels: I'm a Doofus, My Town Monday, Texas

You understand politics well -- I hope you succeed in getting your back scratched!

Awwwww go on and send that email - oh go on you know you want to!!

If you want to get rid of him, offer to write his speeches for him.

Because you are such "an important outspoken voice for Texas and Texans" I think you'd do a fine job accomplishing your political goals.

Someone is confusing Texas with Chicago, Mr. Itchy-Back.

Nice letter. Perhaps she really IS a big fan of your blog, and just happened to miss the post dissing Perry. Don't be surprised if a book deal does materialize out of this. You crooked politician, you. :)

You can always use her email as an advantage:

"One Word, One Rung, One Day--officially endorsed by the State of Texas"

As I clicked on your comment box, by the way, there was an ad for O'Malley/Brown--Maryland's own incumbent whom I am far less enthusiastic over this election season.

I don't follow American politics very closely but I had to chuckle at this! It reminds me of the writers who send queries to agents who don't rep their genre. Or send to agents and spell their name wrong, or mention the wrong agency. Homework people, homework! :)

Texas is so big, that your MTM post is a MSM one.

*lol* "Willie Nelson's Herbal Therapy Classes". I'm so going to use that sometime.

Now... what would you do if a book deal did suddenly materialize... with strings attached? :-D

Also, unrelated, but I know you'd love it- I hang around a Paleo forum sometimes just for kicks and I found this quote:
"Salads, especially the nutritionally dense and anti-oxidant rich varieties are the spawn of Satan and have been a bane to the human species for countless millennium. You would be well advised to avoid these demonic plants at all costs." http://paleohacks.com/questions/11185/is-eating-salad-considered-paleo

Very interesting! Do you have stats on your blog? Can you see when a gov't official has checked it out?

Obviously, every man has his price.

What's depressing is I would have settled for less.

FYI - Rick P does not own our publishing company!!! Nor do we employ his momma or his aunt or his third cousin twice removed (which is kinda hard to get around in Texas!)

You should've done it!

I hope you sent that email. And I hope you dedicate your book to Rick Perry. :P