Most Texans don't give a damn where the word California came from. What they do know is it leaves a bad taste in the mouth. For most Texans California is a synonym for liberal. For crazy. For flaky ideals and shaky morals.

I myself have only been to Southern California once. I had a good time but truth be told that is entirely too damned many people in one place for me. And that hectic pace didn't quite jive with my laid back demeanor. But to each his own. I get the fact some folks cringe at the idea that the Lone Star State is home to an estimated 48 million guns. Given there the 24 million residents that means there are two firearms for every man woman and child in the state.

Don't Mess with Texas might have started as an anti-litter campaign but simple math shows the motto carries a bit of oomph beyond a ticket for tossing your Slurpee cup out the window. 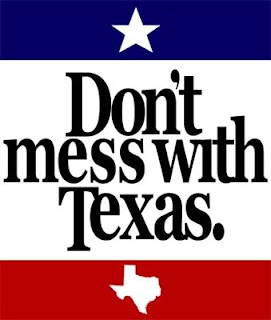 Yeah, I really am going somewhere with this post.

And not just California but San Francisco, California. To the average Texan not a damn thing worthwhile has ever came out of  San Francisco, the hippie, homosexual, tree hugging capital of the world.

For the average Texan this world series is a battle of good versus evil. Right versus wrong.

I am not the average Texan.

I have voted for a Democrat. I write women's fiction for God's sake. That alone is enough to make a few of my fellow Texans question my sexual orientation. I would be tickled pink if both the Texas Longhorns and Dallas Cowboys never won another game.  Heck, the very fact I used the words tickled pink damn near makes me a commie in this state.

And to add insult. I don't really like baseball. I find the game boring. Especially on TV. At the ballpark with a beer or six and a bag of salty peanuts I can take in a game and actually enjoy doing so, but sitting on my couch watching grown men play a child's game simply does not do much for me. I'd just as soon go stand in front of the mirror and watch myself scratch my own balls.

But there is one thing going for the Texas Rangers that draws me in. Part owner and team president -- Nolan Ryan.

I admire the man. A native Texan he is by far my favorite baseball player of all time. Yeah I know he played for the Mets and Califonia Angels but I don't hold those stints against him. He also pitched for the Rangers and the Astros.

In August of 1993 a 46 year old Ryan made the much younger and larger Robin Ventura look like a fool when he charged the mound.

My second favorite Nolan Ryan memory came in 1990 versus the Kansas City Royals. 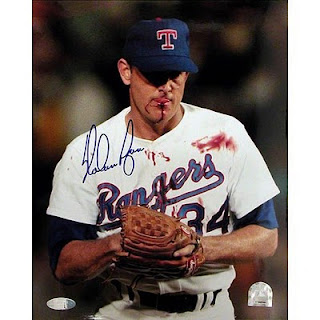 The Royals Bo Jackson (yes that Bo Jackson of Bo Knows fame) hit a screaming bouncer back to the mound. Ryan misplayed it and the ball smacked him in the mouth. But Ryan grabbed the ball and threw out Jackson at first.

Blood poured from Ryan's lip but he refused to leave the game. He kept pitching and the Rangers beat the Royals, 2-1.

So when the first pitch is tossed I'll be on my couch along with a slew of other Texans cheering on the Rangers.

But of course as I've made clear on this blog for a long time, I can be bought. Especially to advance my writing career, so if a certain San Francisco based literary agent wants to sign me up and start hawking my books to New York editors I'd put on a Giants hat. Hell, I'd even dawn a damned Yankees cap if that what it took, because like Nolan I'm gonna keep pitching no matter how many times I get smacked in the face. The Rangers made the fall classic after 50 years of franchise futility. Hope it doesn't take me that long to reach my goals.
Posted by Travis Erwin at 10:46 AM

i'm from california, i live in georgia, but i know texas wants me anyway! i'm still rooting for the giants. you crack me up, sugar! i like that about you. xoxoxo

Don't imagine there's much average about you.

Nolan Ryan sounds like a true sportsman - none of these whinnying you get with footballers (soccer people) who roll about pretending to be in agony when they trip up over their shoe laces to get a free kick or an opponent booked. And all the while being paid squillions of pounds too.

Woot! Go Travis! May you bat it out of the park someday soon.

(And I completely agree with you regarding baseball.)

Well, where the Cowboys are concerned, you may have gotten your wish.

Kevin
Native Texan, football fan, baseball fan, who writes books reviews and fiction that does not often sell with acute visual typo disease. (an incurable malady where suffers have to delete posts and repost items because typos were spotted after initial posting. there is no cure.)

Seeing as how I too am not a baseball fan, I'm going to have to try that standing in front of the mirror thing. God knows I deserve it.

I can't stand baseball either! It's basketball time!

You are an ACE, Travis!

Isn't that the way? Sometimes one person can exert that magnetism that draws you to watch. Not a lot of Americans are chess players, but when Bobby Fisher took on the Russian Boris Spassky even some baseball fans rooted for him!

Yeah, I'm not a big fan of the Cowboys or the Texans, or of California, or of Baseball, although I have drunk a wine called tickled pink and liked it. I'll be rooting for your Texas team in this series though.

A born and bred Texan, having lived in San Francisco, California, (GASP!), I concur with the idea it's too much of everything I don't like. And I don't keep up with baseball except the playoffs, but I don't watch most other sports, either.

However, my commentary about Nolan Ryan is that... Here's a man who brought dignity and true professionism to his game. It wasn't seemingly about how much money he could make. I never heard that he threw a bat at a spectator. He never was accused of the myriad of criminal activity plagueing the rest of the sports world players. I kinda like that about him.

And no, there's nothing average about you, Travis. That's what I like most about you - you might not follow the crowd in every aspect, but you stand up proudly for what you believe it.

Ahhhh Travis, your posts are always a breath of fresh air. I'm not of the same opinion as you on Cali (particularly San Fran), but I can enjoy your perspective anyway. And I for one am a fan of Texans - and the fact that they all own guns. When I move down to Arizona, I plan on getting a few myself. Anyway, thanks for the smile!

I grew up in the Cincinnati Reds heydey, so baseball is my thing. But I also like lettuce, so it's a wonder to me when you visit my blog :-)