Every day I mean to get something posted here on the blog and yet I haven't managed to get it done for the last week. Today's edition is gonna be a little all over the place so bear with me.

In good news, it looks as if one of my short stories is gonna appear in an e-book collection in the near future. I'll have more details later but I'm really excited because of the talented company my tale will be keeping. Readers of this blog will recognize most, if not all of the other authors. Trust me when I say talent abounds. But I am curious how many of y'all own an e-reader or have downloaded an e-book to read on some other device such as a smart phone or computer? Please chime in with a comment to let me know if you have or would seriously consider doing so.

November was a poor writing month for me. While many of my friends were busy cranking out 50K plus words for NaNo I was brooding, editing, and researching various markets. I might have written 100 words of new story. I hope December is more productive but then again free time is a rarity during the Holidays. Especially if you work for the Post Office.

Speaking of December. Here we are smack in the middle of "Ho" season so I feel it might civic duty to remind y'all to be mindful that the word Ho must always be used repetitively.

Ho!, Ho!, Ho! = Perfectly acceptable
Yo Ho Ho, and a bottle of Rum = Fine and dandy
You Ho, bring me a bottle of rum = Detrimental to your health.

Longtime readers will recall that once upon a time I worked as a mall Santa. Back in December of 2007 I blogged about a few of those experiences.  I'm gonna shine a few of those tales up and trot them back for y'all amusement this holiday season. Here is a picture and the original introduction to those tales which I dubbed ... The Sagas of a Second Rate Santa. 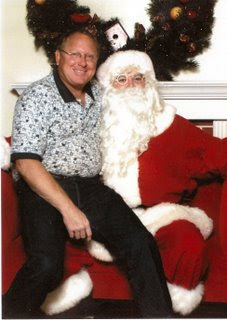 That's right folks, that's me lurking beneath those snow-white whiskers and red hat. And here is the real story of how I became a mall Santa and happened to have a six foot plus, two-hundred and something pound red-headed man sitting on my lap.

The years was 2001. I was just shy of my 29th birthday, far too young to make a good Santa, but then again I never claimed I was a good Santa. The previous spring I'd agreed to play the Easter Bunny at the mall so the Santa gig was my second stint for the company.

Who ran the company? The red headed man on my lap, who also happened to be my boss at the Post Office. He knew I had a new baby and could use a bit of extra money so he hired me for nights and weekends.

The Easter Bunny was easy. Ten bucks an hours plus commission if we met our goals of getting so many pictures. Later, I will share some Bunny stories, which are actually funnier than the Santa ones, but y'all will have to wait for spring for those. The good thing about the Easter Bunny was I just had to sit there in my suit.

No talking. No Ho, Ho, Ho'ing. Just wave and sweat in a gimongous fur covered suit while the sun beat in through the mall's atrium windows. Easy money.

There was nothing easy about being Santa.

First, because I was young and my eyebrows are black, I had to get this wax pencil and color my brows white each time I donned the suit. Also the middle part of my moustache bled through the fake beard so I'd have to use the pencil to color what I'll call the Hitler portion of my 'stache white as well. Then, despite having a fairly ample gut of my own, I'd have to tie this big poofy pillowed girdle around my torso. Then I'd slip into the red velour trousers and shirt, hoist up the black suspenders, and then slip into the leather boots. Did you know Santa's footwear isn't much different from a Hell's Angel's?

Last, I'd slide the beard into place. It itched like hell and those little fine grey hairs constantly found their way inside my mouth and nostrils. They tickled like hell and over the course of a night spitting out the hairs and keeping them out of my nose proved to be nerve racking. For all I know they gather that crap from the backside of Polar Bears so who the hell knows what kind of germs I was ingesting. Of course every sick and snotty nosed kid in town ended up on my lap, so it didn't make much difference that I was snorting a tainted white face wig.

So after a half hour of getting dressed I'd wait for the Santa on duty before me to come back so I could take his place on the throne. Then the fun would really start.

At Easter you might get three or four people in line at the busiest time. The parents are calm and relaxed for the most part since they haven't spent all day running around from store to store maxing out their credit cards in the name of good cheer.

Christmas was an entirely different story. After a ten minute break the line would be

twenty screaming kids long. Parents would be eyeballing their watches and scowling like constipated elves forced to eat prune-laced fruitcake.

Tomorrow I'll give you a little taste of the flavors of humanity that took a squat upon my lap that year. Let me tell you it wasn't all peppermint and sugar cookies.


And don't forget, I too am making a list and checking it twice. I wanna know your status on both e-readers and e-books. I need your answers 'cause the last thing you want is to be put on my naughty list.
Posted by Travis Erwin at 12:34 PM

I wouldn't want to be on your naughty list. So here's my answer:

Yes, I have an ebook reader (Kindle) and I'm not afraid to use it.

No naughty list for me (other than I eat lettuce,LOL). I have a Kindle, also read on my iPhone. My husband has both Kindle and iPad. We're both totally hooked. I haven't bought a hardcover book since the Kindle came out. I've also bought WAY more e-books per year than I ever did buying hardcovers. IF a book is not available as an e-book, then I'm probably not going to buy it. I'll wait for the library to catch up or I'll simply move on to something else.

I have never read an ebook. Don't have an ebook reader. I am a Luddite, I know.

Do I actually need to answer this, LOL! I read piles of e-books, but I don't have a reader. I read on my desktop computer, or if I'm travelling I read on my laptop.

I used the Kindle for PC application for quite a while, and finally broke down and bought a Kindle. I love it! I love eBooks!

A couple of weekends ago, I went on a shopping trip with my ladies group, and we stayed overnight. Since there were 4 of us to a room, I was able to use my Kindle and my book light to sit up and read and not bother anyone else. It was great!

I downloaded the freebie kindle app via amazon and hate it so much. But I've since won or been given as ARCs from writers in pdf format and they work fine for me as I just read them off the computer screen like a normal document. The freebie kindle download was just silly for me when I could just read the books as pdfs. So endeth my e-book/e-reader tales! :-)I hope this helps!

I never knew poor shopping centre Santas had to go through such trauma in the make up department before coming up Ho-Ho-ing!!! I loved your pic though!! LOL!!

Congrats! And yes, I have an eReader (Kindle) and I absolutely love it. I also read eBooks on my laptop if I buy them from somewhere besides Amazon but I find that most of the ePub only outfits allow you to download your book in a choice of formats, including one compatible with Kindle.

I'm seriously considering buying a Kindle - is that helpful?

Yes, I use my Kindle all the time. It's great for impulsive purchasing.

Can't wait to read more about ho's and Santa.

I have a Nook and love it. Plus I have the Nook app and the Kindle app on my iPhone so I am never stuck without a book, and like Beth said, I've bought WAY more books this year than I would have if I'd been buying paper books.

Congrats on the story! I'm really excited for you.

I have downloaded one ebook thingy, and I actually printed it out and read it that way, even though I could have on the phone or computer.

I don't have an e-reader, and never download e-books to read with one exception: books that I get asking for endorsements (remember, I'm a reviewer for TitleTrakk? Yeah- my name is now in 4 published novels *lol*). I very much hate reading books on my laptop, but it's not worth shelling out for a Kindle, Nook, or iPad for the one or two novels a year that I HAVE to read in digital form, and the prices of ebooks are rarely low enough to make it work buying the digital copy instead of the paperback.

I do, however, want the BlackBerry Playbook when it's released (iPad competitor), so unless hubs gets me a Kindle for Christmas, I'm probably just going to hold out for the Playbook.

Never read an e-book, Travis.Barely have an attention span for reading blogs!

I like to hunker down at night, in prep for going to sleep. Or in front of a fire.

Not a luddite, I've taught how to integrate digital tech to kids and teacher-peers.
But there is a time and place for all. I watch TV and play on the computer. To read good literature, a different environment!