There I was, Tuesday night toiling away in heated negations with a cars salesman on the  evening of my birthday. Not to purchase myself a new vehicle butt o trade off my wife's Dodge Caliber so she could have a new, larger ride.

It is at this point, I should point out that three years ago, when we acquired the Dodge Caliber I tried to persuade my wife to buy a minivan. But no, she didn't want to be a mini-van mom. She had no problem embracing the fact she was a soccer mom and yet she shunned the obligatory minivan than comes with said title.

Against my better judgment I let her talk me into buying a car too small for a family with two GROWING boys. I'm not a small fella by any means so I knew the boys would run out of leg room soon. And they did.

So for the last six weeks we have been on the hunt for a good used minivan with low mileage and all the bells and whistles my wife and kids craved.

And as luck would have it she found it on my birthday.

Dealing with car salesman on your birthday is about as much fun as as swimming in saltwater the day after getting circumcised. I'm speculating here folks but one can safely assume such a dip would be a painful experience.

So there I am, on my birthday, feeling like a Jewish kid in the Dead Sea. After hours of back and forth we strike a deal, but wait there is a snag. The Carfax shows a safety recall that has not been performed. We make arraignment with them to do something to make the automatic sliding doors safety compliant and all is well except they do not want us to put any more miles on our trade-in and our newly purchased mini-van will not be ready until the next day.

They offer my wife a Toyota Corolla as a loaner. She tells them no. She tells them, "I thought this was a Dodge dealership. You should give me a Dodge. And something cool she added. Like a Charger."

Ten minutes later she pulls away behind the wheel of this ... 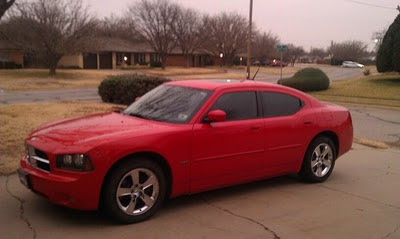 Following behind her, in her Candy Apple Red Hemi-powered Charger this thought occurred to me.

My wife was a cheater. For one night she was ducking away from her mini van driving soccer mom status and stepping out on the town with a sports car. It was the equivalent of a guy scheduled to get married on Saturday morning hiring a high priced hook for Friday night.


But hell, I'd be stupid to turn by back on an opportunity at hand, so I had a little fun myself. Psst, don't tell the Dodge Dealership but those Chargers will do better 140mph with the slightest of effort.

Tomorrow while the kids are sitting in the back of the mini van watching Toy Story 3 on the DVD my wife will be behind the wheel remembering the thrill of her one night stand.
Posted by Travis Erwin at 12:56 PM

Email ThisBlogThis!Share to TwitterShare to FacebookShare to Pinterest
Labels: Meaty Goodness, The Family

Travis' Wife:
They just thought I was the quiet soccer mom. They made me sit did not offer me a coke, bottled water, vodka and Cranberry juice. I just had to sit there and stare out in a car lot with a red, 4door I might add with plenty of growing room, Charger. I like my new mini van it has lots of buttons to push and I might save us all some money because I cannot drive as fast.

Hey - I'm a frigging technical soccer mom and no WAY will I ever drive a minivan! Even if I got one for free, I'd trade it in. Seriously. :)
But that Charger - oh, I want.

See, this is why you are such a great storyteller. You can take such a normal occurrence like trading in a car and turn it into an entertaining tale. Oh, and very nice ride - even if it was for only one day!

Have a Merry Christmas, my man.

But does she have a tramp stamp to prove this occurred?

I used to have a British sports car, which eventually died. Cherry red . . . and man, it handled great at top speeds. I still miss it. :-)

If it makes you feel any better, those Chargers don't do well in snow.

But maybe you guys don't have to deal with snow ...

You get a new car and don't even tell us!!! I see how we rate. Good thing you put it on the blog. Buying a car sucks no matter what. I got a red cougar one time as a loaner and I had three little kids. I felt rather stupid!! Glad you both had fun with it.

And on your birthday. Why not? Jennifer deserves a cool ride with a lot of buttons to push...

Hope you and your family have a great Christmas Travis :)

My old school big block 440 '67 Charger would eat that hemi for lunch despite the weight difference. Try a 0-60 in under 7 seconds with t op quarter mile run of 9.1 that was almost two tons of fun in the old day and didn't cost but about $4500 after I had the engine bored and stroked.

That new charger looks like my granda's car and to be honest I like my minivan almost as much as I liked my charger. It has a better sound system.

Not a soccer mom. But my minivan is full of awesome. It can haul two sofas and a chair! Or a family of four plus two dogs and suitcases.

Also, I will be muttering "Jewish kid in the Dead Sea" and snickering for most of the day today.

That's such a lark. My first husband won a Mercedez 450SL convertible onceuponatime. He drove it home from the dealership, popped it into the garage. I told him no way, I was driving it. It was sweet, but we couldn't even afford the insurance on it!
We sold it and paid off the mortgage!

Ahh, I was hoping for some nice debaughtery (sp?)but I enjoyed it none the less. Hopefully the charger charged her up for you that night ;o)

I LOVE that she made them give her the Charger!