But Everyone Is Doing It

Yes I am aware the Autumn equinox is still several weeks away, but guess what? I don't give a shit.

Those are my definitions so take your solstices and equinox's (and really Chevy this is the best name you could come up with for you quasi-SUV vehicle) and cram them up your sun dial.

For one thing it was the hottest and driest on record here in the Texas Panhandle. Not only did Amarillo set a new all time high of 111 degrees Fahrenheit but we also had 50 days of triple digit temps. Top that off with less than 3 inches of rain since January 1 and this entire region is a tenderbox.

But Mother Nature is going to do as she wants so perhaps more agitating was the two big summer trends that the masses made popular. 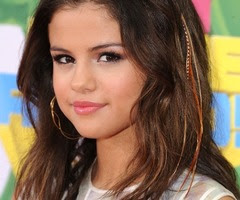 I can understand why say a 10 year old girl wants to clip feathers and tassel in her hair but unless you are a stripper, named Pocahontas, or are part peacock, I for the life of me do not get why a grown woman would do so. Yes, even my wife took part in this craze. I waited for days for her to lay an egg but alas she never did.


Yes that is Selena Gomez sporting the plumage up above. I used her picture since my 10 year old son thinks she is the hottest thing since Fried Chicken.
And summer 2011 fad number two?

Suddenly they are everywhere and frankly I think they suck. Who the hell wants fermented milk? Frozen or otherwise. The tang is bad enough but these damn places all have these flavor bubble doo-dads that are basically like biting into a puss pocket. Call me crazy but I don;t like the sensation of biting through a  thin film only to have something squirt in my mouth. Then they put the same crap in tea and call it bubble tea. Me? I call it nasty.

Here in Amarillo we have 8 or nine of these joints that have sprung up in the last few months. Half of them have a name that ends with berry but not one has adopted the name I'd use ... Dingleberries.

Let me know when goatee adornment and beef jerky shops become the next big things. Then I might be interested.
Posted by Travis Erwin at 8:52 AM

Email ThisBlogThis!Share to TwitterShare to FacebookShare to Pinterest
Labels: a strange world, Ranting, Riddle Me This

I am incredibly GLAD that summer is on its way out the door. Hate it.

We, too, have had a plethora of the frozen yogurt places appear. I have yet to try them.

Yes. Dingleberries. I have nightmares about bubble tea. I didn't realize they were putting that shit in frozen treats, too! Is nothing sacred?!?!

The world is a hard and cruel place, Travis.

I was reading the other day that the same weather pattern that gave Texas its blisteringly dry heat wave summer was also responsible for Australia's massive flooding in the spring (their fall.)

So perhaps the goatee adornment and beef jerky shops are popping up all over Oz right now...

I like your "book" of seasonal definitions - makes perfect sense to me!

I see a similarity between both your dislikes.
My husband asked me why I didn't have the hairdresser put feathers in my hair. I reminded him I was a FLOWERS girl.
So there are fans for every fad.

Hum, I don't think I even noticed the trend. Geeze I don't see anything around me.

Your description of bubble tea makes me not interested. LOL! We are already experiencing fall like weather. Whew...too happy!

We had nearly the same summer - record heat and virtually no rain.

Your classification of the seasons makes more practical sense to me.

I live in such a small town, no yogurt places popped up, but there's a gay bar a few towns over called Dingleberries. (Ok, not really, but there should be.)

Certainly feels like summer is done here now been in the 60's I hate it I prefer the heat :(

Not a huge fan of Frozen Yogurt, but that's a cool name for a store haha

My calendar looks just like yours.
There are several of the yogurt concepts in our area as well. I don't mind the taste so much, but I can't believe that they will all survive. Reminds me of the bagel wars several years ago.

The frozen yogurt craze has not hit my little corner of the world yet.. If their survival would depend on me, they wouldn't.

Bubble tea? Again, we're behind times. That is often a good thing.

Now the feathers are another thing entirely. I'll bet your wife looked exactly like Selena.

Thanks for the smile of the day.

I have just installed iStripper, so I can watch the hottest virtual strippers on my taskbar.