I've worked 19 years for the United States Postal Service. The last 13 1/2 in the maintenance department. Most of the time I work in the main sorting facility here in Amarillo, Texas but at times I am dispatched to other small post offices in both the Texas and Oklahoma Panhandles.

And not long ago I visited the facility in Pampa, Texas which is 55 miles northeast of Amarillo.

In all of my postal travels I have never seen a post office as cool as the one in Pampa. 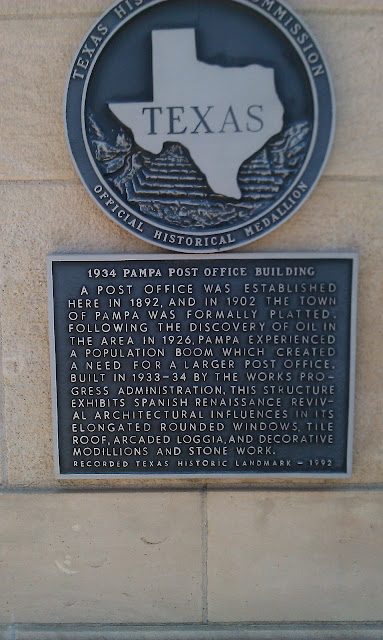 Here is a shot of the front of the building.

and of the old style postal eagle in the stonework.

And of a topless woman.

No really. See the lady near the top of the ironwork. She really is topless.

An odd thing for a government building especially one located in the bible belt. Sorry for the poor picture quality, but all I had was my cell phone.

Inside the post office is all marble, iron, and ornate woodwork. Here is a shot of ceiling.

And another looking through some of the ironwork.

And the old antique style of post office boxes. Note the  marble on the walls.

And a shot from the roof of the Spanish tiles.

A shot of Pampa from the rooftop of the post office. As you can see the town still has several brick streets.

And I'm including this last shot for all you postal haters out there. Yeah I know waiting in line can be a drag but the USPS still is the most economical, and best shipping option. Heck, with those boys in brown want their stuff to get there where to do they take it?

The above shot was taken at the Pampa receiving dock but it is a daily thing for UPS to drop off packages for us to ship. Why? Because we do it cheaper and more efficiently than they are able to.

For more My Town Monday posts from all over the world stop by the official MTM blog.
Posted by Travis Erwin at 8:37 AM

Every single book I have ever sent out both in the states and around the world has started the journey at the USPS. Wouldn't do it any other way..now if I could get my damn printer on that page...$33 to ship 30 books to me. GAHHHHHHHHHHHHH!

I am very concerned about whether these people in Congress will decide to turn the PO over to business. Nothing is beyond their loathing of government.

Your PO is beautiful - mine's just crowded. USPS click 'n ship and carrier pickup rock! Same great value with no lines. I'll be really disappointed if they cut those services.

Wow, looks like a neat place for sure. We've got a kind of cool one in Abita springs but they are getting ready to shut it down.

great building similar to many here.
I've been concerned about your employment, but seeing as you are at the main facility (and indispensable) I assume now you will be OK. Phew!

Do look for a rather shocking and special bit of news at my place in a couple days, Trav :)

That last photo is priceless!

Beautiful building, Travis. The old PO in Fort Worth was a gorgeous hunk of taxpayer-financed governmental bravura, too. I loved it, loved to go there to do business. Quite a hike, too, even if you could get a decent parking spot, for the building was a block long and all the floors were marble. Upper stories housed Federal offices of various sorts. Lots and lots and lots of them.

I'm not sure if or how that building is being used now. Interesting question.

That is a way cool post office. I can't tell you how often my brown truck stuff arrives by USPS. I love our small town PO, there is rarely more than one person in line. I hope that doesn't mean it will be one of those on the chopping block!

Beautiful old building. I love the eagle in the brick...reminds me of how detailed architecture was back in the day. I only ship USPO