Please ... And Thank You

My 2009 house fire taught me many things. First and foremost that this world is stocked full of good, generous, and caring people. Many of these spectacular souls banded together to create an online fundraiser for my family. I can't tell you what the out pouring of friendship and love meant to my family. I pride myself in my writing ability, but there simply are not words to describe some things.


Many of those same individuals in the online writing community have banded together to create a project benefiting writer, activist, and friend-to-many, Richard Levangie.  I have a story in the project as do many others. i have not read the collection yet, but given the talent involved I can promise you it will be a great read.

Here is a bit from the website created for this worthy endeavor ...

Welcome! Friends of writer and activist Richard Levangie are raising money to assist him as he recovers from neurosurgery to treat a pituitary tumor. In exchange for every donation, in any amount, we're giving away Facing the Sun, an anthology of 29 stories, poems, and reminiscences contributed by fellow writers from around the globe.

Richard is an award winning writer living and working in Nova Scotia. He has a degree in journalism from The University of King’s College, over a thousand bylines, and a national writing award. His articles have appeared in newspapers and magazines such as Endless Vacation, WINE Magazine, The Montreal Gazette, and The Halifax Daily News.

He has written and edited three daily environmental business publications for Fortune 1000 executives. He blogs at http://www.richardlevangie.com/ where he routinely promotes authors through his "25 Questions" interview feature.

Richard was originally diagnosed with a prolactinoma, a non-cancerous pituitary tumor, in 1994, which caused frequent, debilitating migraines and chronic fatigue.

Last year, an MRI revealed that Richard’s tumor had doubled in size, that it was more aggressive, and that it was invading his sinus cavity. In an attempt to avoid, or at least delay, an operation, Richard entered an experimental drug trial. Unfortunately, the results were not what he and his doctors had hoped, and on 5 April he was admitted to surgery. 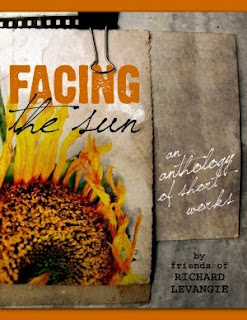 Years of illness have placed Richard in a financially precarious position, and his absence from the workplace is crippling. He's given a lot to the writing community. Now, with your generous help, we would like to give back.

Please donate what you can using the PayPal button below. No matter the amount, we'll email you Facing the Sun in pdf format. And we'll carve your name in stone in the sidebar.

Please visit the website created for this project and consider donating to help a great guy and to add some worthwhile reading to your collection.
Posted by Travis Erwin at 1:06 PM

Wonderfull reminder of the fact that we are all responsible for each other.

Thanks, for the heads up. Sorry to hear about Richard.

Travis, a very touching post and an excellent reminder that via the internet there are exceptional and caring people. Thank you for putting out the word.

Travis — what can I say? My words seen pale and weak.