I'm a competitive guy. By competitive I don't necessarily mean driven. At least not driven in the way that makes people get up at the ass crack of dawn and run 82 miles before work. Or hop on a bike and ride to Timbuktu and back just to say they did.

My friend Aaron "It Tastes Like Dirt" Sage is similarly competitive, but he also happens to be one of the aforementioned driven folks of this world as well.

Just recently Aaron celebrated a birthday. He's a few years younger than me so unlike me 2012 does not mark his 40th year on earth, but he's close enough to that number that you wouldn't think his idea of birthday fun would be to hop on a bicycle in 103 degree Texas heat and ride across the city of Amarillo. Yeah you'd think that, but you'd be wrong.

Now I like to think of myself as a good friend, but when Aaron and his lovely wife Kim first suggested we do this very thing to celebrate his birthday I thought they were both batshit crazy. The one saving grace was they wanted to ride from bar to bar. Which meant many beers along the way and let's face it, every absurd idea is easier to swallow with an alcoholic chaser.

Somewhere in the discussion I discovered this notion wasn't just some hair-brained idea Aaron had cooked up in his mind. No it was an organized event. a fundraiser for Ambucs put together by the fine folks over at 575 Pizzeria. (If you go, I suggest THE BENDER. You won't find a better, meatier pizza)

So I reluctantly agreed, and last Saturday I made the harrowing ride.

The event is called P3-People, Pints, and Pedals. 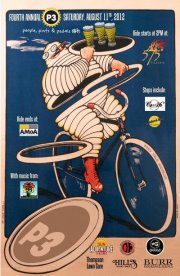 We listened to some reggae tunes while sipping a few beers in 575's parking lot before embarking.


I partook in a Shiner Bock (tasty as always), an Oskar Blues G'Knight Imperial Red (way too hoppy for this dude), and some kind of English beer that I can't recall the name. (but it was a tad too sweet.) 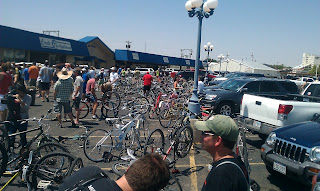 So then we (somewhere around 300 of us) hopped on our bikes and pedaled to THE GOLDEN LIGHT.

At the Golden Light we had several pitchers of beer. Pabst Blue Ribbon (because Craighead, another sucker riding friend is a cheapskate), a pitcher of Shiner, and I think a pitcher of Coors Light aka Colorado piss water. 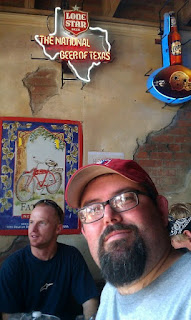 Then we departed for Crush in downtown Amarillo. and yes I will confess to nearly getting ran over by a big black pickup while pedaling across a busy street. I was still sober so I'll blame the sweat in my eyes for not seeing the truck when I dashed across the street.

At Crush I had a Stella Artois (a fine Belgium brew) and then I sampled a fancy martini because it had coconut rum in it. And despite being green it proved quite tasty so then I partook in another one myself 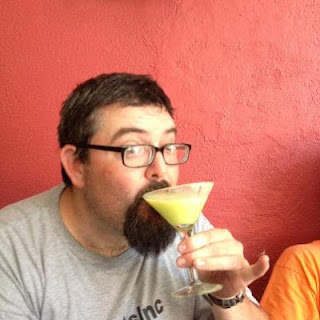 From there we rode to the Amarillo Art museum where we at pizza catered by 575 and checked out the George Rodrigue exhibit.

Despite my reservations going in I not only survived, but had a good time. The 7.1 miles we rode seemed like much less broken up as it was and given we had an hour or so of boozing time at each stop.

But I still feel obligated to dish up a wriggling bite of revenge upon Aaron for attempting to make me exercise. Those of you who have read my book THE FEEDSTORE CHRONICLES might have noticed Aaron "It Tastes Like Dirt" Sage was mentioned in the acknowledgements. He was listed because he had read an earlier version of the book and provided valuable feedback. (By the way Amazon is selling the print edition at 50% off for a short time)

For the first time, I'm going to reveal the origins of his nickname. It was a fall evening. October I do believe. A few beers had been consumed when Aaron began ranting about the grub worms ravaging his lawn. One thing led to another and someone challenged him to dig one up and eat it. A round of negotiations ensued. A $20 price tag was agreed upon and Aaron quickly swallowed one of the fat white wrigglers. But sadly the guy who challenged him had ventured off to empty his bladder, so Aaron ended up eating a second grub. he did so with a smile and the words, "Not too bad. It just tastes like dirt."
Posted by Travis Erwin at 11:40 PM

Well done all of you for staying on your bikes, inebriated, and doing the ride and surviving in one piece!!!

I hope Jennifer is ok!

Sounds like a good time was had by all.

Is that YOU, Travis? Capless? Sipping a martini? Pinky in the air? Hahahahahaha, I laughed so hard!

I hope your wife's fall didn't have adverse consequences.

Jennifer is fine. A skinned up hand her only "souvenir" of the fall. And yes that is me capless, because I was hot, sipping a martini- a green martini at that, cause I was thirsty, and pinky in the air because I am one sophisticated dude.

Burn 500 calories riding to the bar consume 560 while at the bar, wash rinse and repeat...yeah good thing exercise was not the goal.

Sounds like you did a pub crawl on a bike!! FUN!!