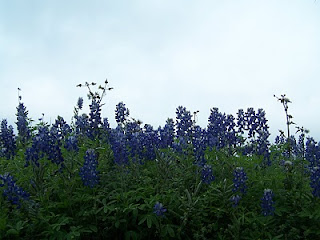 The bluebonnet is the state flower of Texas.

Bluebonnet is also the name of a literary award sponsored by the Texas Library Association. Here is a blurb from their website.

is a unique program that encourages
reading for pleasure and is aimed at
students in grades 3-6. Each year, 20
books are chosen as the “Texas
Bluebonnet Award Master List” by
the TBA selection committee.
If students read a minimum of five
books from the current master list
(or have the books read aloud to
them), they have the opportunity to
vote for their favorite title during the
month of January each year. The
author of the book receiving the most
votes statewide is declared the winner
of the Texas Bluebonnet Award.

I tell you this for two reason. one, I cut my reading teeth on Bluebonnet winners like  Superfudge by Judy Blume and Ramona and Her Father by Beverly Cleary

As far as I know my school did not participate in the official voting, however my 10 yer old son's school does. And he took the task very serious this year reading a dozen of the nominated books. He was quite proud and excited he would get to vote. Well that and his school's librarian does an excellent job of promoting the reading and the participating in the award by hosting a party for the kids that are eligible to vote.

The morning of the big event he was downright giddy and I just could resit having some fun with him so I lowered my voice conspiratorial and whispered. "When it comes time to vote go ahead and right down my book, THE FEEDSTORE CHRONICLES."

The look of pure disgust that graced his face was priceless as he said, "No, Dad. The award is for good books."

Of course he hasn;t actualy read my book as he is not old enough to know THAT MUCH about his dear old dad, but he is quite disgusted by the image of that guy pinching that girls butt on the cover.

For the record, I am not sure what book he did vote for but I believe the winner will be announced in April.

Your pride in your young literary critic is evident Lol!
Aloha

LOL.. too funny. And good for your boy for taking his task seriously.

Kudos to you for instilling in him a love for reading, and kudos to his librarian for making the whole voting thing a special event for the kids. My daughter was reading an awful lot, but then middle school hit and she has become a boy crazy pre-teen that would rather look at cute celebrities than read. Here's hoping she gets back into the books!

Good for your son for taking his voting duties so seriously! Nice to see. And I laughed out loud at your story, I must confess.

Yep! That is how a state promotes literacy.

In MI they take the whole damn thing to another level far away from schools and children. My first was nominated and I thought WOOT WOOT then I found out what a preening political contest it really was and declined the next two nominations.

If I was a young Adult or a children's writer and they had a practice focused on literacy for school kids that I would be proud to win.

Be proud of your son Travis, here we have trouble getting the kids up to speed by third grade. It get's increasingly harder after that age.

Lol. I am glad to see him take it seriously. Sounds like the kind of voter we need in politics.