Hey, give me a Shiner!

In other parts of the world that statement could get you a jab in the eye.

Here in Texas, it will get you a beer. 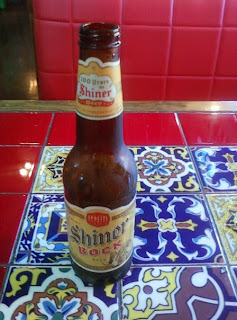 And not just any beer, but in my well versed, or in this case well drank, opinion the best overall beer around.

But I've waxed poetically about my love of Shiner Bock before so let's move on to how a few Shiners on a fine Friday night led to the book cover of Twisted Roads.

After I handed in the manuscript for Twisted Roads to Dee over at TAG Publishing asked me if I had any cover ideas. I told them I did. You see a friend of  mine that plays bass guitar had posted a picture of herself in red heels standing by her guitar. I liked the imagery put the guitar was wrong and she had on black pants and I thought a short skirt with bare legs would work better.

Dee liked the premise and said she'd check out some stock images. A week or so later she reported they were having trouble finding a good stock image, so I said, "Heck, I bet we could get the picture taken just as easy as we could buy a stock photo."

Dee seemed a bit hesitant but I really liked the concept so I assured her I could get the whole thing put together without blowing the budget.

But then a reality hit me. I wasn't exactly in the leg game anymore. I know lots of women but for the cover of a book not just any old legs would do. They would have to be long, and fit, and willing to pose.

I knew the right photographer. Brad McBride had made me look good with my headshot for the last book and if he could do that with a mug like mine I knew he could do amazing things with a nice set of legs. I knew I could acquire an acoustic guitar. So that left legs and a backdrop to find.

But try as I might I couldn't find the right legs.

Turns out, "Hey baby, I like those legs. Wanna pose for the cover of my next book?" isn't quite the pickup line you'd think. I'm kidding. It didn't really get to that point but close.

Then one Friday night I went along with my to a birthday dinner for one of her coworkers. I know most of her friends at work but still they are her friends more than mine so Is at at the end of the table and take great joy in the fact they had Shiner on draft. Shiner in big 32 ounce frozen mugs to be exact. Here was my view that night. 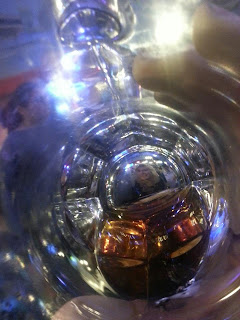 I was on my third maybe fourth frosty mug when in walked the legs. The legs I'd been searching for. I leaned over to my wife and whispered, "There are legs I need for the cover."

Now this girl or should I say young woman as she is in her early twenties was not a stranger. I'd met her before and she used to work as an aid at the school where my wife teaches. She was wearing heels but not red heels and not a skirt.

She initially sat at the far end of the table but wife waved her down to our end.

I explained the deal and she said she was game.

We hashed out a few details and the day of the shoot she showed up with several pairs of heels and those cool black hose you see in the cover shot. 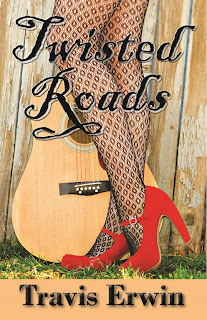 Brad found this cool weathered fence which we used as a back drop. I think the cover in itself tells a story, or at the very least suggests one. Lloyd the design guru over at TAG did a great job with the script and arranging the title and my name.

Twisted Roads is a Women's Fiction novel set in the fictional town of Grand, Texas. The e-book is set for a May 1st release with the print edition coming out May 15th.

I will be giving 5 Kindle copies away on release day. To be eligible for one of those copies all you need to do is correctly guess the songwriter for any lyrics I have posted this month including those at the end of this post.

I want to go home with the armadillo, country music from Amarillo and Abilene
The friendliest people and the prettiest women you've ever seen

thanks for stopping by sweetie, me and west appreciate it..

Hahaha! I love this story, and I love that your wife was so willing to help you out with the legs thing.

Great story, great book cover and yes, great legs! But the nicest pair of gams I ever saw belonged to a drag queen in Winnipeg. Next time, widen your search, LOL!

Debra, I've seen a few drag queens in New Orleans with the legs to pull it off but I'm afraid Amarillo's drag queens are not quite that pretty.

By the way the gal that did pose stands eye to eye with me in heels and I am 6'5.

This is the kind of question I get at many places, how did you figure out your book cover!
This is lots of fun to read.
You be havin' a good time, man!
Cheers from Cottage Country!

Gary P Nunn,
Steve Earle,
ain't got a clue on the other one.

Musical taste is personal; apparently beer too. Maybe you have to be suckled on Shiner. I wasn't.

sounds like Waylon Jennings to me! Great story about legs! :)

I knew from your comment on another post you were not a Bock man and I do not like all bocks. Lonestar's is horrible as is most of their beer, but Shiner is part of my sould I'm afraid. I drink lots of beers though,especially like Porters, Dark Ales and Stouts. I can't stand IPA or any real hoppy beer, but I have many friends that drink only that stuff.

That is the beauty of the world we all enjoy different things.Stick around I'm sure we will have some common ground at some point.

Hi! I'm at work surfing around your blog from my new apple iphone! Just wanted to say I love reading through your blog and look forward to all your posts! Keep up the great work!

What i don't understood is in reality how you are now not really a lot more neatly-favored than you might be now. You are so intelligent. You recognize thus considerably relating to this topic, produced me personally consider it from a lot of numerous angles. Its like women and men don't seem to be fascinated except it is something
to accomplish with Girl gaga! Your individual stuffs excellent.
At all times maintain it up!

It's perfect time to make some plans for the future and it is time to be happy. I have read this submit and if I could I want to recommend you few fascinating things or advice. Maybe you can write next articles relating to this article. I want to read more issues approximately it!

I personally love the cover!!! Great idea! And Whiner is the only beer I can stand!

Play bazaar
satta king Some portion of the objective of needle therapy is to assist you with discovering offset with your brain and body.