I'm still trying to get me bloggin' legs b'neath me. Yeah I know it's not Talk Like a Pirate Day, but what the hell, might as well have some fun anyway.


I spotted this pen the other day for a joint called SHEMEN Dental Group. I don't even know where this group is located and I'm sure they provide fine dental care but the name made me think of big-knuckled dentists, clad in red leather high heels telling me to run and spit as they rubbed their five-o'clock shadow. 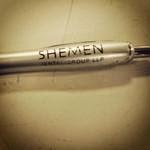 While I have been a quiet blogger I am still a pretty active Tweeter. Here is a pic I posted over there of a shoddy headline I spotted in my local paper a while back.


And what would Twitter be without the occasional selfie?


And then there is Instagram. I am a sporadic Instagramer.  After all, I don't even own a cat and I'm not a big believer of  posting pictures of every meal I eat. But When we have had some spectacular sunsets here in Amarillo as of late and sometimes things are just to visibly beautiful not to share.

The Amarillo sky beyond the parking after my son's football game.  #sunset #texas #amarillotx
A photo posted by Travis Erwin (@traviswriter) on Nov 11, 2014 at 5:17pm PST

On the beer front this one pretty much speaks for itself.

That headline is awesome. And so are those sunset pictures. That's one of the rare problems with were we live now - in the woods, you can't really see good sunsets or sunrises. It's more like, 'oh look, it's kinda orangey through the trees over there'. ;o)

Oh crap and i just paid $4 more for 110 pounds of Purina dog chow. How come I never get the sales?

That Buddha Beer is too funny! And very clever comment on the Old Yeller Dog Food. They showed us that movie when I was a kid in school. Kids cried for days over that goddamn ending.

Very cool pics and comments!
Thanks for socializing... LOL

It is nice to see so many from the "old" gang stopping in to comment.

satta king
play bazaar A great many people are under the feeling that it's only for torment, yet that isn't every bit of relevant information!