Shauna recently had a post about about the "joys" of raising boys over at her blog, The Coffee Shop, which reminded me of an old story.

When I first met my wife she was a senior in high school and living with her parents. I was a cradle robbing twenty-year old college student. Also living with her parents was her older sister who had a two year old son. Yes, the same nephew who at 16 now stands several inches above six foot and hovers around three hundred pounds. The one I mentioned in a previous post about high school football.

ur because he had a shaved head that reminded me of a corndog) was around a lot. And he was a funny kid, And since his Dad was absent I took it upon myself to introduce him to the finer aspects of masculine culture. Things like pro wrestling, fishing, making farting noises with your arm pits, and the joys of rubber band wars. The list could go on but I'll stop there.

He was about four or five one day when it was just me and him in the living room. My wife's parents were away as was her sister so the two of us were baby sitting.

instructed him to pull my finger. His eyes widened at the boisterous eruption.

"Do it again. Do it again." He squealed.
I obliged him for the sake of entertainment, and because I'd probably eaten at Taco Bell or some other such intestinal stimulating fast food joint.

He was in awe at my second acoustical outburst. After a few seconds he stuck out a tiny little finger and said, "Do it to me."

I pulled his finger at which point he grabbed onto the edge of the table and commenced to grimacing and groaning. 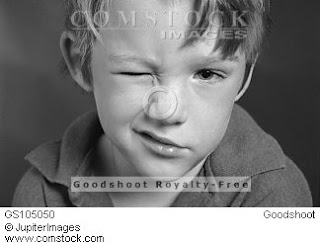 This is when Jennifer walked back into the room. She took one look at little Corndog and said, "What is he doing?"
"Trying to fart," I answered.
"No he's not," She said.
And in a very rough and strained voice Corndog piped in, "Yes I am." The the tiniest of pops came out and he smiled proudly.

My future wife simply shook her head and walked away.

I held my hand up and Corndog gave me a high five. It was a great moment that every uncle and nephew should share.
Posted by Travis Erwin at 1:35 PM

Email ThisBlogThis!Share to TwitterShare to FacebookShare to Pinterest
Labels: a strange world, Me, The Family

Well, no one can say your wife didn't know what to expect from you after that scene. I'll just assume she figured the nights out at the Paris Opera probably weren't going to happen.

Paris, Texas has an opera?

Sure, and have you been there?
Your Honor, I rest my case.

And she still married you? No, really, you made me laugh out loud! Your nephew is a lucky lad. Every boy should have an uncle like you. Wouldn't work with nieces though. As everyone knows, girls never fart.... Thank you for visiting my blog. Nice to hear from you. I hope my book will be available in the States. I guess it'll be available on Amazon?

You must have been so proud. :)

Errmmm, he would be your future brother - in - law Travis, not your nephew. :) (Sorry, couldn't let that pass - no pun intended.)

I have 4 males in my house and was raised as a tom - boy so potty humor is rampant in our house. They know all the names applied to various farts. (Mister is the "crop duster" of the house.) They also know about turtle turds and machine - gun shits. Eh, they're only young once. Oh, and all 3 of my boys could whip anyone at an armpit - farting contest. :0)

THat is so hysterical. Great story, I loved it! And it just so happens that I was planning on posting a funny fart story on my blog tomorrow. Hey - guess we all are a bit gassy these days. ;o)

I taught my daughter (yes, daughter) the pull-my-finger game when she was too young to understand that finger and fart were not cause and effect. She would pull on her own finger, wondering why she didn't get the same result.

Oh, and I taught her how to box, too. Any boy her age should think twice about getting into the ring with her.

LOL! See, I'm getting the humour. Scary, isn't it?

Oh, and my kids favorite part of Over the Hedge? When they burp the alphabet. And Open Season? When Boog pukes up the fruit loops.