Once Upon A Time

ONCE UPON A TIME, in a not so far and distant land, a young man awoke to the most peculiar of clicking sounds. This young man certainly was no prince and the place he called home was distinctly un-castle-like. Nevertheless, the young man would not have traded places with even the ruler of the world's greatest kingdom.

For you see, that day he was to wed the fair maiden who had claimed his heart. Lying in bed he smiled as he always did at the thought of her beautiful face. But, that peculiar clicking sound persisted, so the young man threw back the covers and slid out of his nice, warm bed in order to investigate. He shivered as he crept over to the window, which seemed to be where the clicking came from. Had he taken the time to consider what that shiver meant he might not have been so surprised by what he saw beyond the window.
But alas, his heart sank at the sight for he knew of his betrothed's lifelong dreams for today. Her desire to be wed on a pristine fall day. Cool, crisp, with a gentle breeze to stir the golden, yellow, and amber leaves. Her visions were filled with the kind of Autumn day ripe with the scent of apples ready to be picked, wheat ready to harvest, and fresh cut wood, ready to be stacked by the fireplace.

But winter had come early, for that clicking sound was sleet striking the window. Outside, every tree limb was covered in a sparkling glaze of ice. Wind, from the far frigid North howled across the land. 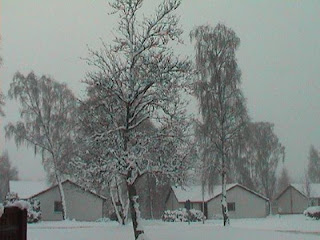 The young man hated that the day would not be everything he heart's desire longed for, but in truth, the weather mattered not to him. He would deliver his I Do's from atop a high mountain peak in a raging blizzard, or knee-deep in a muddy swap at the equator during monsoon, or in a fierce sandstorm in the hottest of desserts.

And later that day, inside a cozy little church, with snow falling from the heavens, and wind swirling around, and ice gleaming all about, he delivered his I Do's. As did the fair maiden.
Today marks the tenth anniversary of that blustery day, thus proving that some fairy tales do indeed come true.

Love,
Travis
Posted by Travis Erwin at 6:52 AM

Email ThisBlogThis!Share to TwitterShare to FacebookShare to Pinterest
Labels: Me, The Family

This is so incredibly sweet :)

I concur with Michelle.
~dubbing Tavis a Knight in the Order of Dear Guys~

And ice covered trees are magical. Surely that was a sign of wonderful things to come in your life together.

Damn, man, you just earned major kudos there. Pretty slick, dude. You should write a book. ;)

It's guys like you acting nice that give the rest of us reject slobs a bad name.

Wow this is the second love story that I've read today! Many wishes to you and your wife!

That was sooooo beautiful!

happy happy day...and this post is a bonus for the wifey!

we will celebrate our 25th soon...we married as toddlers. uh-huh, did so...

How sweet are you. Happy anniversary Travi. I love You!!!

That was lovely man.

How very sweet! Happy anniversary!! I hope you and Jennifer have great plans for the celebration! That don't include sleet. :o)

Aw! Happy anniversary, you two! Not only is that very sweet, but I think you may be right about Jenn and I being somehow related. Autumn's my favorite season as well.

Happy Anniversary and many, many more loving years together.

Nice work Travis. Congratulations to you and your wife. Happy Anniversary.

I hope you guys have a great celebration, and maybe the huskers will actually win for you

How cool! Congrats to both of you! :D

I would be so touched if my husband wrote something like that.

I wish you many more happy years together.

Happy Anniversary! That was so sweet, please tell me your wife will be able to read it?

No wonder you write womens fiction. You're good at this! I agree with Charles--you should write a book or two.

So sweet--Happy Anniversary to the both of you! And many, many more!

That was awesome. Happy Anniversary!

You are so sweet... I hope you guys have a wonderful day and the rest of the days of your life.

What a wonderful fairy tale! It's great to know that they do exist in real life!!

Wow, that beats flowers and candies any day! Congratulations and Happy Anniversary to you both!

Almost Travis!! We were watching at our post game tailgate yesterday and I was hoping you'd hold on

That was so sweet. Very lovely. Your wife is a lucky woman. Happy Anniversary to both of you.

That was so lovely, Travis. Happy Anniversary. (And sorry this is late.)

I just noticed reading this, your anniversary is the same day as my parents'. It's a good day for getting married. They would've been married 49 years (my father passed on a few years ago). May you have the same lifetime of love my parents had. =oD

Happy Anniversary to you both! May you have "tens" more!