I'm back and a fair bit smarter. Oh, you want me to share the knowledge I gained. Fine, here is a list of things I now know ...
Six days in Vegas is about three too many. 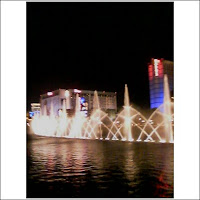 The amount of days spent on Vegas in inversely proportional to the thickness of a person's wallet. (a couple more days I would have had to sell off my blood platelets in order to eat)
A man can take a beating at the gaming tables, but return the favor at the buffet tables. (I hurt them particularly bad at the Paris buffet. None of that gut wasting crap some of you call salad for me. I went straight for the meat - steak, crab legs, shrimp, salmon, some kind of fancy lamb meat that was beyond excellent, but I had to scrape what looked like lawn clippings off before I could chow down)
Close counts in horseshoes, hand grenades, nuclear bombs but doesn't mean a dang thing in poker tournaments. I played in three finishing, 31 out of 129. 17 out of 84 and 13 out of 111. None of which paid me a cent back on my investment.
Elvis's ghost is supposed to haunt the freight elevators at the Las Vegas Hilton. My convention workshops were at the Las Vegas Hilton, but sadly I did not have the opportunity to ride the freight elevators, so I didn't catch up with Mr. Presley, but because I have not gotten a hair cut in so long I am starting to sport some Elvis-esque sideburns. And I did ride in he elevator with a nearly seven foot tall skinny as a rail Elvis look-a-like that spoke some foreign language, Swedish perhaps but I'm only guessing.
Cellphones take really crummy pictures of ex presidents. 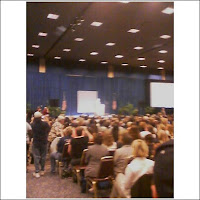 Can you tell that is Bill Clinton up at the podium?
Or that there is even a person and a podium up on that stage?
Yeah me neither, but he was really was there. His speech lasted about forty minutes.
And what did he say? Don't vote republican and if you are going to vote for a democrat you might as well pick his wife. Sure he said more but that basically sums it up. I did see a funny shirt which read, Hilary in 08 because only a Clinton know how to clean up after a Bush. 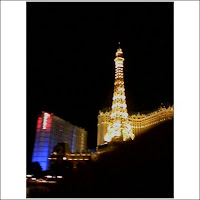 Me being a Union Steward and all, I went to Vegas on my local Union's dime so of course I learned all kinds of new ways to chunk rocks at management and defend my fellow workers rights, but I won't go into those details here. The national gathering is on Vegas again next year so there will be a sequel to this adventure and I'm happy to say next time I'm staying at the Paris because I was less than thrilled with the Sahara. I plaque by the elevators claimed that the Beatles stayed in the same tower as me back in 1964. I'm thinking that was the last time they updated the rooms.
Stay tuned for my next post which will be filled with details about my latest battle with Lady Luck and her evil sister Karma(who according to one flyer I was handed on the street is available for a one one one private and totally nude strip tease in your hotel room). And yes for those veterans of this blog there will be more Bulgarian women involved. Click on the links if you do not know what I am talking about.
skirmish #1 Lady Luck - All Greased Up July 10th 2007
skirmish # 2 I lifted this straight from this old post dated July 10, 2007 if you wanna read the whole thing. It is the first mention of the Bulgarians.
So I left the casino and drove right past the place with the hot oil wrestling, despite the therapeutic value to my body hair. Thanks to those who commented and offered hair care advice for my wooliness. Apparently I have done something to offend Lady Luck and my guess she would have showed up at the bar with along with the entire Bulgarian women's (and I use that term loosely) weightlifting team and all of them would want to tangle with me. Though who knows,they may be hairier than me.

skirmish #3 From the next days post dated July 12, 2007. Another brief mention of Bulgaria ... All of a sudden I'm big in Bulgaria. (After that crack the other day about their women's weight lifting team.) I've had nearly a dozen hits from the country since then so if any of you spot a gaggle of big hairy women headed my way A warning would be in order.

skirmish #4 Karma joins the fray Are Those Teethmarks On My Butt?

There are more but these should be enough for you to get the general idea and I have a lot of catching up to do after being gone for a week. In the words of Tigger ... Ta-ta for now.

Email ThisBlogThis!Share to TwitterShare to FacebookShare to Pinterest
Labels: Karma, Lady Luck, Me, My Travels

I can't believe none of your finishes paid out.

I agree, Veags trips should be about 3-4 days.

waaait a minute... i thought what happened in vegas stayed in vegas?

aren't you breaking some kind of law?

Welcome home Travis. I'm sure the Mrs. and your children are happy to have you return. I'm sure they would have been happier had you won oodles of dollars and saw the ghost of Elvis. :)

Well at least I won some money. Ha hahahaha. I won enough to buy the boys oodles of clothes, enough facial stuff for a year a new Coach bag and even brought money home. Too bad for poor Travis, I did buy him stuff too. It was fun the Sahara is not fun. You could have thrown a cat through the gap under the door. It served as our light for all of the bulbs were out of the lamps in the room. Yeah for us. The view out of the window was a brick wall. Who cares I won money. Poor poor Travi. I cannot wait to stay at the Paris. That is a good location it is is the hubub of it all. However we will probably go before next August.

How about them Huskers!!!!

I freaking love Las Vegas can I go with next time, I am tons of fun to hang out with I promise

Pretzel, now I can't get the song out of my head--"saw the ghost of Elvis up on Union Avenue, followed him up to the gates of Graceland . . ." Not even in the right city.

Oh well, I really only hate it when some one puts a song I don't like into my head. I've always like "Walking in Memphis."

Jenn, good for you!

Glad you had fun. That's pretty good in the poker tournaments. No way I could have gotten that close. I'm sure I would have been in last place.

Better to have that song stuck in your head than Banana Phone. I hate when I can't get that damn thing out of my head. :)

welcome home. the buffets sound awesome. your post made me hungry!

I've never been to vegas. I am such a loser! 6 days does seem like a long time to be there, though...

too bad you didn't hit the jackpot. you'd share it with your blog faithful, right?

Hehehehe--love the Clinton line. I need to get that shirt.

You did suprisingly well in your tournaments! Sorry you didn't get any payouts.

Welcome back. And again, loved your short story. :)

Fun update. Sucks when you don't get a ROI, especially in poker. I'd settle for something a littler closer to the win (like, final table maybe?) even if it didn't pay back what I invested. Going out that close to the end just blows.

And you really didn't think Clinton would have anything profound to say that didn't amount to a campaign for his wife, did you? Funny shirt, though.

Why does minced grass make a meal fancy?
Vegas should only be a weekend long.