My Town Monday -- Eye of The Beholder 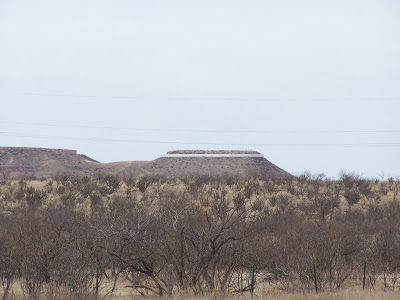 It's not a bird .. nor a plane. It's not Superman, or even a flying beagle. Nope, the above picture is your average, everyday floating mesa.

At least that is what it is supposed to look like. Actually it's just a mesa with a white fence built around the top. As you can see in this shot taken a bit closer. 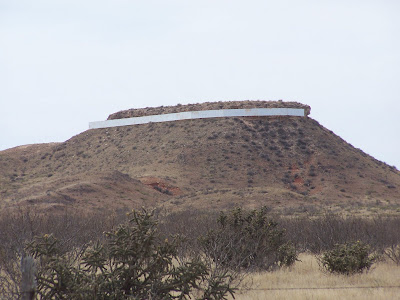 Stanly Marsh the 3rd is the man behind this structure and several more oddities near and in my hometown, of Amarillo, Texas. And yes, I used the numerical version of three on purpose. Stanly has been quoted as saying anyone with a roman numeral after their name is just being pretentious.

Stanly is a man of wealth. His grandfather was one of the early oil and natural gas man of the Texas Panhandle. I'm not exactly sure how old he is but I'd guess upper sixties or early seventies. Here is a picture I found at this site commemorating the 20th anniversary of Sir Stanley's best known project. He's the one in the top hat. 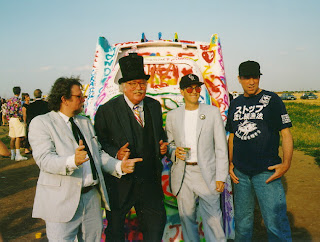 And here are some shots of that project. 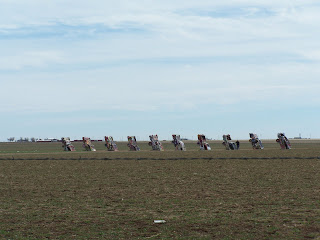 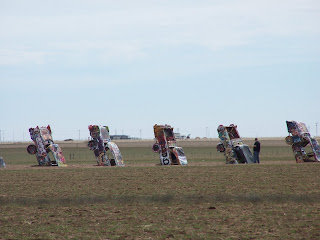 This is the view from I-40 of Cadillac Ranch.

Created in a wheat field back in 1974 this roadside attraction has been long been associated with Amarillo. It is one of the things I'm often asked about when traveling. The cars, all Cadillacs ranging in year models from 1949-1963 are buried intact nose down. They are located on private land(owned by Mr. Marsh but the public is encouraged top walk out and even spray graffiti on the vehicles.) Cadillac Ranch has been the subject of songs by Bruce Springsteen, Chris Ledoux, numerous Texas artists, and the Christian rock band Family Force 5.

It has also been featured in commercial and many movies. Most recently in the Disney Movie Cars. Notice the scenery in and around Radiator Springs and the description on the map which says Cadillac Range. This part of I-40 used to be Route 66 so if you've seen the movie you know why it was used.

Stanley has many other projects and I was going to include some of them in this post, but I think I'll wait and break this down into two parts since it is already getting on the long side. But here are a few teaser pics. I'll explain them and post more shots next Monday. 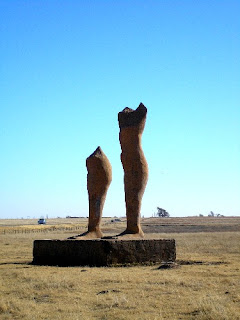 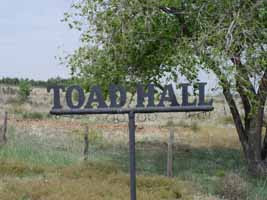 I will say not everyone in Amarillo has a high opinion of Stanley, his pranks, or art. But I tend to think every town should have a Stanley Marsh the 3rd if for no other reason than to keep things interesting. He's not one to care what other think as is clear by this quote.

"Art is a legalized form of insanity, and I do it very well." ~ Stanley Marsh 3


This post is part of My Town Mondays and sadly, I am the man behind this blogworld oddity. But I'm proud to say many have joined in on my crazy idea. I will link to them below as they post their town's story for the week, so check back over the next few days and learn about other cities and communities all over the globe. And if you wish to join in we'd be glad to have you. Just drop me a line in the comments once you post.

Josephine Damian -- Introduces us to New Rochelle, New York with an interesting bit of history.

Lana Gramlich -- Takes us on a visual tour of Abita Springs, Louisiana

Barrie Summy -- Is getting sealy about a San Diego, California beach (sorry for the bad word play but I couldn't resist)

Word Vixen -- Tells us about a unique store in Lancaster Pennsylvania called the Rhubarb Market, but sadly she doesn't mention Rhubarb Pie.

DebbieLou -- The pubs and spirits of Bishops Stortford, England

Laura Kramarsky -- Last week at the Women of Mystery blog Terrie Farley Moran gave us a look at Book Row in NYC. This week Laura tells us what it was like to be a young book lover in East Hampton, New York.

Lyzzydee -- A look at a Welwyn Garden City, England landmark.

The Anti-Wife -- Gives a detailed look at her childhood in Southern Illinois.

Britta Coleman -- Hot Dogs and politics. Does life get any more American than hers in Fort Worth, Texas.
Posted by Travis Erwin at 12:01 AM

I've seen Cadillac Ranch and am happy to now know the history behind it.

It also appeared in a story by Joe Lansdale, who is a Texas native. "Across the cadillac desert with Dead people" was the title, I think.

I have also seen Cadillac Ranch. That's an awesome sight from I-40.

Thanks for the oddity of history.

It is good to have people in a town like Mr Marsh. I like people who have a little fun in life. Who cares what other people think. Do what you want. You do not want people to remember you as a big bore. What is the fun in that? Live life well, you are only here for a short time.

I love Stanley, too. We may have to arm wrestle for him.

There is a big My Town Monday treat a-waiting over at www.womenofmystery.net

Nan Higginson has posted a link to "Casino Gamble," her short story which was nominated for an Agatha Award this week. The story is from the anthology, Murder New York Style. It isn't set in New York City but in what we lovingly call "The Outer Reaches," and gives insight into a New York world that will interest and surprise you.

Cadillac Ranch sounds familiar, and you may be the person who informed me of its existence...

"Art is a legalized form of insanity, and I do it very well."

Hmmmm, personally, I think you'd have to be crazy to say something like that but I suppose Stanley would simply take that as proof.

Mine is up for the viewing!!!

OK. Great. Now I'm gonna have that Springsteen song playing in my head all night long.

Anyway, count me in for MTM: New Rochelle, NY for this gal.

Hey Travis
Sorry I haven't been here in awhile been Busy! I like this idea, I would be a part of it but my town is so small it would all be covered in one post for sure haha. :) Cool pics though.

I hadn't heard of Cadillac Ranch until now. Weird!

I put up a post for San Diego on a beach taken oven by seals.

I've always wanted to be eccentric- I've heard that being rich is a prerequisite.

What a great guy! - my kids love the movie "Cars" - Stanley is the name of one of the characters by co-incidence (?)

Have written my part 2 of My Town Monday.

FYI, it appears that "Barry Summey's" link leads to my post...

Thanks Lana, I got it fixed.

Thanks for sharing. I enjoyed reading about the origin of those Caddy's.

Hi Travis,
I have posted my entry for the week, I have chosen a famous local landmark. I have also explained netball for you!!!
I am so proud that I have managed an entry on a monday!!

I remember reading about Cadillac Ranch. How cool.

I've posted a My Town Monday on my blog. Thanks for doing this. It's very interesting.

You're right...every town needs a Stanley!...& of course he's the guy in the photo with the top hat...how could he not be?

Funny. The Cadillac Ranch reminds me of Carhenge in Alliance, Nebraska, about 35 miles from my hometown. It's cars buried in the ground in the same formation as Stonehenge in England.

WTF is up with the clay statues of the legs?

Anyway, wasn't that guy in the top hat at the Big Texan the night we were there?

Glad to get a piece of your town's history again.

Wow Cadillac Ranch looks awesome! So does the mesa with the white picket fence.

I think he'd be a cool guy to hang out with that's for sure!

I heart Texas, for reasons like this.
What a fun guy!!! I would love to see Cadillac Ranch!
And the mesa is beautiful!!!

Travis, this idea of yours is wonderful!!!!

I haven't read all the hometowns yet, but I am looking forward to it. All the contributors should try to co-publish a coffee-table book!! (but please wait til I do one on Baltimore!)

Okay I'm bucking the trend here.
I'm not a big Stanley Marsh fan. Worked for him in a round about way and saw what happens to good people when you don't do what Stanley wants.
Yes he is worth billions and I always wonder what he does for Amarillo(in the way of philanthropic good)instead of the weird things that bring him fame.

I'm enjoying your My Town Monday series. I had never come across the Cadillac Ranch or Stanley before. The Midwest and South seem to be particularly rich in eccentrics. Makes up somewhat for having fewer beaches, mountains, and other amenities.