I've missed the camaraderie of My Town Mondays and I have a few others in mind that I'll try to find time to write up in the next couple of months or so, but for this post, my first My Town Monday since calling it quits I want to tell all of you about a just released book from a friend of mine. Before I tell you about the book let me tell you about Ron. 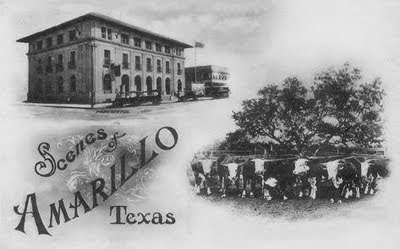 Ron Smith is a friend of mine. A former coworker who just recently retired from the Postal Service to pursue the good life. Ron is long time supporter of my own writing endeavors. Ron isn't a writer in the traditional sense that he creates characters and stories. Ron is a collector, an antique addict and an all around great guy. For better than 20 years he has collected postcards about Amarillo and the Texas Panhandle and in that time he has amassed a huge collection of visual history on the area. it is that collection that gave birth to his book aptly titled, Amarillo.

Amarillo is available from the Arcadia Publishing website as well as area bookstores, independent retailers, and on-line retailers, such as Amazon. The book showcases over 200 postcards from Ron's nostalgic collection. Arcadia Publishing is the leading publisher of local and regional history in the United States.

Highlights of the book include :

* Never before seen vintage postcards from the author's collection
* Includes images of historic buildings, many of which are long gone
* Explains how Amarillo went on to become one of the world's busiest cattle shipping points in the late 1890s
* Shows Amarillo in the making through postcards

Here are a few more images Arcadia marketing team sent for me to share with y'all. 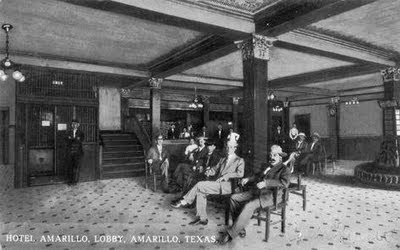 The above shot is a 1910 photo of the long gone Hotel Amarillo which was located at 3rd and Polk.

And below is another 1910 shot of the Opera House which sat at 7th and Polk. A Thanksgiving Day fire destroyed the building in 1919. 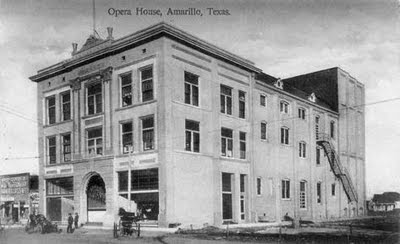 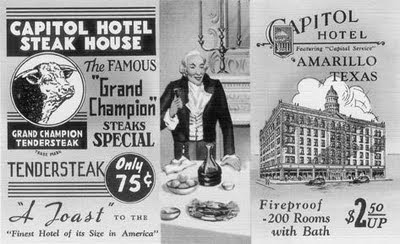 Man Do I wish I could get a good steak for seventy-five cents today. And how about a motel room for two-fifty. And fireproof to boot. Trust me, I know the value of fireproof. The Capitol hotel was demolished in 1977.

And check out this next card. Cable cars right here in Amarillo. Who'd of thunk it? Of course back in 1914 when that shot was snapped, Polk Street was still dirt. 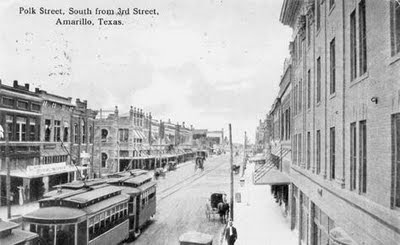 The book is chocked full of great pictures and the captions provide some great history. I've already learned lots of cool things about the city, and thanks to the generosity folks at Arcadia two of you can have the same privilege without spending a dime. That's right, the publisher is providing two free copies to the readers of my blog. It's up to my discretion how to award these so, I'm going to have a little contest.

Between now and Friday answer these five questions for your shot at a copy. I'll award one copy to the most accurate, and one to the commenter that entertains me the most with their answers. By the way every answer has appeared in one of my previous My Town Monday posts.

Ron will soon be signing copies of his book at both the local Barnes and Noble as well has Hastings
And at the Panhandle Plains Historical Museum in Canyon at 11:30 AM on October 10th.

I love your friend's book idea, Travis. I also loved your post. I'm glad you will be sharing bits and pieces of Amarillo with us every so often on MTM. I love learning about your town (and reading your humorous writing).

What a great idea for a book! I bet it will be an interesting signing!

Oh, and I mentioned you and fishing in MTM post!

I am so happy you brought MTM back in your posts. I have missed them and your MTM are the only ones I read.

Great pictures and a wonderful idea for a book. Your friend is brilliant and I hope he profits greatly from it.


As for your questions

4. restaurant and bar
5. Gene Howe? Did you mean TexaN?

An MTM well worth waiting for! I love the postcards.

I am going to have to own this book!

I love the old time postcards. It's so cool looking at advertisements from long ago!

1) The city of Amarillo, was originally called ___Oneida, and Ragtown______?
2) Amarillo was once known as The ____Helium____ Capital of the World.
3) Amarillo has four public high schools. I'll give you name of each and you provide rest nickname.

I didn't remember them all!cI have to have that book though, one way or another, thanks for bringing it to my attention.

1) The city of Amarillo, was originally called _Oneida_.

2) Amarillo was once known as The _Helium_ Capital of the World. That was actually self proclaimed.
But then again Texans tend to be a bit big for their britches.

3) Amarillo has four public high schools. I'll give you name of each and you provide rest nickname.

4) If I tell you to meet me at The Golden Light chances are we are going to _eat, drink & be merry as we sing "God is great, beer is good and people are crazy"_.

5) "The Tactless Texan" is better known as _Editor Gene Howe_. If only we had such writers and editors today, maybe we the readers would have better wisdom.

I've got no idea what the answers to most of those questions are, but I'm guessing that the Golden Light is either a drinking or a dancing establishment. Am I smart or what?

Sounds like a really good idea for a book about a city. I'd love to find one like this about my own hometown.

What a Neat book! I just love old postcards, and congrats to your pal for getting his passion into print. Coolness!

So the quiz- AMARILLO:

1) Was originally called in native langauge Sawagansetta Jaxie-Ahoo, meaning "We stopped here when the horse died."

- The Caprock Poprocks, re-named during a cutesy 80's phase when students were being allowed to vote and name their schools after hippos, et al.

-Palo Duro Hard Sticks, because in TX, we like to maximize ESL and bilingual educational opportunities.

4) Meeting at the Golden Light means we're drinking rum runners until we see our own halos.

5) Now that's just too easy to bother with.

What a wonderful book! Congrats to your friend - please tell him to enjoy all the moments.

I'll order his book when it comes out :)

Wow those pictures are great and interesting :) I have a friend who just got published his book is out now I am thinking of getting it.

I love contests can I be the judge? haha

I just love those postcards! I love flipping through local history books. They're the best history books of all.

I like the idea so much, I'm going to buy the book!

Ok, since I'm FROM Amarillo, I had better rep-ree-zent here!

1) The city of Amarillo, was originally called ___Oneida______? I believe anyways...I somehow remember a reference to it WAYYYY back in HS..

2) Amarillo was once known as The ___Helium____ Capital of the World.
I think that was a load of crap. What? A big ol' spire looking thing and a teeny tiny museum thing over there by the park? Sheesh.

3) Amarillo has four public high schools. I'll give you name of each and you provide rest nickname.

4) If I tell you to meet me at The Golden Light chances are we are going to __have the best damn burgers in the world!_____.

5) "The Tactless Texan" is better known as __one who spits on the other dude's boots??__

ok, totally freaking clueless on this one!. lmao!

Old postcards are a great way to see the past in living proof.

Congrats to your friend Ron. Very cool news indeed Travis. I just had a friend move to Amarillo and she might like this bit of history. And it looks like I am little late getting to the answers so I will not cheat and just write down what they said but good luck to all those who entered and I know you will pick two good winners.

Congratulations to Ron! I just love it when someone comes up with an amazing idea...it sounds like Ron did!

Good on ya' for talking up your friend's book. I think I'll step away from the contest. Seems to me that your Texas-based readers would be most interested in winning (not to mention, most likely to get the questions right. ;))

I kinda miss MTM, too. HAven't had time to post my own...

I can't seem to get motivated without you :0(