Pop culture in nothing more than flotsam and jetsam, floating in and out on the tide of public opinion. Tickle Me Elmo dolls, parachute pants, Spuds MacKenzie, and a whole slew of other fads have rode the waves of popularity only to eventually sink to the murky depths of nostalgia.

I have surfed along with the masses a few times in my life, but for the most part I'm a contranarian and shun the so-called in-thing. On occasion, some idiotic things catches on that grates on my very last nerve. So much so that every time I see it I can't help but question the intelligence of those who choose to float in that boat. And one such trend is the pissing Calvin. 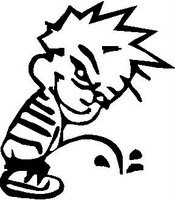 I'm talking about this guy in case you are blind and have misses the plethora of stickers bearing the likeness of the urinating comic character. The victim of Calvin's stream varies and can be anything from a sports team, brand of automobile, Government Agency, or political party. Yesterday I spotted one of the decals on the back of a pickup. There was the peeing C-man tinkling away on the name Osama Bin Laden.

One word came to my mind. Asinine.

What's the point? To let your fellow drivers know you don't like the terrorist? call me stupid, but I thought that was pretty much a given among all Americans. Maybe Pickup Paul was hoping to raise Osama's ire and draw him out of hiding? Maybe Pickup Paul knows what the G-Men do not. All this time the leader of the Taliban has been hiding here in Amarillo, Texas biding his time. Why i bet he's making a living as the front man in ZZ Top impersonation band.

All these years, Osama has been right here in Texas, hiding under Ol' W's nose, playing guitar licks in local bars and hatching his next murderous scheme. I can see it now.

Osama is on his way to Boot Scootin' Boogie's to play a set when he idles up to a red light and there is Pickup Paul. The very sight of Calvin pissing on his name finally causes Osma to snap and fore go years of patiently hiding. Jamming his Hyundai in park (you didn't expect Osama to drive an American car did you?) Bin Laden yanks Pickup Paul out of his truck and commences to thrash him, but other motorists intervene to help and when they cops arrive they find a turban and aerial photos of Pantex inside the glove box of his Hyundai. (Pantex is Amarillo's local nuclear disarmament plant)

As they handcuff Osama and haul him away, he'll mutter in true Scooby-Do style, "And I would have gotten away with it too, if it weren't for that meddling redneck."
Posted by Travis Erwin at 10:07 AM

Email ThisBlogThis!Share to TwitterShare to FacebookShare to Pinterest
Labels: a strange world, I'm a Doofus, Texas

Hahaha.. That's an awesome scenario. The pissing Calvin irritates me too, not just because he's obnoxious, but because Bill Watterson, the creator of Calvin and Hobbes never gave permission to have his characters licensed.

Not only is pissing Calvin annoying and crude, he's also technically illegal.

You always make me laugh, Travis!
Say, Spuds looks like Heff in that shot-

I found the pissing Calvin funny the 100 times or so. Not so much now.

LOL If only we all knew that putting peeing Calvin on our cars would draw terrorists out of hiding.

My husband hates that decal too. I think it's mostly because he likes Calvin and hates seeing him degraded in such a way. But, he also has a theory about the correlation between truck height/size and intelligence. :)

LOL!! Love your rant, Travis. I totally agree with you.

I do not like stickers on my car period. I buy a new car, I am out in the drive-way with a hairdryer taking off the dealer sticker that stuff drives me crazy. So having a sticker of someone tinkling on my car would never happen.

I can always count on you for a laugh, Travis! Thanks!

I am a huge fan of Calvin and Hobbes. Don't much like the sticker, but it doesn't annoy me near as badly as the rubber testicles I see hanging off the back of pick-up trucks.

Yeah, Travis, what's your opinion on truck testicles? Now there's a scourge on the highways!

Yeah that tide left the beach a looooong time ago. Now Calvin pissing on a smiley face...that might be funny.

I disliked the "Pissing Calvin" so much that I had a decal made of me peeing on the peeing Calvin! Would that be redundant...or just plain nuts?

I thought the pissing Calvin was funny at first, but then, like a lot of those pop culture icons, it was overplayed and now it's just dumb.

Your description of Bin Laden getting caught and uttering the Scooby Doo closure cracked me up. :)

Re: Kasie's comment. I totally agree. Calvin & Hobbes is my all time favorite cartoon and the whole pissing Calvin thing reduces it to something far less than it is.

What about the Santa Clause kneeling at the manger *laughing*!

I hate that pissing sticker, too. But truck testicles, those both strike me as appallingly tacky and funny. I always laugh at them and then feel ashamed of myself, lol.

That was great about the pissing on terrorists! LOL!

Ain't it the truth!

Your other wife said...

I wonder where all your ranting comes from. You should write a column of some sort. You say what we all think alot of the time. I hate that sticker what kind of ass puts that on his car? No one I want to know I do think the ex would have one though!